Saints' Hill, Davis, 9 others are back, Williams to reserve 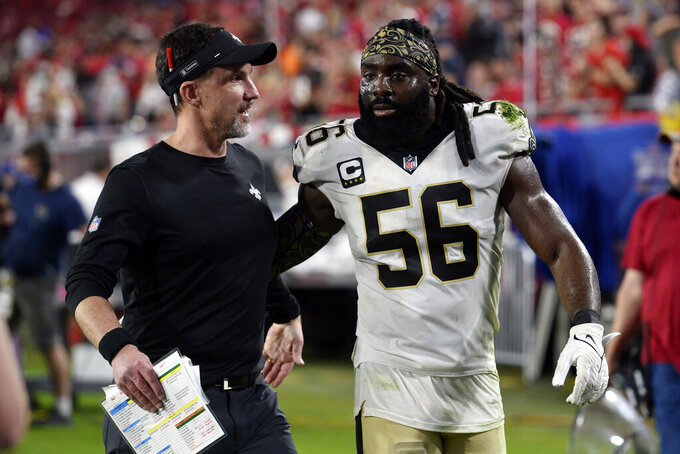 NEW ORLEANS (AP) — Saints quarterback Taysom Hill and linebacker Demario Davis were among 11 New Orleans players who rejoined the active roster Wednesday from the COVID-19 reserve list, while starting free safety Marcus Williams was placed on reserve because of a positive COVID-19 test.

Last week, an outbreak forced the Saints to remove 16 players from their active roster and place them on reserve. They all missed Monday night's 20-3 loss to the Miami Dolphins — a game in which the Saints started rookie Ian Book at quarterback.

A week earlier, Saints coach Sean Payton missed practices and a game at Tampa Bay because of a positive COVID-19 test.

Hill who began the season as a reserve when Jameis Winston was New Orleans' starting QB, had started the previous three Saints games before Monday. He previous two starts came in victories over the New York Jets and Tampa Bay Buccaneers.

Other prominent regulars returning to the active roster included linebacker Kwon Alexander, tight end Adam Trautman and reserve safety J.T. Gray, a co-captain who was named to the Pro Bowl this season for his special teams play.

Defensive lineman Christian Ringo, a regular reserve on the interior of the defensive line, returned from the COVID-19 list, as did offensive tackle Jordan Mills, who started at Tampa Bay when offensive tackles Terron Armstead and Ryan Ramczyk were out with injuries.

Ramczyk, was trying to come back from a knee injury that sidelined him five games when he tested positive for COVID-19 last week, costing him a sixth game. He has not rejoined the active roster yet and it's also unclear whether his knee has recovered to the extent that he could play if activated.