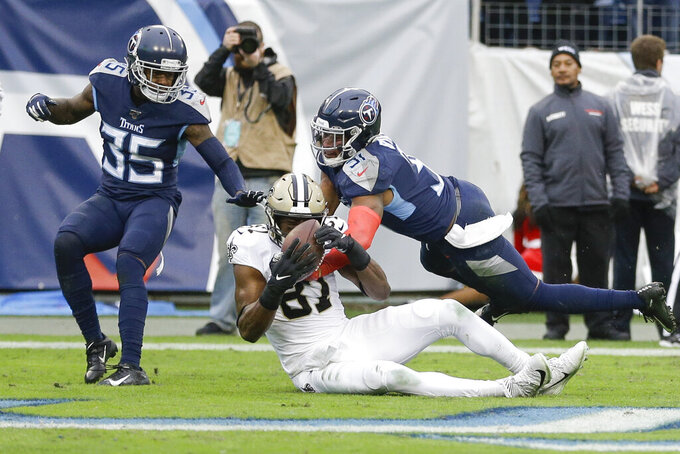 NEW ORLEANS (AP) — The New Orleans Saints' playoff readiness was tested during their trip to Tennessee.

The results were mostly encouraging.

After a first quarter plagued by penalties and defensive breakdowns, the Saints were down by two touchdowns on the road, in the rain, against a Titans team also trying to earn a postseason berth. New Orleans' response was emphatic; the Saints outscored Tennessee 38-14 the rest of the way to win by 10.

“Definitely a tough situation," Saints tight end Jared Cook said. "The weather's not there. The crowd's not in your favor. ... Just a bad day with penalties and you're down 14.

“It's a testament of the type of talent this team has to fight back,” Cook continued. “It's a testament of our defense because they helped us out a lot. ... It shows the will of this team to continue fighting, just never giving up. But that's obviously not a position we want to be in next week or continuing into the postseason. You never want to get down or start a game off slow like that.”

By the end, Brees had another three touchdown passes, increasing his career-record total to 544, five ahead of New England's Tom Brady and the retired Peyton Manning. Cook caught two of those TD passes — one of them a season-best 61-yarder. Michael Thomas added a touchdown catch on a day he reached an NFL-record 145 catches in a single season, breaking Marvin Harrison's 2002 mark of 143.

“The record, it's broken and it's going to be extended next week. That's all I'll say,” Thomas said. “Right now, I'm playing for my team.”

Alvin Kamara scored for the first time since Week 3 on a 40-yard run and punched in a second touchdown from a yard out. Brees said Kamara's production was gratifying to the Saints after seeing him go an unusually long stretch without scoring.

“It weighs on all of us because he is such a big part of this offense,” Brees said. “Hopefully, there is a lot more where that came from.”

Meanwhile, rookie defensive back C.J. Gardner-Johnson caused a pivotal fumble with a hard hit on a receiver over the middle.

“I’ve got way more from where that came from,” Gardner-Johnson asserted. “I’m young, I’m still learning.”

New Orleans' offense as a whole appears to be peaking as the playoffs approach. The Saints have averaged 39.3 points and 422 yards during their past three games.

The Saints still have yet to solve their season-long penalty epidemic. They were flagged 11 times for 70 yards. Four were holding calls; three false starts.

“We’ve just got to focus on attention to detail and clean up some of the messes we're creating on our own, because I feel like when we play clean nobody can stop us.” Kamara said.

Cook was a big part of why the Saints came back at Tennessee. His touchdown catches gave him four in his last three games. Six of his eight TDs this season have come in the past six games. That's more like what the Saints expected when they signed him away from Oakland as a free agent last offseason.

“I had one of my best years last year in Oakland, so that success was something that kind of drove me to find a new home to where I could have the same or similar type of success," Cook said. “That's how you have fun in this game — dominate.”

Cornerback Eli Apple injured his ankle at a most inopportune time. Apple has started at cornerback all season, but now could lose that job to recently acquired veteran Janoris Jenkins, who was claimed off waivers from the New York Giants last week and played 27 defensive snaps in his Saints debut.

In addition to Apple, safety Marcus Williams hurt a groin. That forced New Orleans to move cornerback P.J. Williams to safety. The Saints also played without right guard Larry Warford, who hurt his left knee a week earlier, and starting safety Vonn Bell, who hurt his knee in Week 14. Guard Andrus Peat, who was back at practice last week for the first time since fracturing his arm, also was held out, but should return for the playoffs if not the regular season finale.

92 — The number of games in which Brees has passed for three or more touchdowns in his career.

The Saints (12-3) conclude their regular season at Carolina knowing that a victory gives them a shot at one of the top two seeds in the NFC playoffs, the benefits of which include a first-round bye and home game in the divisional round.