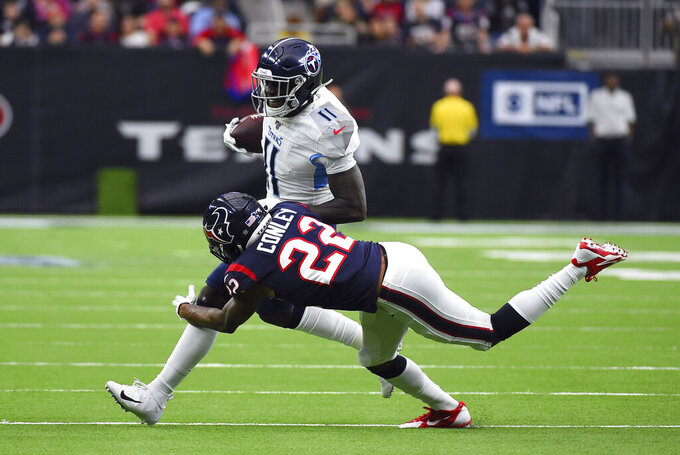 FOXBOROUGH, Mass. (AP) — With a few exceptions, the Patriots' defense demoralized opposing offenses this season by limiting big plays and opportunities in the red zone.

It will face a Titans offense in Saturday's wild-card round that was the best in the league in both categories.

Tennessee comes into the postseason with one of the NFL's hottest offenses. Quarterback Ryan Tannehill led the NFL with a career-best 117.5 passer rating. He joined Sammy Baugh and Joe Montana as the only quarterbacks to complete at least 70% of their passes (70.3%) and average at least 9 yards per pass attempt (9.6).

The Titans also forced defenses to keep tabs on running back Derrick Henry, who had a league-best 1,540 rushing yards to pace the league's third-ranked rushing offense (138.9 yards per game).

The efficiency of Tannehill and Henry helped open up the field for a unit that was tops in the league with nine plays that went for 50 yards or more and scored touchdowns on a league-best 75.6% of its trips inside the 20-yard line.

Tennessee only had 45 drives in the red zone this season, ranking 25th in the league. But when the Titans get there, Patriots coach Bill Belichick said they showed an ability to get into the end zone in multiple ways.

“They do a good job of getting the ball to everybody and they have, obviously, the best running game in the league,” Belichick said. “When you combine those two things and the quarterback — the quarterback can move down there, too. But, honestly, they’ve skipped over the red area a lot.”

The Patriots have allowed only three passing plays of more than 50 yards this season, but safety Devin McCourty said players such as Titans rookie receiver A.J. Brown have shown a unique ability to turn plays such as reverses or short catches into big gains.

“Obviously, they’ve got a lot of guys that can beat you vertical. But you watch them, it’s a quick slant or a slim post and A.J. Brown catches it, now he breaks a tackle and now you’re trying to catch a guy that you’re not going to catch,” McCourty said.

Brown has four touchdown catches of at least 50 yards this season, joining Isaac Curtis (five in 1973), Willie Gault (four in 1983) and Hall of Famer Randy Moss (five in 1998) as the only rookies with at least four such TDs since the merger.

In addition to players such as Brown and Henry, McCourty said they'll also have to account for tight end Jonnu Smith, who had a 57-yard run against Houston in Week 15 and caught a 41-yard TD pass in Week 16 against New Orleans.

“A lot of it is going to come down to obviously, you can’t let the ball behind you,” McCourty said. “You can’t let your guys run by you.”

Limiting Brown's ability to stretch the field will be one of the Patriots' top priorities this week, with the primarily coverage responsibility almost certainly falling to cornerback Stephon Gilmore.

Gilmore was New England's top defender in the secondary this season, leading the team with six interceptions and 20 pass breakups. He is also looking to bounce back after struggling against Miami receiver DeVante Parker in the Patriots' loss to Miami last week. Parker finished with eight catches for 137 yards.

Gilmore said he doesn't anticipate any lingering effects from that game.