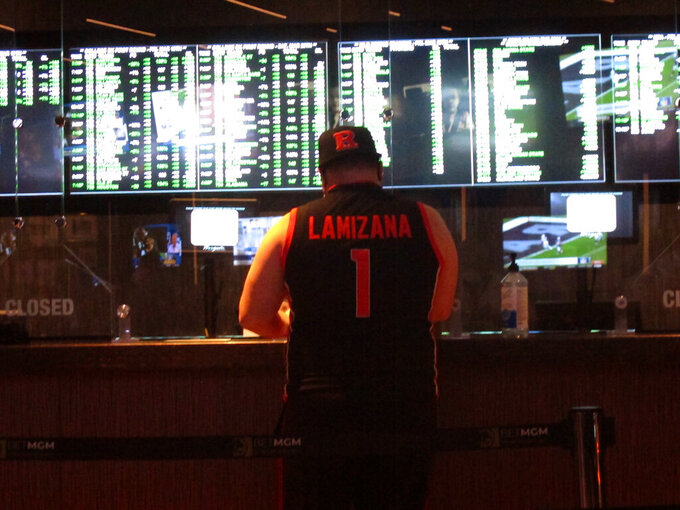 A man makes a sports bet at the Borgata casino in Atlantic City NJ on Friday March 19, 2021, the first full day of the NCAA March Madness tournament. Last year, it was March sadness as the NCAA college basketball tournament got canceled days before it was supposed to start, due to the coronavirus. (AP Photo/Wayne Parry)

A typographical error in a betting line on a Cleveland Browns-Kansas City Chiefs game in January led to a $10,500 windfall for nine eagle-eyed bettors.

The error was revealed last week by the New Jersey Division of Gaming Enforcement, which fined BetMGM.com $500 for failing to properly display the odds on a betting market.

It involved the Jan. 17 game, specifically a so-called proposition or “player prop” bet on the game performance of the two quarterbacks, Cleveland's Baker Mayfield and Kansas City's Patrick Mahomes.

In such bets, gamblers wager on whether a particular player or group of players will exceed a certain statistical benchmark, or fall short of it.

In documents released by the state, it was revealed that BetMGM intended to offer bets on whether Mayfield and Mahomes would each pass for 300 or more yards in the game.

But due to a manual error in posting the bet, the “3” was dropped, and bettors were given the option of betting on whether the two quarterbacks would pass for “00” yards or more during the game.

If either quarterback completed just one pass for just one yard, the bet would have been a winner. The pair combined for 459 passing yards.

Five customers of BetMGM pounced on it, as did four on Borgata Online before the odds were corrected. Borgata is owned by MGM Resorts International.

According to state documents, MGM reported the error to the gaming enforcement division and sought permission to void the bets on the basis that the odds were improperly calculated.

The state responded that the bets could not be canceled until after an investigation. That same day, the company decided to let the bets stand and to pay them off; BetMGM confirmed Thursday it had paid the bettors.

Ironically, one of BetMGM's main enticements for new customers is a no-brainer bet, one designed to be so easy to win that it's almost a given. A typical incentive would be a $100 payoff on a $1 bet if a customer's chosen team scores a single point in the game.

It was not the first time a technical error led to an unexpected payout for sharp-eyed bettors.

In Sept. 2018, when legalized sports betting was in its infancy in New Jersey, FanDuel agreed to pay a Newark man $82,000 on a ticket he had featuring wildly inflated odds resulting from a technical glitch; correctly priced, the bet should have paid $18. Several others who made the same bet during a computer glitch that lasted only 18 seconds also were paid.

FanDuel initially sought to void the bets, but then changed course and agreed to pay them, according to state documents.

Most sports books have policies that state they are not obligated to pay off on obviously incorrect betting propositions, known in the business as palpable errors or “palps.” But nothing prevents companies from choosing to honor the bets voluntarily.