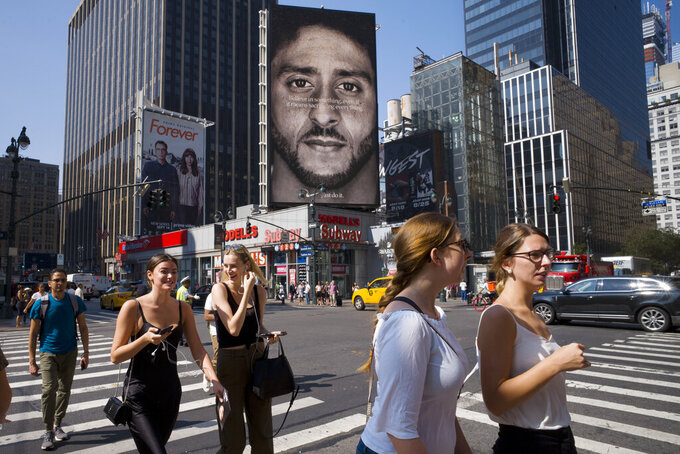 FILE - People walk by a Nike advertisement featuring Colin Kaepernick on display, Thursday, Sept. 6, 2018, in New York. While sports have always been indivisible from politics and public conflicts, there has been a major ground shift in the years since Michael Jordan made public neutrality on all non-sports issues an essential part of his brand. Now, there is almost an expectation of advocacy, especially with the precedent set by Colin Kaepernick's protests and the embrace by many of the Black Lives Matter cause. (AP Photo/Mark Lennihan, File)

LOS ANGELES (AP) — The pandemic-era saga of tennis star Novak Djokovic in Australia this week is but one of many: Pro athletes who have refused to be vaccinated have been put at center court in a larger contest — as famous faces who are becoming proxy players in the accelerating worldwide cultural battles over COVID jabs.

The NBA's Kyrie Irving missed the first months of the Brooklyn Nets' season before making a partial return. The NFL's Aaron Rodgers went from revered veteran to polarizing figure. And we're still not finished with the diplomatic standoff and fallout over Djokovic's exemption to play in the Australian Open.

It's a cultural issue, not a question of numbers. The vast majority of players in professional sports organizations are vaccinated — more than the U.S. population at large — and tacitly or explicitly accept the evidence of their safety and efficacy. But the handful of high-profile objectors represent a new front in what one expert calls the “oversized role of sports” in society's conversations.

“We look to sports to give us an answer or clarify issues in the larger culture,” says Robert T. Hayashi, an associate professor of American studies at Amherst College in Massachusetts whose specialties include the history of sports. ”Many times, the most detailed conversations we see arising in the culture and the media are regarding sports."

Their centrality is not necessarily because they are exceptional, but because they serve as avatars for all of us.

“They are all different individuals. They have different approaches,” says Dan Lebowitz, executive director of the Center for the Study of Sport in Society at Northeastern University. “Athletes," he says, "are no different than really the whole of humanity.”

And in that sense, they are subject to the same information and misinformation — the same receptiveness or stubbornness — as the rest of the population.

“We live in a world where we’ve moved really far away from a central set of facts,” Lebowitz says. "None of these athletes are impervious to all the information that’s coming at them around the world, or impervious to the divisions that we have.”

While figures like Irving, Rodgers and Djokovic are at the center of the conversation, they may not actually be driving it. COVID vaccines, in their brief existence, have been fast-tracked into an elite group of divisive political and cultural issues — things about which people tend to pick a side and stick to it no matter what.

Mark Harvey, a professor at the University of Saint Mary in Kansas and author of “Celebrity Influence: Politics, Persuasion, and Issue-based Advocacy,” says these are the topics on which famous people may actually have the least sway.

“The kind of issues where they aren’t really influential are the traditional wedge issues," Harvey says. “Celebrities aren’t really going to change anyone’s minds on abortion or guns. For most people, this has become part of what has become a wedge issue.”

Well-known voices then become something else — amplification devices, opinions used more as fodder for existing arguments than as actual agents of influence.

“People that have certain beliefs that they want to promulgate forward ... they’re going to grab on to these athletes as spokespersons for their cause,” Lebowitz says.

That doesn't necessarily mean that famous voices have no actual effect, though. Harvey says a celebrity's personal connection to an issue can matter — and can command attention.

For example: “Today” show host Katie Couric got a colonoscopy on the air in 2000 after her husband died from colon cancer, and the number of such procedures saw a major spike in the months that followed. And Elton John talking to LGBTQ communities — especially about LGBTQ issues — might find himself heard more than someone else.

By the same logic, devoted fans of a team like the Green Bay Packers might be more likely to listen to vaccination opinions from a storied local player like Rodgers. And the opinions of Black athletes might grab more traction in African-American communities, especially when tapping into a history of medical mistreatment.

“They can feel a sort of lack of trust, with memories of the Tuskegee experiments and forced sterilization for women of color,” Hayashi says. “Those identities are not stripped away in these situations.”

The stance of Djokovic might similarly resonate in the Serbian athlete's home country, given its role in European conflicts of the 20th century.

“For Djokovic, the Serbian community with their role in Europe and how they’ve been presented as bad guys, he can become a symbol for some certainly by asserting a sort of national pride with the way he’s standing up,” Hayashi says.

While sports have always been indivisible from politics and public conflicts, there has been a major ground shift in the years since Michael Jordan made public neutrality on all non-sports issues an essential part of his brand. Today there is almost an expectation of advocacy, especially with the precedent set by Colin Kaepernick's protests and the embrace by many athletes of the Black Lives Matter cause.

“We expect an awful lot of them," Leibowitz says. "We ask them to fix hate and hurt. And now we expect a groundswell from them on public health.”

These expectations were heightened through the cultural crucible of the Trump era, which Harvey says were “defined by celebrity advocacy” under a president who himself — as businessman, reality-TV star and general high-profile person — helped build the notion of celebrity voice into an American bully pulpit in the 1980s, 1990s and 2000s.

“I think the moral of the story that celebrities are learning, which is where you kind of have to take a side,” Harvey says. "Nowadays, if you don’t take a side, people don’t think you don’t have a spine.”

And while athletes don't necessarily feel the pressure they once might have to constantly think of the children they're influencing, the expectation that they remain role models for the young remains embedded in the culture — as it has since the years of the earliest sports mega-celebrities like Babe Ruth more than a century ago.

“There’s a lot of things we see in society, sports being the crucible for shaping youth and certain ideas that we value, sacrifice and effort and goal orientation, learning how to work hard and set goals, to be this shaper of youth and morality,” Hayashi says. "I find this kind of perversely laughable that we turn to these kinds of figures for this. You can’t get that from being a disciplined violin player or an artist or a writer?”