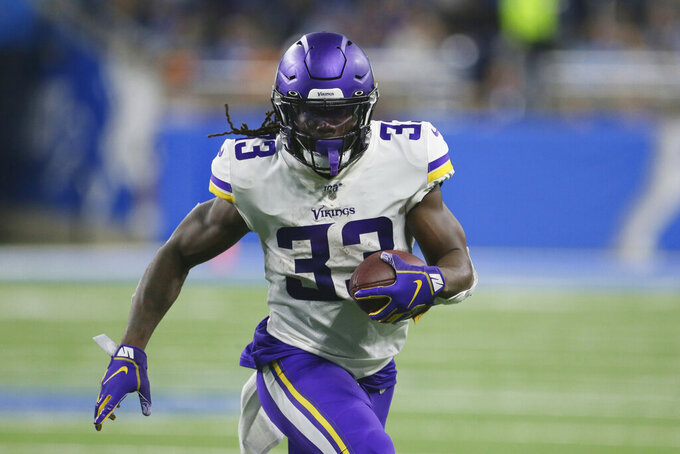 FILE - In this Oct. 20, 2019, file photo, Minnesota Vikings running back Dalvin Cook rushes during the second half of an NFL football game against the Detroit Lions, in Detroit. The Vikings have centered their offense around running back Dalvin Cook and praised him at every turn, but now the bill has come due. Cook is holding out of team activities until he has a new contract.(AP Photo/Duane Burleson, File)

MINNEAPOLIS (AP) — Dalvin Cook logged off last week from virtual team activities with the Minnesota Vikings, no longer willing to participate until he has secured a new contract.

Cook's situation is the latest standoff of sorts between an NFL team and a star running back, with the possibility of several more in the coming year in a league that has steadily driven down the financial value of the position.

The Vikings, though, have made no secret of their desire to make Cook the centerpiece of their offense. It's difficult to envision them not eventually striking a deal with a player they've frequently praised for his work in the backfield, in the locker room and in the community. Cook was the only player pictured on a promotional graphic the team created earlier this spring for the release of the 2020 schedule.

“I consider Dalvin as one of those core group of players that we definitely want to try to keep,” general manager Rick Spielman said earlier this offseason.

A person with direct knowledge of Cook’s decision confirmed to The Associated Press that the Pro Bowl pick will not take part in the remainder of the offseason program or report to training camp without a new contract. The person spoke on condition of anonymity because of the confidential nature of the negotiations.

If Cook were to skip part or all of camp, which remains a tentative event due to the uncertainty of the COVID-19 pandemic, the Vikings wouldn't worry much about the lost repetitions.

“Dalvin could teach class. He’s that bright and that smart of a football player,” offensive coordinator Gary Kubiak said this week. “It’s part of the business, and guys like him, professionals like him, take care of themselves.”

Cook had a breakout season in 2019, with 1,135 yards and 13 touchdowns rushing plus 519 yards receiving in 14 games. He had 303 total touches, a per-game average (21.6) that ranked fourth in the NFL. Cook has missed 21 games including playoffs to injuries over three years in the league, however. The 2017 second-round draft pick tore his ACL as a rookie, had a hamstring strain in 2018, and dealt with shoulder trouble last season.

Carolina's Christian McCaffrey set the position bar high two months ago with his four-year, $64 million extension, after the All-Pro selection became just the third player in NFL history to reach 1,000 yards rushing and receiving in one season.

“I’d put McCaffrey in his own camp. He’s an anomaly, and he’s been paid as such now,” said Mike Ginnitti, the managing editor of Spotrac, the website he founded to evaluate pro sports contracts.

The six-year, $90 million deal Dallas reached with Ezekiel Elliott, the fourth overall pick in the 2016 draft, prior to last season would also be hard for the Vikings to mimic considering the amount of salary cap space they've devoted to quarterback Kirk Cousins and several standouts on defense.

The three-year, $39 million contract Arizona gave David Johnson, who's now with Houston, might be the most realistic model. Spotrac pegged Cook for a deal with an annual average value of around $12.5 million, perhaps $25 million guaranteed over the next two seasons.

While Cook could always choose to preserve his health and sit out an entire year like Le'Veon Bell did with Pittsburgh in 2018, failing to report for the first day of training camp would hurt Cook, The new collective bargaining agreement keeps such a player from receiving an accrued season toward unrestricted free agency. He would be a restricted free agent in that scenario without a new deal, severely limiting his market.

There's the franchise tag, too, that the Vikings could opt for, as Kenyon Drake (Arizona) and Derrick Henry (Tennessee) recently received. The Vikings saw promise from Alexander Mattison and Mike Boone in relief of Cook last year, too, giving them cap-friendly options in the worst-case scenario.

Melvin Gordon essentially lost his staredown last year with the Los Angeles Chargers, who wound up giving his replacement Austin Ekeler, who was undrafted in 2017, a four-year, $24.5 million deal. Gordon took a two-year, $8 million contract with Denver.

The rest of the NFL will be closely watching what transpires with Cook and the Vikings. Not only are Henry and Drake still seeking longer guarantees, but so are these 2017 draftees beyond their rookie deals: Leonard Fournette (Jacksonville), Joe Mixon (Cincinnati), Alvin Kamara (New Orleans), James Conner (Pittsburgh), Marlon Mack (Indianapolis), Aaron Jones (Green Bay) and Chris Carson (Seattle).

In a quarterback-driven league with the high injury rates of running backs, some of those players in that group are likely to be disappointed.

“They'd like more long-term stability, but I do think that's where this position is going, because they are impactful players for a few years even after their rookie contract, and then they do fall off a cliff," Ginnitti said. “That's just what the analytics prove now. So really what we're getting at is a couple of franchise tags smashed together. That's really what I think we're going to see with a couple of these contracts, in terms of two-year guarantees at a really high clip.”