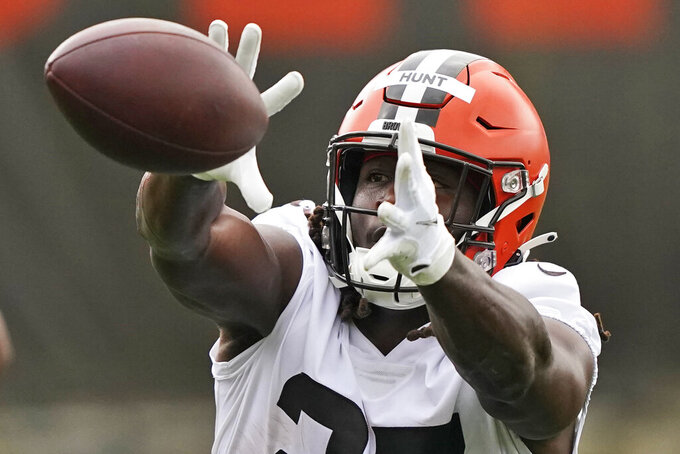 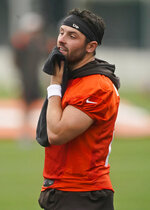 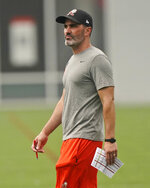 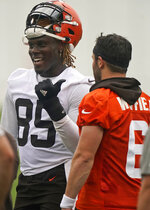 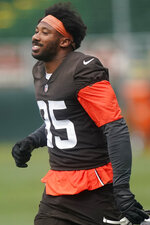 “Honestly, all he needs to do is work, perform and he’s going to be fine," Browns general manager Andrew Berry said when asked what the next step is for Cleveland's quarterback.

It might be a little more complicated than that.

Berry was peppered with questions about Mayfield's future with the club Friday. He's eligible for a contract extension this summer, but to this point the Browns — and Mayfield's agents — don't seem to be in any rush to get one done.

It could still happen this summer, and Berry made sure to stay clear of any comments that provided a specific time frame.

As usual, Berry did have several positive things to say about Mayfield, who bounced back from a rough 2019 and led the Browns to their first playoff appearance since the 2002 last season.

“Good player, even better person,” Berry said before practice. "Can’t have enough people in our locker room that embody those two characteristics.”

The Browns spent nearly 20 years looking for a franchise QB and appear to have found one in Mayfield, the No. 1 overall draft pick in 2018. Mayfield has made it known he wants to stay in Cleveland, and he's under contract for two more seasons after the Browns exercised his fifth-year option in April.

And while there seems to be mutual admiration between player and team, the longer Mayfield goes without signing an extension, the more the situation has a chance to become a major distraction.

It's expected that the sides will begin talking contract soon, and Berry said he's not averse to negotiations carrying over into the season.

“We’re not that dogmatic in any particular philosophy in that regard,” he said.

In April, Browns owner Jimmy Haslam indicated the team would like to lock up Mayfield to a long-term deal, but the ball is in Berry's court.

It's possible the young GM wants to see Mayfield have another strong season before investing in him going forward. Berry was asked if he needs to see more games before making a decision on the 26-year-old.

"We feel really good with Baker’s progress,” Berry said. “He’s made a ton of growth both on and off the field. We’re looking forward to him having another fantastic season.”

There's two other variables that could affect whether Mayfield gets an extension soon — Lamar Jackson and Josh Allen.

Baltimore and Buffalo's star quarterbacks also are eligible for extensions as they were in Mayfield's draft class, The Browns could be waiting for one of them to set the bar, but it's also possible the Ravens and Bills are keeping an eye on Cleveland's situation.

But Mayfield isn't the only Browns player who could soon cash in as star running back Nick Chubb, cornerback Denzel Ward and left guard Wyatt Teller are all also eligible for extensions.

Berry, who keeps things close to the vest, acknowledged that contract situations can be tricky and potentially disruptive.

“We certainly try to do our best to communicate with all of our guys, whether it’s a contract situation or not, but we certainly understand that sensitivity,” he said.

Berry opened his news conference by announcing the hiring of former Lions general manager Bob Quinn as a senior consultant. Berry said he appreciates Quinn's experience and will lean on him for advice on matters.

So what did Quinn tell him about Mayfield's situation?

“I should have known that one was coming," Berry said, laughing.

NOTES: Fans were allowed to attend practice for the first time since 2019. They barked like they do in the Dawg Pound at FirstEnergy Stadium and even got All-Pro defensive end Myles Garrett to stop and wave several times before he throw his gloves into the stands. ... Berry said roughly 90% of the roster is either fully vaccinated or have gotten one shot. ... WR Odell Beckham Jr. was limited as he works his way back from knee surgery. ... WR Derrick Willies retired after undergoing off-season knee surgery.

By The Associated Press 2 minutes ago
By W.g. Ramirez 6 hrs ago
By Tim Reynolds 8 hrs ago
13 hrs ago
By Greg Beacham 13 hrs ago