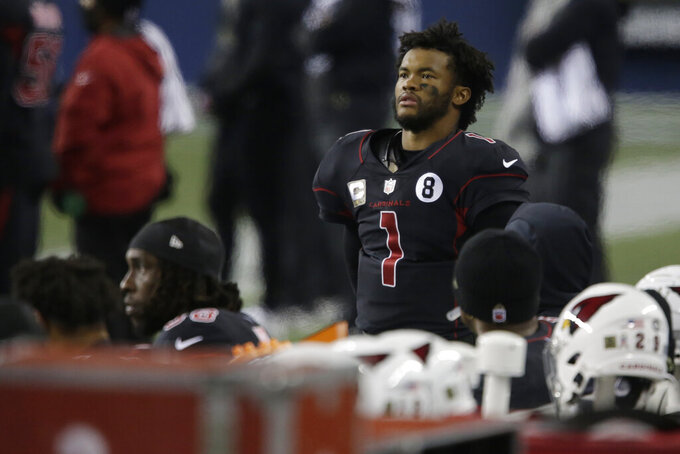 Arizona Cardinals quarterback Kyler Murray (1) watches from the sideline during the second half of an NFL football game against the Seattle Seahawks, Thursday, Nov. 19, 2020, in Seattle. (AP Photo/Lindsey Wasson)

Arizona's stay at the top of the NFC West lasted just five days after Thursday's loss. The Cardinals (6-4) are now a game behind the Seahawks for the division lead and trail the Los Angeles Rams by a half-game.

They're still right in the middle of the playoff race in the NFC if they can play well during the final six weeks. Murray's health is obviously of paramount importance if the Cardinals want to be a factor. He fell on the shoulder early in the game against Seattle and TV shots showed the second-year quarterback grimacing on the sideline.

“I'm not sure about the extent of it,” Arizona coach Kliff Kingsbury said Friday. “But like we talked about last night he landed on it on that play, but that's about all I know.”

Murray still finished with a solid game, completing 29 of 42 passes for 269 yards and two touchdowns. He ran for a season-low 15 yards. He'll have a few extra days to rest before the Cardinals travel to face the New England Patriots on Nov. 29.

“I thought he competed well throughout the game,” Kingsbury said. “I'll have to sit down, when we watch the film together, and talk through that. But I thought he played tough, played physical. You could tell he was hurting a bit, but he pushed through it and gave us a chance to win at the end, which says a lot about his character and mental toughness.”

Other than Murray, the biggest problem for the Cardinals against the Seahawks was an avalanche of penalties. The Cardinals earned 10 yellow flags for 115 yards.

Cornerback Dre Kirkpatrick's taunting penalty in the third quarter was particularly costly. It gave the Seahawks an automatic first down instead of fourth-and-2 and Seattle ended up scoring a touchdown on the drive.

“It's something we have to be better at, there's no question,” Kingsbury said. “Some are effort, there's a hold or a face mask when someone's trying to make a tackle, things like that come up during a game. But pre-snap penalties, personal foul penalties, you can't have those and expect to win week in and week out, and we have way too many of that variety.”

Even with a sore shoulder, Murray and the Cardinals had a nice game through the air on a chilly night. One reason Arizona is so effective passing is it has more options than star receiver DeAndre Hopkins. Veteran Larry Fitzgerald caught a team-high eight passes for 62 yards. Tight end Dan Arnold had a nice grab on a 4-yard TD pass. Running back Chase Edmonds continues to be effective out of the backfield with four catches for 36 yards and a TD.

For the first time in a while, the running game looked very ordinary. The Cardinals came into the game with the NFL's No. 1 rushing offense but managed just 57 yards on the ground. The Seahawks had a good plan to keep Murray from making big plays and you can bet that other teams will be studying the film to copy their approach.

Rookie linebacker Isaiah Simmons started the season as a role player, but the No. 8 overall pick is quickly emerging as one of the team's most important defensive players. He had a team-high 10 tackles vs. the Seahawks and Kingsbury said his role will continue to evolve over the season's final six weeks.

Kirkpatrick has been a solid starter since being signed during preseason camp but his taunting penalty against the Seahawks was a backbreaker. The veteran's verbal spat with receiver D.K. Metcalf extended a Seattle drive that led to a TD and was a turning point in the game.

Kingsbury said starting safety Jalen Thompson aggravated an ankle injury that kept him out of several games earlier this season.

4 — The Cardinals' last four games have all been decided by a touchdown or less. They have a 2-2 record over that span.

The Cardinals need to make sure Murray's healthy and clean up the penalty issues before they travel to face the Patriots on Nov. 29.