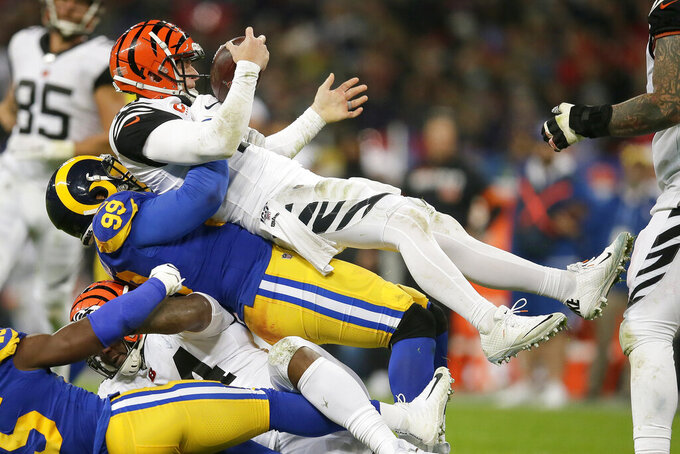 CINCINNATI (AP) — The Bengals returned from their bye week with their overriding questions answered: How far would they fall? All the way to the bottom, it turns out.

The Dolphins' win over the Jets on Sunday left Cincinnati (0-8) the only winless team in the NFL. The Bengals are two losses away from matching the longest losing streak in franchise history. They've switched to rookie quarterback Ryan Finley as they officially begin looking ahead to next year.

The next two months will be allocated to figuring out what they need to do to give coach Zac Taylor a fighting chance in his second season as head coach. For now, there's not much that can be done about a porous offensive line and a defense that's worst in the league at stopping the run.

One intriguing development ahead: A.J. Green returning from ankle surgery. Green has missed the first eight games after hurting his left ankle in training camp. He practiced on a limited basis last week and could return for a game Sunday against the Ravens (6-2) at Paul Brown Stadium.

Green put contract discussions on hold while he recuperated. The Bengals' best player can become an unrestricted free agent after the season and would like to stay in Cincinnati if the team is willing to offer a suitable deal. He said last week he'll be upset if it chooses instead to keep him for one more season on a franchise tag.

In the short term, there's the question of how long it will be until Taylor gets to celebrate that first win. After hosting the AFC North-leading Ravens, the Bengals play at Oakland, host the Steelers, and then get the Jets at Paul Brown Stadium on Dec. 1.

That team record of 10 straight losses in one season is in play.

Well, they're now in line for the first overall pick in the draft. The last time they chose No. 1 was 2003 — Marvin Lewis' first season as head coach — when they took Carson Palmer. Palmer led the Bengals through 2010 before saying he'd retire rather than continuing to play for Cincinnati, which he felt lacked a commitment to winning. He was dealt to the Raiders.

The run defense. Lamar Jackson ran for 152 yards during the Ravens' 23-17 win over the Bengals in Baltimore on Oct. 13. The Bengals had several players focused on the dual-threat quarterback during that game but still gave up big plays.

Finley. For now. Wait and see how he fares against the Ravens' blitzing defense before making any assessments.

Dalton. He's got one year left on his deal. The Bengals declined to try to trade him before the deadline last week, leaving him stuck for half a season as Finley's backup. It's not how the second-round pick in 2011 imagined his career playing out in Cincinnati.

Green's return would give Finley a better chance. The offense also is missing receiver John Ross, the Bengals' fastest player, allowing defenses to focus on stopping the run without having to worry too much about a deep threat. Green would at least make defenses pay attention.

Figure a way to give Finley a chance. Opposing defenses were able to take away Cincinnati's running game and pressure Dalton, who was among the league leaders in getting sacked. That's a daunting scenario for the rookie quarterback's debut.