Eagles' defense adjusts to Giants' changes ahead of matchup 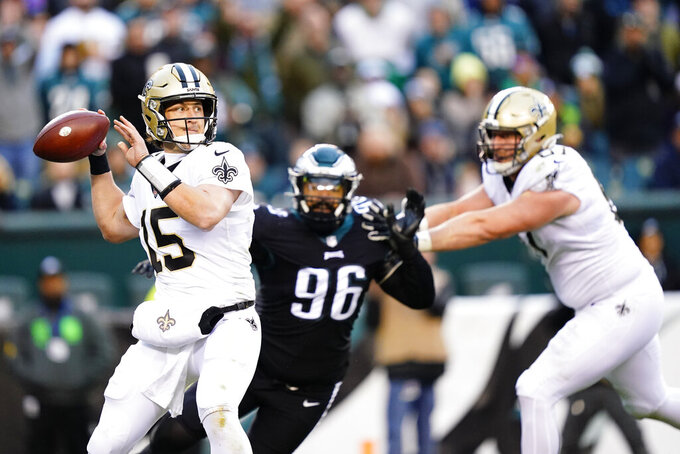 New Orleans Saints' Trevor Siemian passes during the second half of an NFL football game against the Philadelphia Eagles, Sunday, Nov. 21, 2021, in Philadelphia. (AP Photo/Matt Rourke)

An improving Eagles defensive corps seems confident it can adjust.

“It caught everyone off guard, kind of an unexpected change,” Eagles safety Rodney McLeod said Wednesday. “Within any game, teams are going to run different things that they might not necessarily show on film, or things that have worked against you (for other opponents). We have to be able to adjust and adapt.”

Senior offensive assistant Freddie Kitchens is expected to call plays for the Giants (3-7) as they welcome the Eagles, who have won 12 of the last 14 meetings between the NFC East rivals.

The Eagles (5-6) have won three of four to put themselves in the playoff mix.

The Giants are working on a short week following Monday night’s 30-10 loss at Tampa Bay, so it isn’t clear how much Kitchens will be able to re-engineer an attack averaging 17.67 points per game over its last six outings.

Eagles coach Nick Sirianni said his team will rely on the situational rules that defensive coordinator Jonathan Gannon has established. He said the coaches have gone back and looked at film from Kitchens’ 2019 stint as Cleveland Browns head coach to get a feel for tendencies.

“When stuff like that happens. ... you have to play your rules,” Sirianni said. “Every defense, every offense has rules written into it if you get different looks. So, that’s where our preparation in the offseason, our preparation throughout each week, is going to really pay dividends.”

Linebacker Alex Singleton, expected to assume a larger role with Davion Taylor on injured reserve following knee surgery this week, said Eagles coaches know Kitchens and have coached against him. Singleton also said that the Giants “are going to be themselves. Daniel Jones has pretty much run the same type of offense his entire career. We’re pretty much banking that they’re not going to change it too much this week.”

Giants coach Joe Judge told Philadelphia-area reporters on a conference call Wednesday that he expects staff-wide input on this week’s game plan. Judge said Kitchens “sees the game from a big-picture standpoint . ... the lens he looks with is a lens with players. I think that’s important when we talk about distributing the ball around the team and giving opportunities for guys to make plays.”

Eagles defensive tackle Fletcher Cox said the team can’t get caught up in what the Giants might do differently.

“The biggest thing for us is just making it about us,” Cox said. “Make sure that whatever (Gannon) calls, we’re playing it and everybody’s doing their job. ... Will they have some wrinkles? I’m sure they will.”

A month ago, Sirianni and Gannon were under nearly as much fire in Philadelphia as Judge and Garrett have been recently in New York. The Eagles were 2-5 after a 33-22 Oct. 24 loss at Las Vegas that wasn’t as close as the final score. Gannon’s defense had allowed 162 points in a five-game span, an average of 32.4 points per game.

Players were grumbling about not being used correctly.

In going 3-1 since that debacle, the Eagles have allowed 18.8 points per game.

Players discussed the team’s performance on the flight home from Las Vegas, talking about the need to stay united, McLeod said. Gannon has blitzed more, and has changed up coverages and fronts more often in the ensuing games.

The Eagles also have faced a string of less-accomplished quarterbacks, comparatively, after encountering Dak Prescott, Patrick Mahomes, Tom Brady and Derek Carr in a five-week span.

NOTES: Sirianni said he holds out hope that Taylor will play again this season . ... Sirianni disclosed that he took RB Miles Sanders out of Sunday’s victory over the Saints after Sanders ran out of bounds, stopping the clock late, even though they’d discussed that mistake after Sanders made it twice against Carolina. “Mentally, I’ve just got to stay locked in and know what I’ve got to do,” said Sanders, who finished with 94 yards on 16 carries. Sirianni noted that Sanders could have logged 100 yards (for the first time this season) had he not been taken out. “Repeat offenders of things, we usually get mad about. He knows,” Sirianni said.