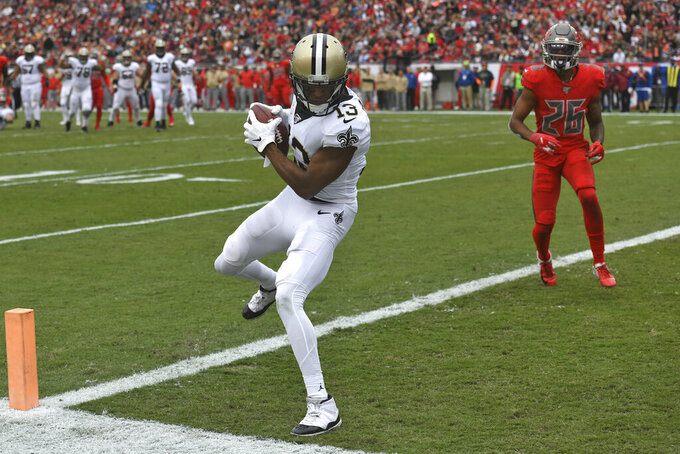 The 6-foot-3, 212-pound Thomas is often seen striding somewhere with purpose, be it for muscle maintenance in the training room or to study opposing defenses in meeting rooms.

The way he celebrates clutch catches with bulging biceps flexed on each side of his head indicates how much time he spends in the weight room, building the strength that makes it difficult for defenders to establish inside position on New Orleans’ No. 1 receiver, or get between him and an arriving pass.

His 321 catches for 3,787 yards and 23 touchdowns in his first three seasons out of Ohio State earned him a five-year extension worth nearly $100 million. Thomas pledged to “ earn every penny,” and has since produced what could be one of the greatest seasons by a receiver in NFL history.

“I’m blessed to be in a position to have an opportunity to earn a contract like that, so I just want to take full advantage of it and give my best effort and add the most value I can,” Thomas said. “How can I build and how can I get better? And how can I do better than I did the week before? I’m always trying to play a perfect game. I haven’t played one yet.”

He doesn’t seem far off.

His 104 receptions are the most ever through the first 11 games of a season, putting him on pace to eclipse Marvin Harrison’s single-season record of 143 receptions in 2002. That’s also 23 catches ahead of Houston’s DeAndre Hopkins, who ranks second.

Thomas has produced while playing with two different quarterbacks this season: Drew Brees and backup Teddy Bridgewater, who started five games when Brees was sidelined by a thumb injury.

Thomas even thrived when defenses knew he’d be a focal point of the Saints’ offense because of sporadic injuries to other key offensive players — from dynamic running back Alvin Kamara to tight end Jared Cook.

Thomas said when he knew he was going to be the focal point of opposing defenses, his approach was to “accept the challenge and don’t think it’s the end of the world.”

“I don’t want to make any excuses about what (scheme) they’re playing or they did this or they did that,” Thomas continued. “Whatever my coach is asking me to do, if they need me to make a play, no matter how many people are on me, I’m going to make the play.”

Of the 408 passes the Saints have attempted this season, 124, or 30 percent, have been intended for Thomas, and he’s caught 84 percent of those.

As far as drawing coverage from opponents’ top defensive backs, Thomas states flatly, “I’m not really worried about the names on the jerseys or who’s following me. If I look up and you’re in front of me, I’m about to beat you. That’s it.”

The numbers back him up. He’s made 10 receptions and 100 yards in a game look routine.

In last Sunday’s 34-31 victory over Carolina, he had 10 catches for 101 yards and a touchdown, making him the first player in Saints history with five straight 100-yard receiving games. The Panthers couldn’t contain him during the Saints’ game-winning drive inside the final two minutes, when Thomas caught passes of 14 yards on second-and-16 and 24 yards on third-and-6.

Brees, whose work ethic is widely viewed as second to none in New Orleans, nods and wears a knowing smile when asked whether Thomas exhibits an off-the-charts drive.

“He wants it,” Brees states emphatically.

The 40-year-old record-setting QB said that seeing Thomas play better than ever right after becoming one of the highest-paid players at his position, second only to Atlanta’s Julio Jones, “Says a lot about the person, a lot about the competitor.”

While Thomas is not on pace to break Calvin Johnson’s 2012 record of 1,964 yards in a season, he leads the NFL this season with 1,242 yards, 171 yards ahead of Tampa Bay’s Chris Godwin, who is second.

On Nov. 10, when the Atlanta Falcons sacked Brees six times and held the Saints without a touchdown in a 26-9 victory in New Orleans, they still had trouble containing Thomas, who had 13 catches for 152 yards.

Atlanta safety Ricardo Allen said a main challenge of defending Thomas is “how big he is and his catch radius,” adding that Thomas is “going to go out there and fight. He's a competitor.”

When Thomas came into the NFL, he spoke of doing hand yoga to help him secure catches. Brees has always raved about Thomas’ ability to attack balls with his hands while not breaking stride.

Brees said Thomas was still raw as a rookie and had limited routes he could run, but now he can run any route in the playbook in a highly refined, nuanced and precise way.

“Listen. He’s a special guy,” Brees said. “Tell Mike the route. He’ll assess the coverage. He’ll know how he needs to run it based upon who he’s running it against as well, because he studies the guys.

“He’s going to look you dead in the eye and say, ‘I’m going to get open.’ And you believe him. You trust him,” Brees continued. “So you anticipate it. You throw it. And most of the time, he’s right.”