Nagy searches for answers with Bears' season slipping away 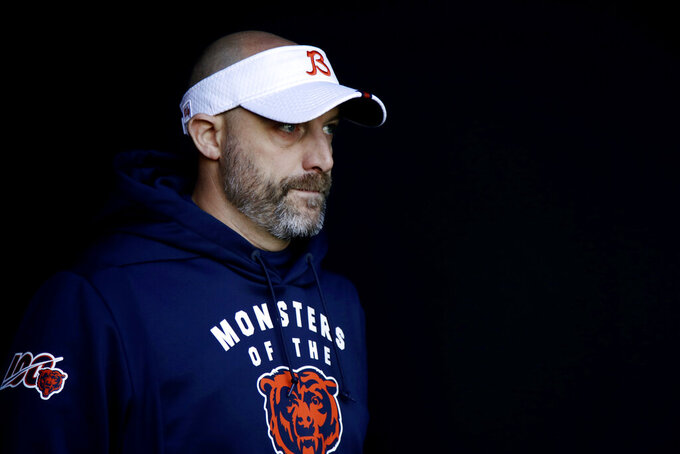 LAKE FOREST, Ill. (AP) — Coach Matt Nagy insisted there is a silver lining somewhere for the Chicago Bears. It's just hard to find at the moment.

The defending NFC North champions are reeling after four straight losses and eyeing their fifth last-place finish in six years. They're being tested in a way they never were last season. And their coach is trying to figure it all out.

"You try to find every answer that you can and you stay as positive as you can," Nagy said Wednesday. "And I think that's the beauty of all of this. There's a silver lining. There really is. And people can say that's cliche. And they can say it sounds good. But I fully in my heart of hearts believe that. And I don't know when it's going to happen. It's somewhere. It's somewhere. And when you finally knock it down and you figure it out and you get it, then you're going to say OK. I see. Now. I couldn't tell."

The Bears (3-5) hope to start turning things around when they host the Detroit Lions (3-4-1) on Sunday. But for now, little is going the way Nagy envisioned in his second season.

An offense that showed promise last season ranks among the worst in the NFL. Quarterback Mitchell Trubisky is struggling. The line is getting pushed around. The tight ends have contributed little. The receivers overall aren't making enough plays, though Allen Robinson is performing well. And a defense that ranked among the NFL's best a year ago has shown some vulnerability.

Nagy has also come under the microscope after igniting the fan base last season with his creative calls on offense and fun demeanor. But after leading Chicago to a 12-4 record and its first playoff appearance since 2010 on his way to winning the Coach of the Year vote, things are different now.

"We put ourselves in a great opportunity to where now the expectations are meteoric," Nagy said. "Now they're just extremely high for a team that's coming from where we were coming from. And that's great. We're not asking for anything different. We want that."

It would help if the Bears got off to better starts. But they've punted on their first possession in seven of eight games. The only time they didn't was in their victory over Minnesota in Week 4, when they went 75 yards for a touchdown.

The lack of rhythm has consistently placed them in tough situations and limited the plays Nagy can call. It's also put a burden on the defense.

"We've been a good offense and we've been to a point where we can score points and have been a successful offense," Trubisky said. "I think it's more frustration because we know what we're capable of."

Trubisky said he's trying to get some of the TVs in Halas Hall turned off because he's tired of watching outsiders criticize the team.

The Bears never dropped more than two games in a row last season. And that happened just one time.

Some of Nagy's decisions have come into question, particularly when he opted to have the Bears take a knee with about 40 seconds remaining rather than try to get closer to the end zone against the Los Angeles Chargers two weeks ago. Eddy Pineiro missed a 41-yard field goal as time expired, and the Bears lost 17-16.

"Adversity is going to strike," Nagy said. "It struck. So ... how are we going to react? Because at the end of this thing, it's going to reveal a lot about a lot of people. I think that's what I am going to take away from this. You can't worry about Week 15 or 16 right now. You have to worry about Detroit Lions. That's it. So yes, it's totally different. But there's not a coach in the NFL who would tell you that one year is the exact same as the next year."

Receiver Taylor Gabriel insisted Nagy's demeanor "is the same" as last season. But he acknowledged a "sense of urgency."

"To lose three or four games like that is heartbreaking to this team and to this organization when you think about the expectations that were put on this team," Gabriel said.