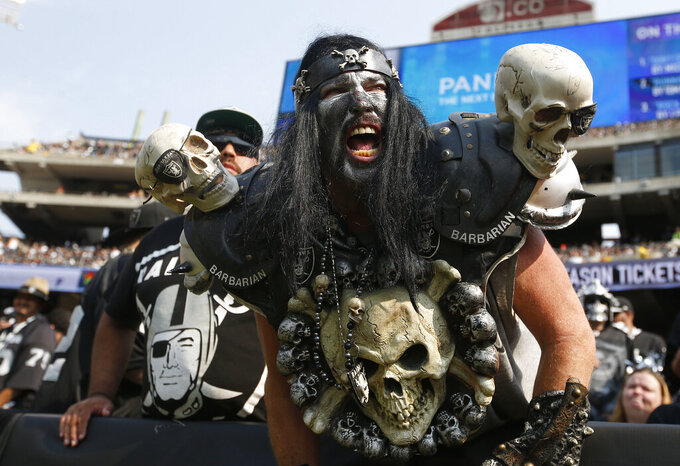 FILE - In this Sept. 13, 2015, file photo, Oakland Raiders fans watch during the second half of an NFL football game between the Oakland Raiders and the Cincinnati Bengals in Oakland, Calif. The south end zone sections, called The Black Hole, of Oakland-Alameda County Coliseum are known to have some of the rowdiest fans in American sports, face painters who dress up in evil costumes, often with spike-covered shoulder pads. The slow, agonizing demise of the Oakland Raiders will continue for at least one more season. There will be one more "final" home game at the Oakland Coliseum, Dec. 15 against the Jacksonville Jaguars. There have been possible "final" home games for a few years now because the Raiders have essentially had one foot out the door since 2015, when they joined with the AFC West rival Chargers in a failed attempt to build a stadium in the Los Angeles suburb of Carson. (AP Photo/Tony Avelar, File)