NFL to use advisory committee to avoid conflicts of interest 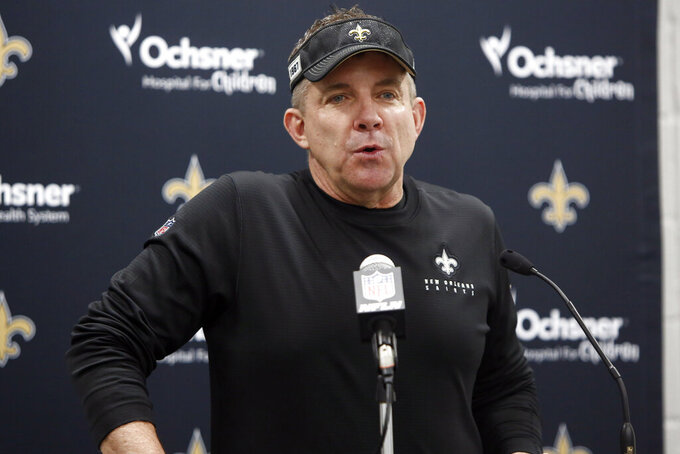 New Orleans Saints head coach Sean Payton speaks to the members of the media during the second half of an NFL football game against the Carolina Panthers in Charlotte, N.C., Sunday, Dec. 29, 2019. The NFL will consult an advisory committee made up of former coaches, general managers and players on such issues as postponing, moving or even canceling games this season due to the coronavirus pandemic. (AP Photo/Brian Blanco)

The NFL will consult an advisory committee made up of former coaches, general managers and players on such issues as postponing, moving or even canceling games this season due to the coronavirus pandemic.

Troy Vincent, the league's football operations chief, said Wednesday that the advisers, who will report to Commissioner Roger Goodell, will help avoid any “inequities” in those decisions. Vincent did not identify any members of the panel, saying he was awaiting their approval to do so.

Vincent acknowledged that using the competition committee for such decisions could create conflicts of interest.

“The inequities — we hope it doesn’t occur, but just based on what we have seen, we must have the flexibility,” Vincent said, noting that teams might not play the same number of games and that would affect playoff seeding as examples of what the advisers might address.

Vincent also said the league will consider playoff games in a bubble environment, noting that “all options are on the table.” Saints coach Sean Payton recently brought up that possibility during a competition committee meeting.

“The concept itself where players could do it if they choose to do it, to form some kind of bubble, that secure environment, the concept was discussed,” Vincent added.

Dr. Allen Sills, the league's chief medical officer, noted that setting firm schedules for anything during the pandemic is foolhardy.

“We’re going to have to be flexible and adaptable,” Sills said. “I think that’s something we’ll continue to track and monitor. If this taught us anything, projecting three/four weeks down the road is a hazardous business.”

The league sent game-day and travel protocols to the 32 teams this week. The extensive in-stadium specifics include rules for the field, sidelines, locker rooms, tunnels, entrances and training rooms.

Ownership is allowed on the field, but not in the bench area.

As Sills noted, the sidelines will not look like anything in the past, with people spread out for social distancing, PPE required, and non-essential personnel barred.

“It’s safe to say the field will look very different this year, there will be markedly fewer people in and around the field, certainly very restricted access,” Sills said.

Also required on game day will be pregame medical screening; only individually pre-packaged food for players, club and game-day personnel and game officials; frequent cleaning and sanitizing procedures; coordinated and staggered arrival and departures for teams; and physical distancing measures.

Players not dressed for the game are advised to remain in the locker room or “some other designated stadium location separated from other non-team personnel during pregame and throughout the game.”

Travel protocols call for a maximum of 110 people in a team's traveling party, with face masks required during travel. All travel partners such as airlines, hotels and buses, must meet NFL and players' union standards for COVID-19 protection.

Team members are not permitted to leave hotels to eat or otherwise use any restaurants open to the public. No takeout meals will be allowed. Sills noted the need for hotels to ensure they have proper air flow and filtration as well. Teams are instructed to ask for private entrances and check-in facilities, and when possible, to be provided rooms on lower floors to avoid the need for elevator use.

“We know testing alone does not make it safe,” he said. “We must follow protocols and wear PPE. ... There is a delicate balance to have there.”

Sills announced that any NFL personnel who had a previous confirmed positive COVID-19 test is being removed from the testing pool for 90 days, in accordance with CDC data. The CDC has said anyone who has had and recovered from the coronavirus still could have low levels of virus in the body for up to 90 days after being diagnosed.