Packers could be without LB Za'Darius Smith for opener 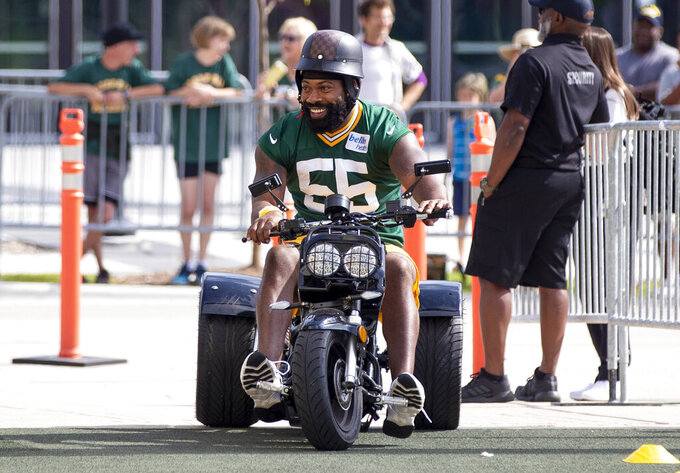 Packers coach Matt LaFleur said Sunday he was not sure the outside linebacker will be ready to play in the Sept. 12 game.

Smith spent the first 12 practices of training camp on the non-football injury list with a back issue. He returned to practice Monday but missed the joint practices against the New York Jets on Wednesday and Thursday, and didn’t play in a 23-14 preseason loss to the Jets on Saturday.

“I’m not quite sure when we’ll get ‘Z’ back,” LaFleur said. “He’s injured right now. I know he wants to be out there, but we’re going to be smart with him. He’s obviously a big-time player for us. It definitely is a concern.”

With the Packers facing major salary-cap issues, Smith’s contract was one of several renegotiated by general manager Brian Gutekunst during the offseason.

Smith’s revamped deal created almost $7.4 million of cap space at the expense of increasing his cap charge in 2022 – his final season under contract – to a whopping $28.1 million. That’s an untenable number for the Packers, who are projected to be more than $50 million over next year’s cap.

Smith has been superb during his two seasons in Green Bay with 26 sacks, 29 tackles for loss and five forced fumbles.

His absence would be a major blow. While Za’Darius Smith, Preston Smith and Rashan Gary form a superb trio, there’s little depth behind them. The two Smiths aren’t related.

Jonathan Garvin, a 2020 seventh-round pick, rounds out the group along with waiver-wire pickup Chauncey Rivers and 2020 undrafted free agents Tipa Galeai and Delontae Scott. Combined, those four have zero sacks and five tackles in 10 games.

LaFleur also said that he hopes quarterback Jordan Love will participate in individual drills Monday. Love injured his throwing shoulder in the preseason opener against Houston. He didn’t either practice or play against the Jets.

If all goes well, Love could return to 11-on-11 drills on Tuesday.

Green Bay used Kurt Benkert at quarterback for all but the final series Saturday. He went 18 of 25 for 151 yards with one touchdown and one interception. He guided the Packers’ backups to two touchdowns against the Jets’ starters and key backups on defense.

The Packers haven’t used either quarterback and reigning MVP Aaron Rodgers or most of their starters in their first two preseason games.

Gutekunst believes Benkert has done enough to be the team’s No. 3 quarterback.

“This is a complicated offense and he’s done a nice job picking it up,” Gutekunst said. “I think he’s gotten progressively better and had a really good first half last night.”

The Packers will close the preseason Saturday at the Buffalo Bills. One focal point will be the team’s competition for the starting guard spots.

Against the Jets, Jon Runyan Jr. started at left guard and rookie Royce Newman started at right guard while incumbent starter Lucas Patrick came off the bench. The fourth man in that battle, Ben Braden, started and played the entire game at right tackle.