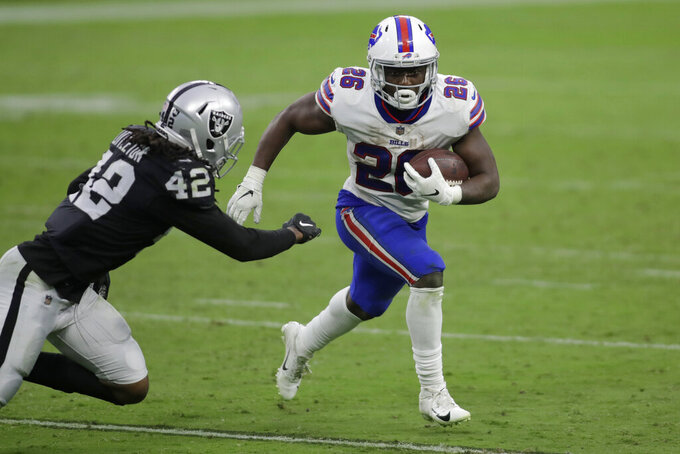 Las Vegas Raiders defensive coordinator Paul Guenther believed he finally had the pieces in place this season to have a successful unit after two years of ranking near the bottom of the NFL.

One quarter of the way through the season, the results haven’t been much different.

The Raiders have allowed 30 points per game so far and went more than five quarters without recording a single defensive stop in losses the past two weeks to New England and Buffalo.

They better get those issues fixed soon with Patrick Mahomes and the high-flying Super Bowl champion Kansas City Chiefs next on the schedule for Las Vegas (2-2).

The Raiders haven’t beaten the Chiefs since Mahomes took over as the full-time starter in 2018. Mahomes has 11 TD passes with only one interception in those games, averaging 298.5 yards passing per game for a 113.6 rating.

Kansas City has averaged 35.8 points in those games as the Raiders have been unable to slow down an offense that is led by Mahomes, the speedy Tyreek Hill and a matchup problem at tight end in Travis Kelce.

“It’s just like any other game, you have to go out and evaluate who is their top receiver, their most explosive guys,” safety Johnathan Abram said. “Then do your best to try to eliminate those guys. Take away what they do best to make them play with their left hand.”

The Raiders have been mostly unable to do that this season. They were gashed by a few big plays in the opener against Carolina, struggled to contain New Orleans’ Alvin Kamara the following week, were chewed up by New England’s running game the next week and then had a few coverage breakdowns last week in a loss to the Bills.

It’s added up to a defense that ranks 28th in the league in allowing 6.24 yards per play and 25th in allowing 2.83 points per drive.

“It’s like at times there’s 11 guys out there rather than 11 guys playing as one,” Abram said.

The Raiders have done some good things at times on defense. They shut down New England’s passing game, controlled Buffalo’s running attack and have cut downs on big plays with just 13 going for at least 20 yards.

But it hasn’t been nearly enough in large part because of a lack of game-changing plays on their end.

No. 4 overall pick in 2019 Clelin Ferrell has failed to develop into a legitimate pass rusher and now the team could be very thin on the interior with defensive tackle Maurice Hurst on the COVID-19 list, backup Daniel Ross on injured reserve and starter Maliek Collins nursing a shoulder injury that has forced him to miss the first two practices this week, leaving his status in doubt.

Guenther has used more blitz calls the past two weeks but the Raiders have gone 21 straight games without a sack from a linebacker or defensive back.

Guenther also tried to change things up by moving from the sideline to the booth to call the game last week.