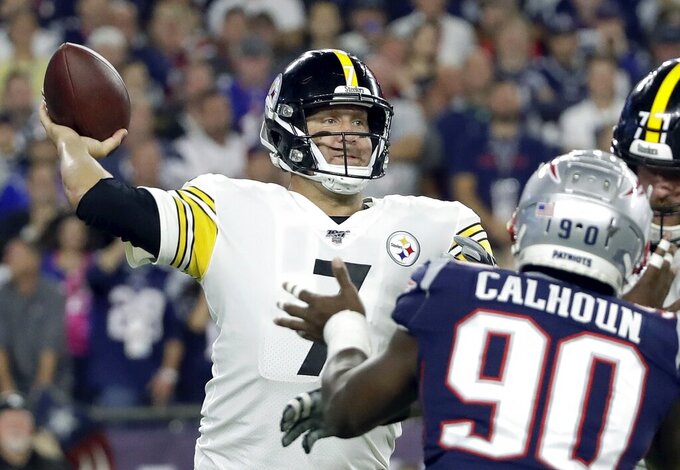 FOXBOROUGH, Mass. (AP) — The post-Antonio Brown era is off to a bad start for the Pittsburgh Steelers.

Pittsburgh struggled to generate offense in a 33-3 loss at New England on Sunday night in its first game since parting with the four-time All-Pro wide receiver. Without Brown to throw to, Ben Roethlisberger finished 27 of 47 for 276 yards and an interception.

This time, unlike last season when he publicly criticized Brown's performance after a Week 12 loss at Denver, the Steelers quarterback shouldered the blame.

Pittsburgh's only points came on Chris Boswell's 19-yard field goal early in the second half. Roethlisberger had 161 passing yards through three quarters before dressing up his stats in the fourth, and the Steelers went just 3 for 12 on third down conversions.

"We've just got to make more plays for No. 7 (Roethlisberger)," new Steelers receiver Donte Moncrief said. "It starts with the whole receiver's room, everybody on offense. We've got to be better."

The disgruntled Brown was traded to Oakland last March and signed a three-year extension with the Raiders. He requested and was granted his release by Oakland on Saturday after a tumultuous offseason and training camp.

A few hours later, Brown was headed to the Patriots, the Steelers' top AFC rival.

"My professional reaction is I really don't have one," Pittsburgh coach Mike Tomlin told NBC's "Sunday Night Football" broadcast before the game. "We've been emotionally detached from him for some time now."

Brown's ex-teammates didn't take the bait on his move to New England, either.

"You know, that (decision's) up to him," said cornerback Mike Hilton, who played with Brown for two seasons. "That has nothing to do with these guys in the locker room."

Brown wasn't the only loss to leave a void in the offense. Two-time All-Pro running back Le'Veon Bell held out all of last season over a contract dispute and signed with the New York Jets during the offseason.

Bell's replacement, third-year back James Conner, had 21 yards on 10 carries and the Steelers managed only 32 rushing yards. Bell rushed for 60 yards and a touchdown for the Jets against Buffalo on Sunday.

"No need to sugarcoat it — man, we weren't ready for prime time," Tomlin said. "All of us, not a good enough plan. Not a good enough execution of that plan. . We won't go undefeated. We're 0-1."