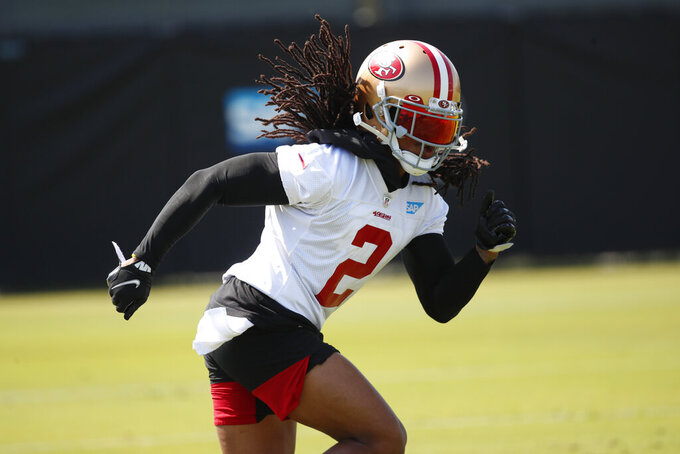 FILE - San Francisco 49ers cornerback Jason Verrett runs on the field during an NFL football training camp in Santa Clara, Calif., on July 31, 2021. Verrett's attempted return from a knee injury was derailed when he tore his Achilles in practice, announced by the team on Thursday, Nov. 10, 2022, in the latest setback in career full of significant injuries. (AP Photo/Josie Lepe, File)

The Niners announced Thursday that Verrett got injured in practice the previous day and will be unable to play in 2022.

“There hasn’t been a quietness over a football field I’ve been around like that in a long time,” Kittle said. “It just kind of sucks your soul out a little bit.”

Verrett was poised to make his season debut this week in a comeback from a torn ACL in his right knee that had sidelined him since Week 1 of the 2021 season.

Verrett has been one of the better cornerbacks in the NFL when healthy, but the problem has been that has been very rare.

Since being drafted in the first round by the Chargers in 2014, Verrett has been able to play more than six games in a season just twice in his career.

“It’s just an unfortunate and devastating injury for him and for us,” defensive coordinator DeMeco Ryans said. “We all feel for JV. The work that he's put in to come back. We’re all saddened by what happened to him. JV is an unbelievable person, an unbelievable leader for us. He’s been tremendous, leading these young guys and giving them everything he has.”

He made the Pro Bowl when he did that in 2015, recording three interceptions and 12 pass deflections for the Chargers. His only other healthy season came for San Francisco in 2020 when he played 13 games.

Even though Verrett managed to play only one game in each of his other two seasons with the 49ers, the team kept bringing him back out of hope he could stay healthy and because of the strong influence he had in the locker room on younger players.

Verrett’s injury history is extensive, from a torn labrum that cost him eight games as a rookie in 2014, back-to-back knee injuries that limited him to five games combined in 2016-17, a torn Achilles tendon on the first day of training camp in 2018, an ankle injury that limited him to one game in 2019 and the season-ending knee injury that sidelined him in the 2021 opener.

“He was a Pro Bowl player and then just had a slew of really, really bad luck,” Kittle said. “It sucks to see that, especially because everyone here loves JV. I know he loves being a part of this team. He’s a big part of this team, whether he’s on the field or off the field.”

The Niners were hoping to get a healthy Verrett for the second half of the season, especially after losing starter Emmanuel Moseley to a season-ending knee injury last month.

Now the 49ers will need to hope they can get strong enough play from either second-year players Deommodore Lenoir or Ambry Thomas, or rookie Samuel Womack as the outside cornerback opposite Charvarius Ward.