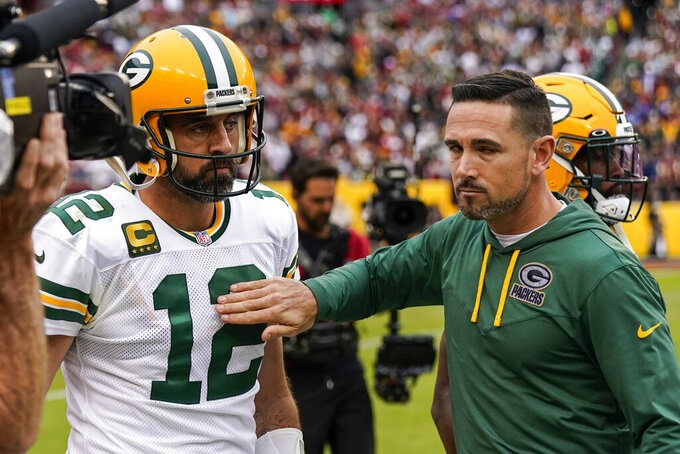 LANDOVER, Md. (AP) — Aaron Rodgers finished the game face down on the turf after sailing a lateral out of bounds on a frantic, failed final play.

This is not exactly what the four-time NFL MVP envisioned when he returned for another season in Green Bay.

Rodgers and the offense sputtered, penalties piled up at the most inopportune moments and the Packers lost their third game in a row, 23-21 to the Washington Commanders on Sunday for their longest skid since 2018.

Nursing a sore thumb and out of sync with receivers, Rodgers was 23 of 35 for 194 yards and the Packers went 0 of 6 on third down. Green Bay (3-4) had just 232 total yards of offense to Washington's 364 and lost Allen Lazard to a shoulder injury, making him the team’s third wide receiver to go down during the first losing streak under coach Matt LaFleur.

“We just got to play better — all of us," said Rodgers, who taped his throwing hand at halftime after jamming the thumb on a couple of snaps. “There’s probably a number of plays in every phase that we could’ve done better. The margin of error is so tight, a couple calls don’t necessarily go our way and we don’t execute at all on offense in certain situations. ...

Rodgers is right: The problems were not limited to offense. Amari Rodgers continued his struggles returning punts by muffing one that set Washington up in the red zone, and cornerback Eric Stokes was flagged for a costly illegal contact penalty that wiped out a fumble return touchdown and later for unsportsmanlike.

The negatives outweighed the few positives: a 63-yard pick-6 of Taylor Heinicke by De’Vondre Campbell and two touchdown passes from Rodgers to Aaron Jones — the second of which completed a 75-yard drive aided by Washington penalties that pulled the Packers within two with 3:26 left in the fourth quarter and gave them one final chance to end the skid before falling short.

Playing behind a remade offensive line without All-Pro left tackle David Bakhtiari, Rodgers struggled to find a rhythm, missing wide-open receivers at times and others putting the ball in their hands for ill-timed drops. The Packers rushed for just 38 yards.

The Packers had no third-down conversions for the first time since 1999 — 370 games ago with Brett Favre at quarterback and before Rodgers graduated high school. It added up to the Packers “losing to teams that we feel like we’re better than,” Jones said, and the losses rarely go like this for a team used to winning.

“Our guys are extremely disappointed,” LaFleur said. “I don’t think anybody thought we’d be in this spot that we’re in right now.”

With no blitzing necessary and a basic defensive scheme, Washington’s front four also played a role in frazzling Rodgers and making him look more like a rookie than a 38-year-old four-time NFL MVP. Only a series of penalties on the Commanders (3-4) made the game close in the final minutes.

Heinicke, making his first start of the season in place of injured Carson Wentz, threw for two touchdowns and was 20 of 33 for 200 yards after starting 1 of 7 for 14 yards with the interception. One of those TD throws was a perfect pass to Terry McLaurin.

“He plays like it’s his last game every single time,” McLaurin said of Heinicke. “That energy just spreads throughout this team. You just want to be able to make that play to elevate him.”

“You can win pretty; you can win ugly,” Commanders coach Ron Rivera said. “If you’re going to win ugly, who cares?”

HAIL TO THE WHO?

Washington picked this as its annual “homecoming game,” welcoming back dozens of former players who paraded around the stadium then met with fans before the game. Among those attending: Pro Football Hall of Fame member Art Monk and Super Bowl-winning quarterback Mark Rypien.

Embattled team owner Daniel Snyder was not present, but his wife, Tanya, spoke at a pregame rally that included a video of highlights from the 90 years since the franchise’s founding in 1932. Oddly, during her speech to the crowd, she made reference to “seven decades of fantastic football.”

She closed her remarks by making reference to the club’s old nickname, which was abandoned in July 2020, saying, “Hail to the Redskins. And let’s beat Green Bay.”

Packers: LB Rashad Gary was evaluated for a concussion in the second half. ... Bakhtiari (knee) was inactive after being added to the injury report Saturday. ... Green Bay as also without wide receiver Randall Cobb and reserve interior lineman Jake Hanson, who went on injured reserve.