After returning from ACL, Barkley faces a 2nd game in 4 days 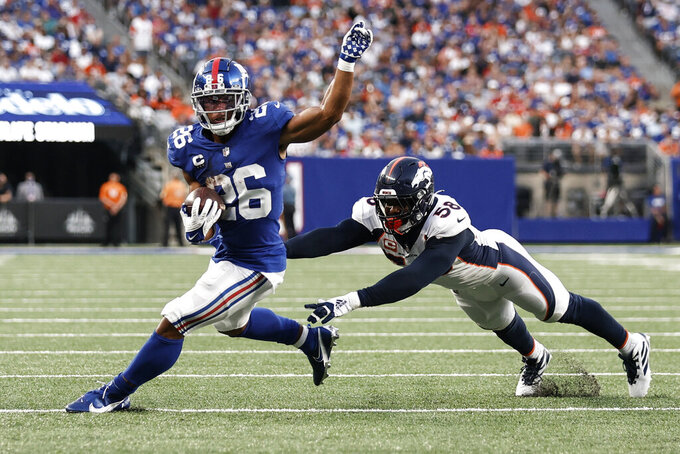 EAST RUTHERFORD, N.J. (AP) — Saquon Barkley beat the odds in returning from a major knee injury in less than a year.

While the timespan between games might be a first for an NFL player coming off an ACL injury, Barkley is up for the challenge when the Giants face Washington on Thursday night in an NFC East matchup.

Neither team played well Sunday in losing their openers. New York dropped a 27-13 decision to Denver and Washington was beaten 20-16 by the Chargers.

Like the teams, Barkley's numbers were not impressive. The 2018 NFL Offensive Rookie of the Year gained 26 yards on 10 carries and caught a pass for a yard.

His longest run was a 5-yarder on the first play from scrimmage. It was his first carry since Sept. 20, the day he was hurt against the Bears in Week 2.

Barkley insists his explosiveness as a runner is still there. He just has to knock off the rust, read the blocks better, react to the holes and break a tackle or two.

Barkley said he actually wrote that in his notes in going over the game.

The one thing that was normal was the Monday morning soreness, Barkley said. He job now is to recover quickly.

Barkley said he only was on the field for 25 to 30 snaps so his body was not taxed. He added the feeling of playing was great.

The Giants will need to pick up the running game if they want to improve. They had 20 carries for 60 yards. Quarterback Daniel Jones led the team with 27 yards rushing, all in the second half.

"We’ve got to get the run game going against a very talented defense — probably one of the best defenses in the league," Barkley said. “That’s going to be important to get your run game going. Watch film, learn from what I did, get the rust off and try to do a better job this week.”

The Penn State star, who was the second pick overall in the ‘18 draft, isn’t pushing coach Joe Judge for more carries. With 16 games to go, he knows he is going to get more touches. That's why he doesn't mind letting the coaches and medical staff plan his workload.

“Obviously, I want to go out there and try to be that do-it-all guy and help the team win, but it’s a nature of what I’m coming off of," said Barkley, who rushed for more than 1,000 yards in each of his first two seasons. “The way I get back into the flow is just by taking the plays that I get and trying to capitalize as much as I can and staying locked in on the sideline when I’m not in, mentally and physically.”

Safety Jabrill Peppers struggled in the opener and was only on the field for half the plays. He never left the field last season. He was unhappy Tuesday and called his performance subpar, saying he gave up two third-down passes for first downs and a pass in the red zone.

“Those are routes that I usually cover in my sleep,” he said. “It is what it is, I’ve just got to go back to the drawing board, hone in and get better.”