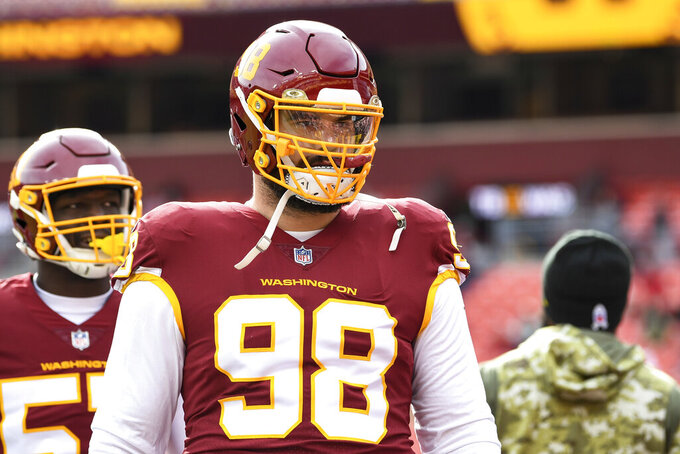 The latest developments in the Washington Commanders’ roller coaster of an offseason include a running back returning after initially agreeing to sign elsewhere, the surprising releases of two linemen — with one of their agents calling out a team official for lying — and confusion over when another big cut was happening.

After agreeing Tuesday to sign a $7 million, two-year deal with the Buffalo Bills, running back J.D. McKissic reversed course and decided to return to the Commanders under the same terms, according to a person with knowledge of the move. The person spoke to The Associated Press on condition of anonymity because the signing had not been announced.

The Commanders announced the releases of starting left guard Ereck Flowers, defensive tackle Matt Ioannidis and safety Deshazor Everett, which saves $19 million against the salary cap in 2022. Landon Collins' name was initially on that list and quickly removed, with the expectation the veteran safety will be released after June 1 to clear another $11.9 million.

Ioannidis’ release caught his camp off guard. Alan Herman said he and fellow agent Jared Fox met with Commanders VP of football administration Rob Rogers and director of pro personnel Chris Polian at the NFL scouting combine earlier this month for the specific purpose of making sure their client was in the team’s plans.

“They looked us straight in the eye, Rob Rogers, and Rob basically said to Jared and myself: ‘Absolutely not. We have no thoughts of releasing Matt Ioannidis,’” Herman told The Associated Press. “We don’t particularly care to be lied to to our face. I don’t like when someone lies to my face.

“They took him out of the free agent market now for two days. That puts us now at a disadvantage because other teams have paid other defensive linemen contracts, and (Ioannidis) hasn’t been able to take advantage of that. That’s not the way you conduct business in the National Football League.”

A Commanders spokesman said the team had no comment.

The conversation at the combine occurred before the Commanders agreed to acquire quarterback Carson Wentz and his hefty cap hit from the Indianapolis Colts. Wentz counts $28.3 million against the cap this season, and adding him gave Washington limited space to use in free agency.

Hours after speaking to The AP, Herman told ESPN that Washington general manager Martin Mayhew called to apologize, adding: “This is the first time I’ve ever had a situation like this with him. Always professional.”

The team already lost Tim Settle, who was part of the defensive line rotation along with Ioannidis, Jonathan Allen and Daron Payne. Settle agreed to sign with the Bills.

McKissic was thought to be Buffalo-bound, too, on a contract that could be worth up to $8 million. But the pass-catching back who was a favorite of coach Ron Rivera and offensive coordinator Scott Turner is instead returning to Washington for a third season.

The offensive line he and Wentz will be playing behind will look much different than 2021 after standout right guard Brandon Scherff left to sign with Jacksonville, and Flowers was released one year into his second tenure in Washington. Scherff’s departure was expected after the 2020 All-Pro played the past two seasons on the franchise tag, but Flowers’ absence creates a void on the left side of the line that has already undergone a major overhaul since left tackle Trent Williams held out and asked for a trade in 2019.

Flowers, the No. 9 overall draft pick in 2015 who is about to turn 28, started 16 games for Washington last season. He stabilized his professional career after a move from tackle to guard in his first stop with the team.

Ioannidis, 28, had been a staple on the defensive line since Washington drafted him in the fifth round in 2016. He played in 73 games and started 40, making 175 tackles and 24½ sacks.

Amid the chaotic movement of trading for Wentz, releasing three players and setting a plan to cut ties with Collins midway through an $84 million, six-year contract, the Commanders earlier this week agreed to re-sign starting safety Bobby McCain for $11 million over two years. After freeing up so much cap space, they are expected to be more active than anticipated when they acquired Wentz.

On Wednesday, the team tendered a restricted free agent offer of $2.4 million to kicker Joey Slye, agent Glenn Schwartzman confirmed. Slye made all 12 field goals he attempted and was 9 of 10 on extra points last season with Washington, which rotated through four kickers.

By Mark Anderson And Brett Martel 12 minutes ago
By Teresa M. Walker an hour ago
By John Marshall 2 hrs ago
By Greg Beacham 2 hrs ago
By Tom Withers 2 hrs ago