Aggressive Chargers falter down the stretch to miss playoffs 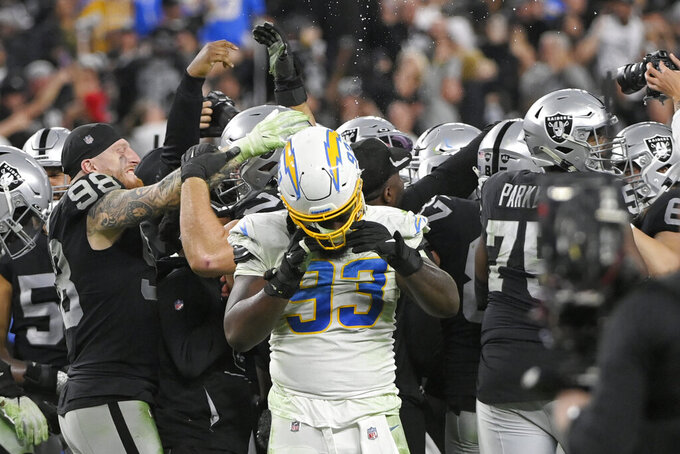 Brandon Staley vowed to be aggressive after being hired by the Los Angeles Chargers last January. The first-year coach lived up to his word down to the final series.

Staley’s fourth-down and timeout decisions got plenty of scrutiny on Monday, a day after a 35-32 overtime loss Sunday night to the Las Vegas Raiders denied the Bolts their first postseason appearance since 2018.

Staley’s players weren't among those questioning or second-guessing his game management.

“Man, we got his back. We support all his decisions,” safety Derwin James said. “When we went for it on fourth down, we didn’t get it, but we held them to a field goal, so it didn’t matter. On the timeout, we didn’t have all our guys ready and the package that we wanted. They could have snapped the ball and got an easy draw up the middle for the first down, so we needed to be ready.”

The Chargers finished 9-8, their fourth winning season since 2013. They converted 22 times on fourth down, the most since the league started keeping track in 1991. Their 34 attempts were second in the league to Detroit (41) and tied for sixth most.

A fourth-and-1 play from the LA 18-yard line during the third quarter, on which Austin Ekeler was stopped for a 2-yard loss by former Chargers Darius Philon and Roderic Teamer, was the only time the Bolts did not convert on Sunday night. They were 6 of 7 against Las Vegas, the most converted in a game since 1991.

Staley said he went for it deep in his territory to try and jump-start his team’s offense. The defense held the Raiders to a field goal, but the Chargers fell behind 29-14 before rallying in the final five minutes of regulation to send the game into overtime.

The teams traded field goals on their first overtime possessions before Daniel Carlson split the uprights from 47 yards on the final play to end Los Angeles’ season. A tie would have sent both teams to the playoffs.

The Chargers dropped three of their final five games. They got off to a great start by winning four of five, including a Week 3 rally at Kansas City. However, Los Angeles went 5-7 the rest of the way and won two straight games just once after Week 6.

If the Chargers are going to take that next step, the defense has to improve. Staley bought in an attacking 3-4 scheme, but LA ranked 23rd in total defense and third worst against the run.

The Chargers allowed 269 points after halftime, tied with the 2015 New Orleans Saints for most since 1991. The 138.9 yards per game allowed on the ground was the worst by a Chargers defense since 2003.

Justin Herbert was the first Chargers quarterback to throw for at least 5,000 yards (5,014) and set the franchise single-season touchdown pass mark with 38. He tied Tampa Bay’s Tom Brady for most 300-yard games with nine, but admitted he's still not fully comfortable in coordinator Joe Lombardi’s system.

Continuity at offensive coordinator and quarterbacks coach — which Herbert didn't have after his rookie year — should help.

“I think that’s still something I’m searching for. It is year one and an awfully tough offense to learn,” Herbert said. “We felt like we did our best, and there’s always still so much room for improvement. When we get that figured out, I think we’ll be able to play some pretty good football.”

TOP OF THE CHARTS

Ekeler tied Indianapolis’ Jonathan Taylor for most scrimmage touchdowns with 20. Ekeler is also the sixth player in league history with at least eight rushing and eight receiving touchdowns in the same season. He scored in each of the Chargers' last eight games.

“I actually got kind of emotional this morning. It’s been incredible,” said Ekeler, who had 12 rushing TDs and eight receiving. “Really just chipping my way to a position where now I can say that I’ve established myself in the NFL. It has always come down to me being who I am. And that was literally coming in, making the most out of my opportunity and building on that.”

This will be an important offseason for general manager Tom Telesco. The Chargers have made the playoffs twice and posted four winning records in Telesco’s nine seasons in charge.

Los Angeles is likely to enter free agency in March with nearly $70 million in cap space, second most in the league. Re-signing wide receiver Mike Williams and agreeing to an extension with James will be among Telesco's top priorities. He also needs to address the defense and offensive line.

There isn’t expected to be any coaching staff turnover.