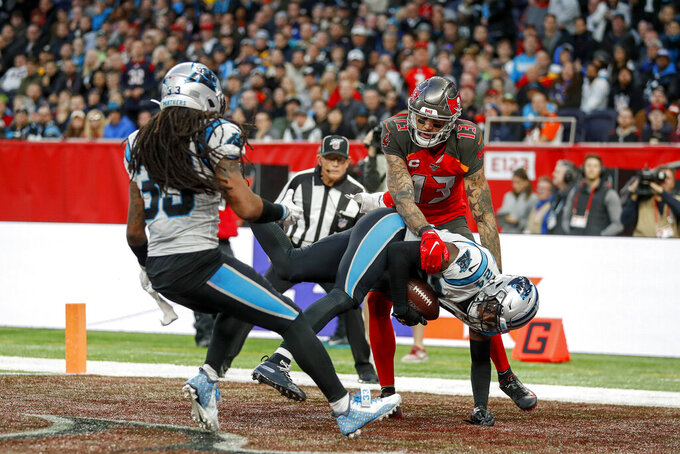 CHARLOTTE, N.C. (AP) — Truth be told, the Panthers could probably do without a bye this week.

Coach Ron Rivera's team is playing its best football since 2015, when it went 15-1 in the regular season and reached the Super Bowl.

The Panthers have battled back from losing their first two games to win their next four — three of those on the road — behind the surprising play of young backup quarterback Kyle Allen, versatile running back and MVP candidate Christian McCaffrey and a defense that's hitting quarterbacks hard and taking the ball away.

"That's why we put this group together, to win," said defensive lineman Gerald McCoy. "We knew who we were at the start. It's not over. It's six games. We have a whole season to play. We have a lot of work to do."

The defense has been doing its work for sure.

Over the past four games, nobody in the league has been better at wreaking havoc than Carolina. The Panthers (4-2) have 23 sacks and 14 takeaways during their four-game win streak and now lead the league in sacks.

It has come from all spots, too.

Against Arizona in Week 3, Mario Addison had three sacks and the team's outside linebackers had 5½ altogether. In Sunday's win over Tampa Bay in London, the Panthers got 5½ sacks from their interior linemen, including 2½ from McCoy.

Outside linebacker Bruce Irvin described the Panthers defense as "a bunch of dogs and a bunch of go-getters."

"It's very scary when you get a group of guys and we connect like we do," Allen added.

The turnovers are coming in bunches.

James Bradberry is making the most of his contract year with three interceptions while earning a reputation as one of the top cornerbacks in the NFL.

"We have to give credit to what the secondary has been doing, as well," Rivera said. "(Linebacker) Luke (Kuechly) is orchestrating it, the secondary is responding well. They're clamping, connecting, carrying receivers from one zone to the other, they're passing guys off. When you do those things, communicate as well as they have, the quarterback has to hold the ball, which we've seen. We've had some success because of that."

"I feel like every single time they were on offense, our defense had a chance to get a turnover or a sack," McCaffrey said.

McCaffrey hasn't been too shabby himself.

The third-year running back has electrified the league one-third of the way through the season.

A running game and a strong defense are normally the perfect recipe for any young QB to succeed, and Allen has used them to his advantage. He's been a solid game manager, having yet to throw an interception in his five NFL starts, although he has fumbled the ball away four times.

Allen has the fifth-best QB rating in the league, and his play on the field has some wondering if the Panthers should stick with him even after Newton is able to return from a mid-foot sprain.

Allen said the Panthers are playing like "a complete team all around."

Now the question will be if the Panthers can keep that momentum going after the bye week when they face the currently undefeated 49ers on Oct. 27.

"Our past four games, we've won them in a lot of different ways," Allen said. "A couple games put up points, a couple games our defense did pretty well. Christian had a lot of touchdowns. ... We're playing complementary football right now, making plays when we need to."