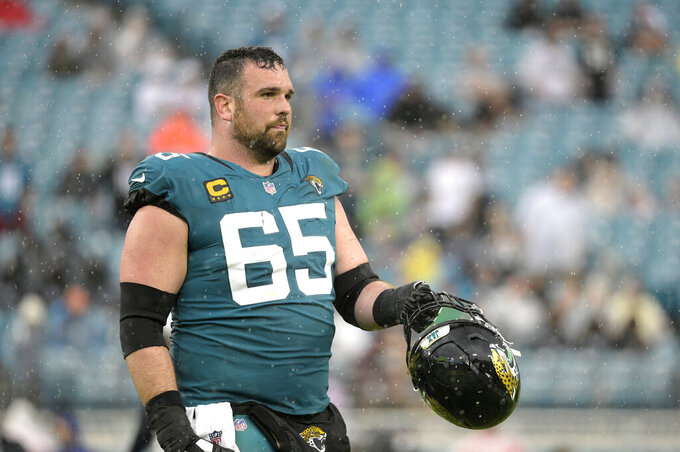 The Jaguars are giving Linder time as he contemplates retirement after eight injury-filled seasons, according to a person familiar with discussions. The person spoke to The Associated Press on condition of anonymity Friday because Linder is still weighing his options.

Linder and general manager Trent Baalke met Wednesday at the facility, about an hour before the start of the league’s new year. The meeting was initially scheduled to release Linder face to face, the person said, but Baalke agreed to give the five-time team captain some time to decide whether he wants to retire or try to play elsewhere.

“Brandon and I, in fact, just had a great conversation,” Baalke said. “We’re working through that as we speak. No decision has been made relative to Brandon as of right now. You know, we’re moving forward.”

Linder has played in 88 games, all starts, for the Jaguars since they drafted him in the third round from Miami in 2014. But the Florida native also has missed 41 games because of various injuries, including issues with knees, a shoulder, an ankle and his back. He's missed 22 games over the past four seasons, ending two of them on injured reserve.

He is entering the final year of his contract, which included a five-year, $51.7 million extension before the 2017 season. Jacksonville has paid him more than $44 million over eight years — roughly $500,000 for each game he's actually played.

He has no guaranteed money in 2022 and is due to count $9.53 million against the salary cap. Releasing him, trading him or letting him retire would not make a difference to the team’s cost savings, which would be $9.53 million.

There’s no doubt Linder could find a landing spot elsewhere. But his injury history and his personal situation might cause him to consider doing something else entirely.

He got married in February 2021, and his wife, Lauren, graduated from the University of Miami’s medical school last summer. She is in her first year of residency at Jackson Memorial Hospital in Miami, making their commute more doable than most NFL cities.

Jacksonville already has made one contingency plan for Linder’s pending departure. The team re-signed longtime backup center Tyler Shatley to a two-year, $4.8 million contract last month. Shatley has played in 111 games, with 33 starts, since making the team as an undrafted rookie in 2014. He replaced Linder in the lineup for the final eight games last season.

Bringing back Shatley was one of several moves designed to bolster a unit that allowed rookie quarterback Trevor Lawrence to get sacked 32 times in 2021.

The Jaguars also have the No. 1 pick in next month’s NFL draft and could use it on Alabama left tackle Evan Neal or North Carolina State’s Ikem Ekwonu. They have 11 more picks in the three-day draft and could use multiple picks to add pieces to the line, especially considering Robinson and right tackle Jawaan Taylor could both be on one-year deals.