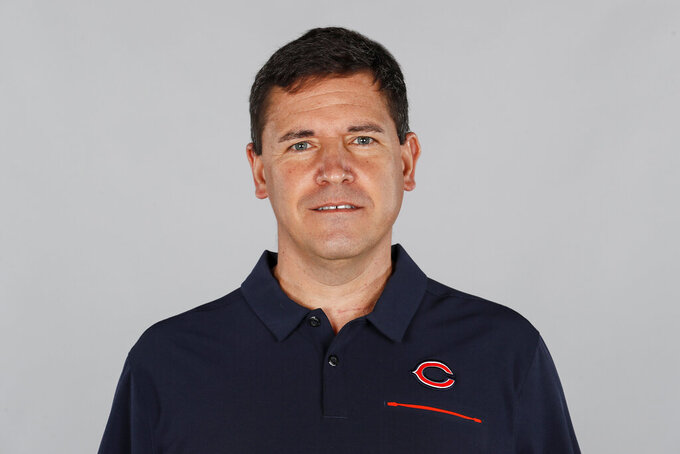 This is a 2021 photo of Bill Lazor of the Chicago Bears NFL football team. This image reflects the Chicago Bears active roster as of Friday, April 16, 2021 when this image was taken. The Chicago Bears could be without all three of their coordinators, including Lazor, when they host the Minnesota Vikings on Monday, Dec. 20, 2021. (AP Photo)

Several asymptomatic, vaccinated NFL players tested positive for COVID-19 on the first day of “targeted” testing, a person familiar with the results told The Associated Press on Monday.

Overall, 47 players were placed on the reserve/COVID-19 list, the most in a single day since the pandemic began. The person, speaking on condition of anonymity because of privacy issues, didn't specify how many of the players are asymptomatic and fully vaccinated.

Players who test positive must quarantine until they're cleared to return. Under the NFL's revised protocols which went into effect Monday, asymptomatic, vaccinated players can return in less than 10 days.

Kelce, cornerback Charvarius Ward and kicker Harrison Butker tested positive. All played last Thursday night against the Chargers, when Kelce had a career-high 191 yards receiving and caught the tying touchdown pass in the fourth quarter and the winner in overtime.

Jets right guard Laurent Duvernay-Tardif, who opted out last year to work on the pandemic’s front lines, was asked about the chances some players might try to conceal their symptoms in order to continue playing.

“Of course that’s the down side, and I guess we’ll know more in the next week and we’ll see after next Sunday what really happened in terms of the number of cases and everything,” said Duvernay-Tardif, who has a doctorate in medicine and a master’s in surgery. “I just hope that guys are going to be honest with themselves, because at the end of the day they’re putting me at risk as a player who’s following the rules and the guidelines because they’re going on the field with symptoms.

“We’re all in this together. The goal is obviously to finish the season and play all the games, but it’s also to stay healthy, so I think we’ve just got to be honest with ourselves.”

Cleveland, which was lost 16-14 to Las Vegas on Monday — a game moved from Saturday because of the Browns' COVID-19 outbreak — started third-string quarterback Nick Mullens with Baker Mayfield and his backup, Case Keenum, both out while in coronavirus protocols.

Only one Cleveland starter, safety John Johnson III, was activated from the protocols before the game Monday.

Two other games were moved from Sunday to Tuesday night: Washington at Philadelphia and Seattle at the Los Angeles Rams. Washington and the Rams had the major COVID-19 outbreaks that forced those games to be moved.

—Guard Brandon Scherff, a 2020 All-Pro, became Washington’s latest player to go on the COVID-19 list. Defensive tackle Matt Ioannidis came off the list Monday on the eve of Washington’s rescheduled game at Philadelphia. Top quarterbacks Taylor Heinicke and Kyle Allen remain unavailable but could test out of protocol hours before the Eagles game. Washington will be missing several coaches for the game for virus-related reasons.

“We had a bit of a COVID run this morning,” Jets coach Robert Saleh said. “They still have a chance to make it this week. They’ve got to go through the protocol, in regards to being asymptomatic and two negatives and all that stuff — whatever the protocols are. But that’s where we’re at.

—Seattle added defensive tackle Bryan Mone to its COVID-19 list on Monday, the seventh player on its 53-man roster to join the list since last Thursday. Mone has started four games, but was expected to be a game-time decision against the Rams because of a knee injury suffered in Week 14 against Houston.

Also, Seattle linebackers coach John Glenn will not attend Tuesday’s game because of an illness. Coach Pete Carroll said last Friday there was one coach that had tested positive for COVID-19.

—Baltimore, which has been ravaged by injuries as well, added linebacker Justin Houston to the reserve/COVID-19 list. He had a half-sack Sunday in the team’s 31-30 loss to Green Bay.