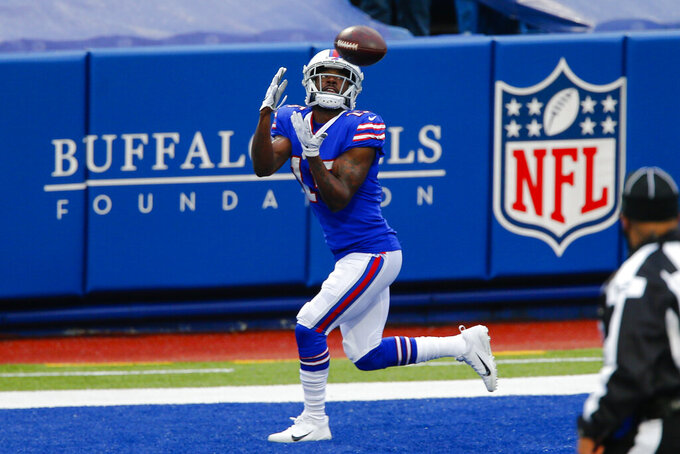 ORCHARD PARK, N.Y. (AP) — Josh Allen and the Buffalo Bills were intent on not easing into the playoffs, while ending the Miami Dolphins' chances.

In a season-ending game in which the Dolphins had far more riding on the outcome, the Bills put an empathic stamp on their breakthrough year with a 56-26 rout on Sunday. In clinching the AFC’s second seed, Buffalo will host its first playoff game in 24 years by facing the the Frank Reich-coached Indianapolis Colts next Saturday at 1 :05 p.m. EST.

Reich is the former Bills backup who 28 years ago to the day led Buffalo to overcome a 32-point deficit in a 41-38 overtime win over the Houston Oilers in what still stands as the largest comeback in NFL history.

For Miami, the loss left coach Brian Flores and the Dolphins on the outside looking in by squandering an opportunity to clinch just their first postseason berth in 18 years. Rather than taking care of their own business by clinching a playoff berth with a win, the Dolphins’ postseason ended with the Colts clinching the No. 7 seed by defeating Jacksonville.

“We’re just worried about today, that’s where my mind is — our performance today. It’s not on anything other than that,” Flores said. “It wasn’t good enough. Right now, I’m disappointed we didn’t play well today.”

The Dolphins (10-6) didn’t get results they needed earlier in the day after Cleveland beat Pittsburgh and Baltimore routed Cincinnati. And the team unraveled in all three phases in being exposed by a Bills team showing no signs of relenting in racking up the second-most points in team history.

After falling behind 3-0 on Jason Sanders' 49-yard field goal, Buffalo responded by scoring four times in the second quarter to build a 28-6 lead at halftime. And the Bills didn’t let up in the second half.

Rather than rely on Cleveland beating Pittsburgh, Buffalo wrapped up the AFC’s No. 2 playoff seed with the win.

“It just shows that this is a different Buffalo Bills football team. We don’t have to get in on anybody’s back,” left tackle Dion Dawkins said. “This is all our doing. And it feels good to kick that front door out and sweep the East.”

Allen threw three touchdown passes and Isaiah McKenzie scored three times, including returning a punt return 84 yards. The defense even got on the scoreboard with Josh Norman returning the first of three Tua Tagovailoa’s interceptions 16 yards for a touchdown.

Allen finished 18 of 25 for 224 yards passing in playing just the first half before being replaced by Matt Barkley. Allen upped his total to 4,544 yards passing, to eclipse the team’s single-season record of 4,359 set by Drew Bledsoe in 2002.

Buffalo matched a franchise record with 13 wins, set in both 1990 and ’91, while also completing its first season sweep of division rivals.

The young, rebuilding Dolphins might have finished with double-digits wins for just the second time in 11 years, but fell well short at Buffalo.

“Nobody wants to get beat like that,” Dolphins cornerback Xavien Howard said.

“They’ve got a lot of weapons. Josh Allen, man, is a great quarterback doing some great things with the guys he’s got around him,” he added. “I feel like we’ve got something here. Everybody believes in Flores. Even though we came up short, I feel like the future is bright for us.”

Maybe not so bright yet at quarterback.

Tagovailoa finished 35 of 58 for 361 and three interceptions — one more than he had all season — over the span of four second-half possessions.

He closed the season with a 6-3 record, and didn’t have Ryan Fitzpatrick to bail him out as the veteran backup did in rallying Miami to a last-second 26-25 win at Las Vegas last weekend. Fitzpatrick didn’t travel with the team after testing positive for COVID-19 on Thursday.

“That’s not the way we wanted to go down. There are a lot of things to learn from,” Tagovailoa said. “All I can do is continue to grow, continue to get better.”

The Dolphins’ usually stout defense, which entered the game leading the NFL in allowing just 18.8 points per game, instead allowed the fourth-most points in franchise history, including the playoffs.

The Bills backups on offense combined for three touchdowns in the second half. Rookie running back Antonio Williams scored two TDs rushing in his NFL debut, a day after being called up from Buffalo’s practice squad.

Barkley went 6 of 13 for 164 yards, including a 56-yard TD pass to Gabriel Davis, and an interception.

Howard matched a single-season franchise record with his 10th interception by picking off Barkley in the third quarter. Howard matched the team record set by Dick Westmoreland in 1967, and became the NFL’s first player to have 10 interceptions in one season since Antonio Cromartie had that many with the Chargers in 2007.

Bills: Face the Colts on Saturday, hosting the first playoff game since a 30-27 loss to Jacksonville in the wild-card round and Hall of Famer quarterback Jim Kelly’s final game on Dec. 28, 1996.