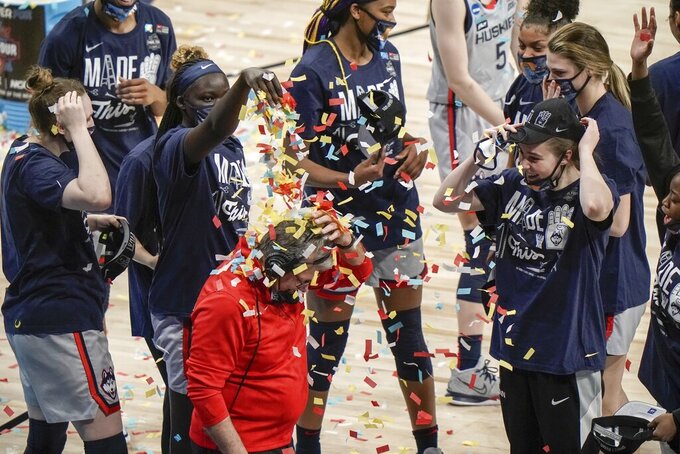 UConn head coach Geno Auriemma is dunked with confetti after an NCAA college basketball game against Baylor in the Elite Eight round of the Women's NCAA tournament Monday, March 29, 2021, at the Alamodome in San Antonio. UConn won 69-67 to advance to the Final Four. (AP Photo/Morry Gash)

SAN ANTONIO (AP) — Sue Bird has a different take on the ending to the Baylor-UConn Sweet 16 matchup: The former Huskies point said Tuesday that it was actually good for the growth of women’s basketball.

She said people talking about the sport is a good thing even if it’s a little controversial. There have been a lot of opinions swirling about UConn's 69-67 Monday win where no foul was called after Baylor's DiJonai Carrington was hit in the face and on the elbow by defenders.

The four-time Olympic gold medalist, currently training in San Antonio with USA Basketball's women's national team, said hearing and seeing people debate the no-call on TV and social media is the bigger moment for her sport.

“Having storylines and conversation surrounding women’s basketball, even if it's a little controversial, even if it gets a little heated, that's good for the growth of the game,” Bird said. “So I'm excited to see that.”

And as for which side of the debate Bird is on, she said: “You know what if there's no call, there's no foul right."

Diana Taurasi, who led UConn to three straight national titles herself, had a different take.

The woman Bird pointed to when asked who the best women's player was only a few minutes earlier, said: “If I was the one shooting, I'd be pretty mad right now.”

Golden State Warriors coach Steve Kerr is catching as much of the women’s tournament as his schedule allows.

Before hosting the Bulls on Monday night, Kerr watched Baylor and UConn. Huskies star freshman Paige Bueckers has a big fan in Kerr.

He also cheered the women from Arizona, where Kerr played collegiately. Kerr said he's just blown away by the talent level and called Bueckers mesmerizing.

“The reason I bring that up it’s just a reminder the quality of play has just skyrocketed in the women’s game,” Kerr said. "It’s so fun to watch.”

Journalist Pepper Persley has been covering women’s basketball for about four years, so almost half her life.

Among other projects, the 10-year-old hosts two podcasts, her own “Dish with Pepper” and the popular “She’s Got Next” on the women’s basketball website The Next, for which she also writes. She interviews everyone from players and coaches to women in the front office on issues ranging from the WNBA draft to the Black Lives Matter movement.

Her editor at The Next, Megdal, said he reached out to Persley after seeing her on some WNBA Zoom news conferences last summer and noting how knowledgeable and prepared she was when interviewing players.

Persley said she get’s nervous before interviews, but not because she’s talking to famous sports figures. She doesn't want to mess up her question.

“Then it kind of ruins not only my rep, but kids’ rep," Persley said. "Because sometimes kids are seen as kind of a joke in these rooms, like, ‘Oh someone hired a kid to be cute and ask a ridiculous question.’ I want to show the professionalism that kids can actually have.”

She works from home in New York, where there have been some obstacles, such as games that start past her 8:30 p.m. bedtime. Persley said her parents have let her stay up to cover regional finals that start at 7 p.m. ET.

The University of Connecticut had its own Miami Dolphins moment on Monday night when the Huskies edged Baylor to move into the Final Four.

The NFL’s Dolphins famously celebrate each year when it becomes clear the team’s record of going undefeated in 1972 will hold for at least one more season.

By eliminating the Lady Bears, UConn ensured that it will remain, for at least one more season, the only school to ever win the men’s and women’s NCAA Tournaments in the same year.

Baylor was the last team alive that still had a chance of joining Connecticut. Baylor’s men reached the Final Four last night with an 81-72 win over Arkansas.

The number of tests run at the women’s NCAA Tournament now is up to 16,300 with still no new positives have come in for COVID-19.

The last positive test results are through Monday. Only two total have been found among the players, coaches and others working at the tournament using daily antigen testing, and the last positive came from testing through March 21. Any false positives are quickly retested using the PCR test, which is considered more accurate.