Brees, Roethlisberger, Foles, Darnold. Who's next to go? 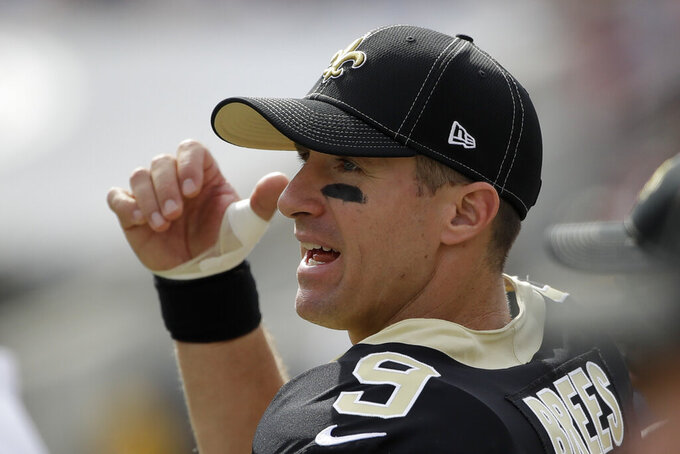 New Orleans Saints quarterback Drew Brees watches from the sidelines after getting hurt during the first half of an NFL football game against the Los Angeles Rams Sunday, Sept. 15, 2019, in Los Angeles. Brees has been diagnosed with a torn ligament near the thumb of his throwing hand that is expected to sideline him at least six weeks, said a person familiar with the situation. Brees has elected to have surgery, but it is not yet clear when the operation will take place or who will perform it, the person said. The person spoke to The Associated Press on condition of anonymity Monday, Sept. 16, 2019.(AP Photo/Marcio Jose Sanchez)

The way NFL quarterbacks having been going down or losing their jobs just two weeks into the season, it's no stretch to wonder who's next.

The list already is way too long and includes some surprises. Drew Brees and Ben Roethlisberger hardly ever miss a game, yet Brees is out until sometime in November with thumb damage, and Big Ben is done for the year with an elbow injury. Both required surgery.

Nick Foles' season was shortened in Week 1 for Jacksonville. The Jets' Darnold contracted mononucleosis and probably won't be back until mid-October, and his sub, Trevor Siemian, tore angle ligaments on a brutal tackle by Cleveland's Myles Garrett.

Cam Newton's status is dicey because he has aggravated a mid-foot sprain. And don't forget that Andrew Luck retired from the Colts in the preseason after an accumulation of injuries.

At least Eli Manning didn't have anything hurt except perhaps his feelings when he was benched Tuesday in favor of his heir apparent, first-round draft pick Daniel Jones.

Several were because of poor performances by the starters. Others, like with the Giants and Jones, were getting the future into the present on the field.

But Philadelphia, Washington, Carolina, San Francisco, Tennessee, Cincinnati and New York made switches because of injuries. The Panthers probably wish they had shelved Newton and his ailing throwing shoulder much earlier than they did as they dropped seven straight after a 6-2 first-half record.

With quarterback by far the key position on offense in the current NFL, here's a look at how each team that was forced into or decided to make a change might deal with the situation.

Losing a certain Hall of Famer such as Brees is a monstrous hit, yet the Saints might be in better shape than the other clubs whose No. 1 is on the sidelines. Teddy Bridgewater, while not the same QB he was before a massive knee injury cost him basically two seasons, is a quality backup. Sean Payton will adjust the offense as need be, he has Alvin Kamara and Michael Thomas to aid Bridgewater, and the New Orleans defense is gritty.

No, shootouts such as New Orleans fans are accustomed to won't fit the Saints without Brees. But the NFC South isn't looking too formidable, and Bridgewater should be able to keep the team in the playoff conversation until Brees returns.

Last year, Pittsburgh was quite high on Josh Dobbs as Roethlisberger's backup. Then second-year pro Mason Rudolph beat out Dobbs, who then was traded to Jacksonville after Foles went down.

Rudolph is inexperienced, but looked comfortable enough after replacing Big Ben in last Sunday's loss to Seattle. He's athletic enough, will operate behind a usually solid line and has JuJu Smith-Schuster as his game breaker. But to expect a lot against the unbeaten 49ers on the road, the stingy Ravens at home and the Chargers in LA before their bye week is unfair.

Foles was the best backup quarterback in the league while in Philadelphia, one of the rare No. 2s to guide his team to a Super Bowl title. He parlayed it into a massive contract to solve the Jags' quarterback quandary. That didn't last a full game, and Jacksonville has turned things over to rookie Gardner Minshew, the 178th selection in the draft. Expect more pain — these of the growing kind.

Like the Jags, the J-E-T-S thought they had solved their quarterback woes when they drafted Darnold third overall in 2018. He struggled early in his rookie campaign, but came on after missing three starts with a foot problem. With new coach Adam Gase, a supposed QB guru, Darnold's 2019 looked bright.

Now, he's looking at recovering from a strength-sapping disease that can take months to completely shake.

Siemian was signed for similar scenarios, and he might have been a good choice. We won't know after Garrett's hit.

So Luke Falk takes over. His "claim to fame" might be he preceded Minshew in Mike Leach's pass-first attack at Washington State.

Newton suddenly has become brittle, leaving do-everything RB Christian McCaffrey as the only real weapon, and defenses are wise to that. Untested Kyle Allen steps in, and the Panthers (0-2) might be able to rekindle their deep passing game that basically has disappeared with Newton.

Carolina's best chance to stay relevant is based on stud LB Luke Kuechly and the defense resembling the unit that helped carry the team to the 2015 NFC championship.

Coach Pat Shurmur felt the most accomplished quarterback in franchise history couldn't be a winner this year, so it makes sense to try the sixth overall draft pick, Jones. Shurmur almost certainly recognizes his job security faded with each loss behind Manning. At least if Shurmur can make progress with Jones, the coach could be around beyond this season.

Meanwhile, Giants fans screaming for the kid to play have their wish. And Giants fans still screaming at taking Jones so high in the draft will likely make rash and rushed opinions about him.