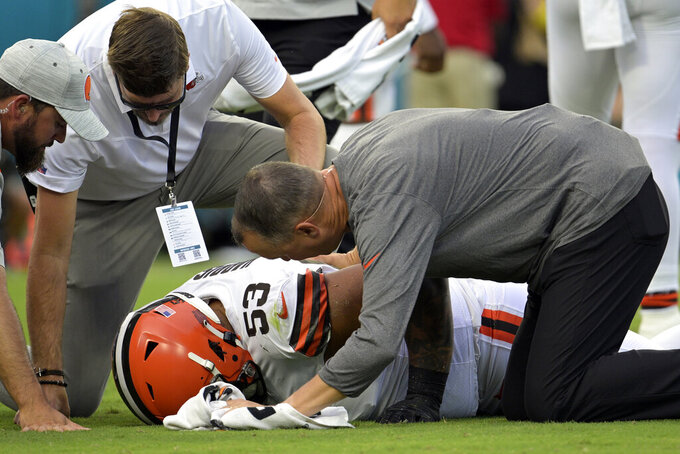 FILE - Cleveland Browns personnel check on Cleveland Browns center Nick Harris (53) after he was injured during the first half of an NFL preseason football game against the Jacksonville Jaguars, Friday, Aug. 12, 2022, in Jacksonville, Fla. (AP Photo/Phelan M. Ebenhack, File)

CLEVELAND (AP) — Cleveland Browns starting center Nick Harris will likely need season-ending surgery on his right knee that was injured on the second play of the exhibition opener against Jacksonville on Friday night.

Coach Kevin Stefanski didn't provide any details on Harris' injury or test results. He said surgery was “likely” but that the team is continuing to gather information before finalizing plans.

“All of these injuries stink," Stefanski said Saturday on a Zoom call with reporters. "You don’t want anybody to get injured and Nick is certainly a guy who has worked so hard this offseason, so we’re really hoping that it’s not a season-long thing because the kid has worked so hard.”

Harris was dropping back into pass coverage when his right knee appeared to buckle while blocking a Jaguars defender. He laid face down for several seconds before being checked by medical personnel and carted off.

Ethan Pocic, who signed as a free agent in the offseason after five seasons with Seattle, replaced Harris.

“Ethan went in there and did a really nice job,” Stefanski said. "He’s been with us since April. We went out and got him for a reason and we’re excited about what he did last night.”

A fifth-round pick in 2020, Harris has been taking all the snaps with Cleveland's first-team offense in training camp and was on his way to replacing veteran JC Tretter, who was waived during the offseason and remains a free agent.

Tretter was reliable for the Browns, starting 80 games in five seasons. He also has been the NFL Players Association president for the past two years, and was voted to a second-term before being released by Cleveland.

Stefanski declined to address any renewed interest in Tretter, instead reiterating how well Pocic played.

Harris' injury was the second significant one for the Browns this week. Return specialist Jakeem Grant Sr. tore his left Achilles tendon in practice Tuesday and will miss the season. A Pro Bowler with Chicago last season, Grant signed a three-year contract worth up to $13.8 million to help fix Cleveland's shaky return game.