Cardinals, Eagles far from perfect but both have momentum 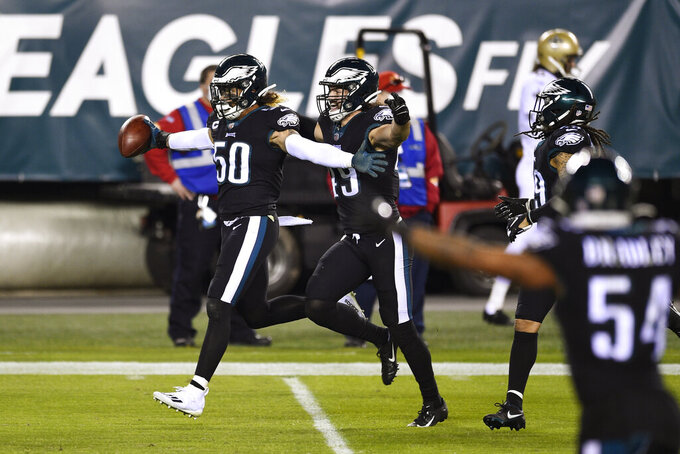 That's especially true when the Cardinals are losing football games. Smiles were hard to come by during Arizona's recent three-game losing streak, but a 26-7 victory over the New York Giants last weekend got the team back on track.

Now there's more important December football to be played. The Cardinals (7-6) host the Philadelphia Eagles (4-8-1) in a game with playoff implications for both teams. Murray's scowl hasn't completely disappeared, but the 23-year-old QB said intensity is just part of his game.

“You may see my face sometimes and it may not look like I’m having fun, but I want to win,” Murray said. "So once we win we can have fun, we can smile and stuff like that. I love playing football.”

Sunday's game will be an intriguing matchup between two young quarterbacks. Jalen Hurts is supposed to make his second career start for the Eagles after taking over for struggling starter Carson Wentz. The rookie helped lead the Eagles to a 24-21 win over the New Orleans Saints last weekend, which kept the team's playoff hopes alive in a murky NFC East.

Now Hurts has to contend with an Arizona defense that played very well in last week's win over the Giants. The Cardinals had eight sacks, including five from linebacker Haason Reddick.

“For a young quarterback, it can be confusing,” Eagles coach Doug Pederson said. "Bodies are flashing in front of your eyes, and it makes you sort of drop your eyes and look at the rush a little bit more. We’ll work on it this week as much as we can, and hopefully we can stay out of harm’s way.”

Reddick had one of the most productive games for an NFL defensive player all season and set a franchise record when he had five sacks against the Giants.

Reddick has 10 sacks this season and his production has been vital, especially since 2019 All-Pro Chandler Jones was lost for the season because of a biceps injury in October. The 13th overall pick in the 2017 draft struggled during his first three seasons in the league as different coaching staffs asked him to do play a variety of roles.

Second-year defensive coordinator Vance Joseph moved Reddick to his natural spot as an outside linebacker and his production has exploded.

Reddick's improvement is one big reason the Cardinals have improved so much on defense. They were one of the worst units in the NFL last season but this year rank in the middle of the pack in most categories.

Quarterbacks have run for 364 yards against the Eagles this season. Lamar Jackson had 108 in Baltimore’s win in Philadelphia in October. Daniel Jones had 156 in two games for the Giants. Now Murray presents another difficult challenge: He has 712 yards rushing and 10 TDs on the ground in 13 games.

"Every player stands on his own in the NFL, and what we’re going to try to do against Kyler Murray will be specific for his skill set and their offense. It won’t be based on what we did against Russell Wilson, Lamar Jackson or any of the other guys that we’ve faced that are dual-threat quarterbacks.”

Cardinals tight end Dan Arnold has become a bigger part of the offense in recent weeks, catching four touchdowns over the past four games.

The 6-foot-6, 220-pounder, who played in college at NCAA Division III Wisconsin-Platteville, has found a home in the desert. Teammates and coaches used to rave about him during practice. Now it's carried over to the games.

“The fact that I’ve seen him do it adds confidence,” Murray said. “I just try to give him a chance, put it to only where he can get it. He’s super athletic, fast, jumps high, got great hands.”

The Eagles will start their 12th different offensive line combination in 13 games because rookie right tackle Jack Driscoll sustained a knee injury against the Saints. Matt Pryor will take his spot.

After allowing 53 sacks in the first 12 games, the offensive line didn’t give up any against the Saints.

“You have to have guys ready to go. You’re going to have injuries,” Kelce said. “It’s been really valuable for the team to see those guys compete. The young guys have stepped up and played pretty darn well. The O-line is trending in the right direction.”