Chargers' James happy to go against another opponent 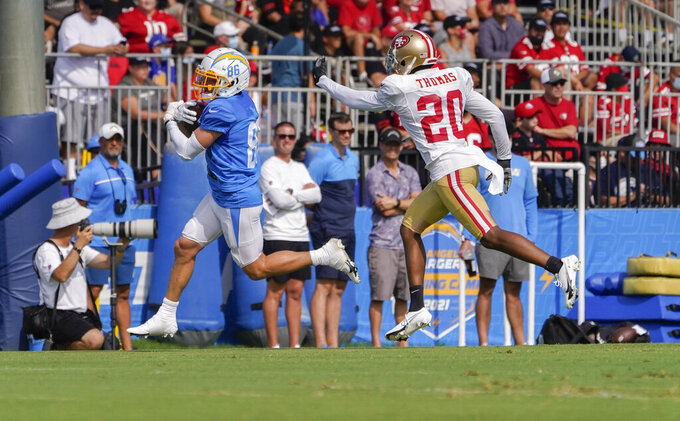 COSTA MESA, Calif. (AP) — Sometimes the smallest things such as Derwin James walking to the podium can have huge significance during training camp.

For the first time in nearly 19 months, James got in productive work against another team as the Los Angeles Chargers faced the San Francisco 49ers in the first of two days of joint practices on Thursday.

It is the most work against another team that James and most of the veterans will get until the Sept. 12 opener at Washington.

“It’s big for me. We’re going out here going fast,” James said. “Their offense is one of the best in the league. Seeing the looks from them only helped me get better.”

As long as James can get through Friday unscathed, it will be considered a victory.

James was an All-Pro selection as a rookie in 2018, but has played in only five games the past two seasons because of training camp injuries.

There was the stress fracture to his right foot two years ago during practices against New Orleans that kept him out of action for 11 games.

Last year James tore the meniscus in his right knee during a team scrimmage that sidelined him for the season.

James is still considered one of the best safeties in the league despite the limited action over the past two seasons. New coach Brandon Staley will line up James all over the field as well as having him call the plays on defense.

“I feel like I could go again,” James said “With how we built this practice and everything, I got my legs under me, and I’m ready to go. I feel like I'm one of the leaders of the team now and I want to be available.”

Staley said he has been happy with how James has understood the play calls throughout camp.

“That’s what I love about him, it’s like we’ve been doing this for 10 years,” Staley said. “He’s starting to finish my sentences now, then there’s an, ‘I got you coach.’ That’s what you want to hear. He’s doing an outstanding job with that.”

James spent most of his time matched up against tight end George Kittle in what was a strong performance by the Chargers defense.

James nearly came up with an interception against Jimmy Garoppolo during the red zone period, but had it bounce off his hands.

“The energy, his technique; I think he’s hitting the sweet spot too,” Staley said. “It just reaffirms his confidence within himself. I think all that he’s built within the offseason and during the initial stages of training camp is measurable when he puts himself against a premium player, against a premium team. That’s going to build even more confidence in his game. I think you could see that out there today.”

James wasn’t the only member of the secondary to have a strong day. Second-round pick Asante Samuel made a diving interception on a pass thrown by Garoppolo in the red zone while first-year corner Kemon Hall, who was claimed off waivers from Dallas during the offseason, had an interception off rookie Trey Lance.

It was also an interesting matchup of coaches with San Francisco’s Kyle Shanahan calling the offense against Staley and the Los Angeles defense.

“It was a good challenge for us. I’m always a fan of seeing new looks, new defenses, all that stuff. And I thought we handled it well. It was competitive all the way through, and I love this stuff,” Garoppolo said.

The other thing both coaches had to love was that it wasn't chippy for the most part. The only minor fracas came late in the practice when Shanahan walked into the Chargers huddle and told linebacker Kyzir White that it was a non-tackling drill after White took 49ers running back Raheem Mostert to the ground.

NOTES: Both Chargers starting offensive tackles are being held out for both days. Left tackle Rashawn Slater (back) and right tackle Bryan Bulaga (hip flexor) would have been available if it was a normal game week according to Staley. ... S Nasir Adderley (migraine), LB Chris Rumph (foot) and WR Joe Reed (foot) are also other Chargers injuries of note. ... Shanahan said offensive tackle Trent Williams isn't practicing after having his knee drained because of minor swelling. ... Shanahan also said WR Jalen Hurd (knee tendinitis) and OL Aaron Banks (shoulder) are also being held out this week with hopes they can play in next week's preseason finale against Las Vegas.