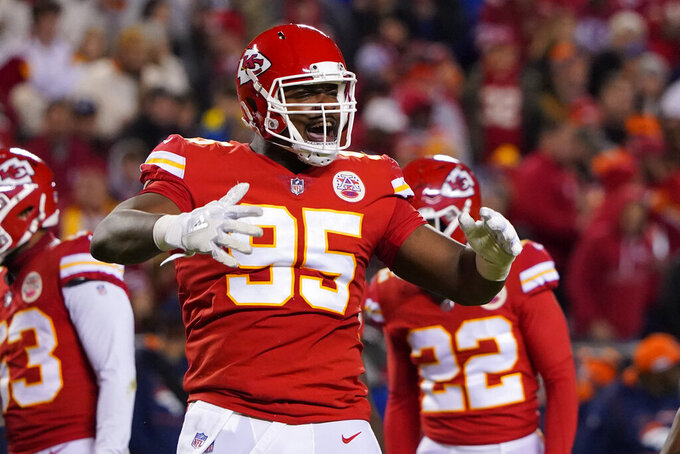 KANSAS CITY, Mo. (AP) — The Kansas City Chiefs probably look back wistfully these days to their last game against the Raiders.

It was the only time in about two months their offense looked like normal.

Andy Reid's high-powered, thrill-a-minute cast of characters that carried the Chiefs to consecutive Super Bowls has been uncharacteristically stuck in neutral this season. The Chiefs have topped 22 points just once since mid-October, and that was in a 41-14 rout of their longtime AFC West rival in Las Vegas last month.

“Every day is different in this league. That's why you have to prep and focus so much this week,” said Reid, who needs one win to reach 100 in Kansas City. “You have to remember, the other team is playing. You're not doing it against air. You have to go out and execute and do it every day.”

The Chiefs (8-4) have won five straight to take a one-game lead on the Chargers and a two-game lead on the Broncos and Raiders (6-6) as they seek a sixth straight AFC West crown. But their winning streak has been fueled by their suddenly stingy defense, which has held three of its last four opponents to fewer than 10 points.

That includes the Packers — albeit without Aaron Rodgers — along with the Cowboys and the Broncos.

“They are all great players and sometimes it just takes a little bit to be, ‘OK, this is what we are going to be good at right now,’” Raiders quarterback Derek Carr said. “From the first half of the year to the second half, are they doing things much different? I mean, you still see the same things. Maybe they are executing a little bit better and things like that, but any time I play these guys I know what I'm in for and it's going to be a tough match.”

What began as such a promising season for the Raiders is starting to spiral into another forgettable one. Their loss to the Chiefs last month came during a three-game skid, and last week's loss to Washington made it four in their last five.

Much like the Chiefs, the culprit for the Raiders has been an inconsistent offense.

Unlike the Chiefs, their defense hasn't been able to bail them out.

“In the games that have either gone down to the wire for us, or certainly the ones we've had a chance to win at the end, we started fast,” said Raiders interim coach Rich Bisaccia, whose team has been outscored by 30 points in the first quarter.

"When it goes in your favor that way, you feel like you can keep rolling. When it doesn’t, well, we’ve been 14 down and come back and won a game as well this year. So, either way, we have to keep going. But we’d certainly love to start fast.”

The Chiefs' defense could be even stingier this week with the return of Rashad Fenton, who is rated among the league's top cornerbacks by Pro Football Focus. The versatile Fenton missed last week's game with a knee injury.

The Raiders' defense also could get a lift if cornerback Trayvon Mullen can play for the first time since a foot injury in Week 4. But Las Vegas will be without tight end Darren Waller, who will miss his second straight game with a knee injury, and could be missing linebacker Denzel Perryman, who is doubtful after hurting his ankle last week.

The Chiefs have done a good job of taking advantage of Raiders safety Johnathan Abram’s coverage issues the past two seasons. Abram was beaten for the game-winning TD pass by Travis Kelce in the second meeting in 2020 and allowed nine catches on nine targets for 127 yards and two TDs in their Week 10 loss this season.

With Waller dealing with injuries the past two weeks, slot receiver Hunter Renfrow has emerged as Derek Carr’s most reliable target. Renfrow has 17 catches for 236 yards, joining Hall of Famer Tim Brown as the only Raiders with at least eight catches and 100 yards in consecutive games in the same season.

“It’s very easy to see the importance of Hunter Renfrow, not only to our offense but to our team,” Bisaccia said. “He’s a mingler, he’s a locker room guy. He’s really matured as far as a leader in his own way. It’s easy to identify him on the field because the ball seems to find him all the time and usually the ball finds good players.”

Kelce is tied for the league lead with 10 dropped passes, and Tyreek Hill already has a career-high seven, with both of Patrick Mahomes' favorite targets having passes bounce off them for interceptions.

All together, Kansas City has the third most drops in the NFL with 20 — a big reason why its offense has gone haywire.

“It just happens. It's part of football,” Mahomes said. “Luckily our defense is playing well enough that when they have happened they've gotten stops and not let them impact the team.”