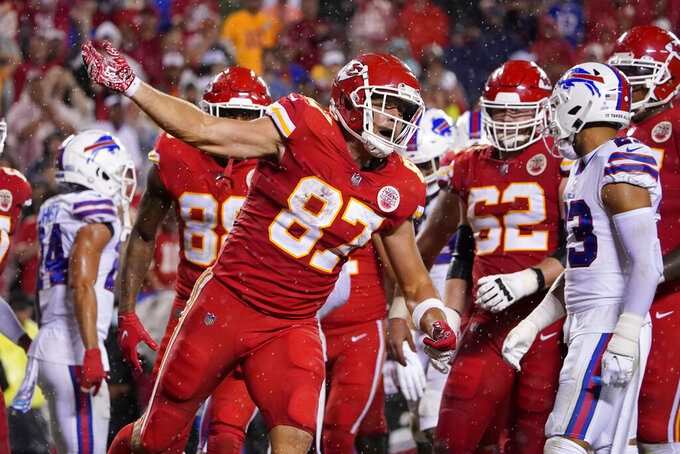 KANSAS CITY, Mo. (AP) — Chiefs coaches and athletic trainers occasionally force Travis Kelce to take a limited role in practice, just as they did this week as the team prepares to visit the Tennessee Titans on Sunday.

It’s usually the last thing the 32-year-old tight end wants to do.

“I was itching at the bit to have every single rep that I could possibly get out there,” Kelce said Thursday. “That’s just who I am. I’m a big believer in getting my reps in during the week, making sure everything looks good.”

There’s no doubt Kelce will take the field on Sunday against the Titans, yet his career hardly started as an NFL iron man. He played just one game as a rookie in 2013 without a catch before a microfracture knee surgery ended his season.

Since then, Kelce has played 116 games while sitting out just twice – season finales in 2017 and 2020 when head coach Andy Reid rested his starters. He’s also made a catch in each of those 116 games.

Two weeks ago Kelce suffered a stinger late in the game against Buffalo, and this time of year aches and pains can pile up for a player who remains the focal point of the Kansas City offense. He shrugs off the notion that the hits come at a bigger price at age 32.

“No, I can remember coming in here on a Wednesday in Week 7, 8, whatever it is right now, 6, 7, 8, somewhere in there and just feeling sore, trying to get acclimated to the game and how the length of the season can take over in terms of just discomfort,” Kelce said.

That attitude helps explain why Kelce continues performing at a level unheard of for tight ends at this stage of their career.

Because of the new 17-game season, he also might challenge his own league record for receiving yards for a tight end of 1,416 set last season. He also owns the NFL record for tight ends with five consecutive 1,000-yard receiving seasons. With 468 yards through the first six games, he’s nearly halfway to a sixth.

There have only been 12 seasons of 1,000 yards for tight ends past the age of 30, and Kelce has two of them, along with Tony Gonzalez and Greg Olsen. He’s on pace to become the first with three. His receiving yards in each of the past two seasons are the best for any tight end past age 30.

On top of that, Bieniemy says the Chiefs ask Kelce to do far more than simply catch the football from quarterback Patrick Mahomes.

“We ask him to do so much, we mentally exhaust him,” Bieniemy said. “By the end of the game, you’ll see him doing these motions, he’s walking around trying to make sure he can get himself set. "

Kelce credits the teachings he received from veterans early in his career about preparing for longevity in the NFL.

“You’ve got to make sure that you’re doing the right things, getting the blood flow going through the body,” Kelce said. “I learned that at a young age through a lot of the veteran guys, and sure enough it just gets you through the entire season trying to be as healthy as possible."

“But the thing I love about Travis is this: He’s going to give you all that he has, and that’s all that matters,” Bieniemy said. “The thing you know, when needed he’s going to find a way to get it done.”

NOTES: LB Anthony Hitchens did not practice on Thursday because of a triceps contusion. He appeared on the practice field as an observer with his right arm in a sling. ... WR Tyreek Hill (quad contusion) and LG Joe Thuney (fractured hand) did not practice Thursday but remain likely to play on Sunday against the Titans. ... Defensive coordinator Steve Spagnuolo said containing RB Derrick Henry is his squad’s No. 1 focus against the Titans. “They understand that this is the guy that makes it go, this has got to be the main focus, population to the football.”