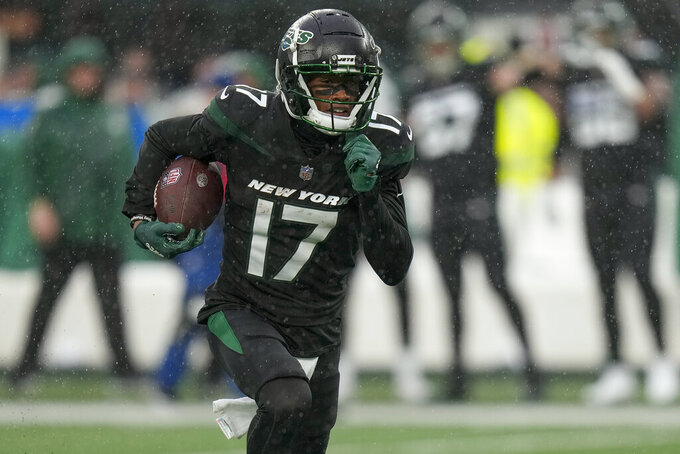 New York Jets wide receiver Garrett Wilson (17) carries the ball to the end zone after coming down with a catch against the Chicago Bears during the second quarter of an NFL football game, Sunday, Nov. 27, 2022, in East Rutherford, N.J. (AP Photo/Seth Wenig)

Here are six oft-scoring reasons to celebrate in Week 13. These are the best bets to score in the NFL this week.

Only Jamaal Williams has rushed for more TDs (13) than Chubb (12) this season, but Williams isn’t playing the Texans this week as Chubb is. Houston is our best matchup for opposing RBs in Week 13, and Chubb’s -275 odds to score are indicative of the favorable situation. Deshaun Watson’s return to the field only enhances Chubb’s chances to get into the end zone.

Perhaps Ekeler isn’t as masterful on the ground as some of the higher-scoring backs in the league, but what he misses between the tackles he more than makes up through the air. Ekeler leads the league in receiving TDs for running backs (five). This week’s matchup is a boon for Ekeler on the ground or through the air as the Raiders are the fourth-best matchup for running backs across the board. Ekeler has found the end zone in seven of his past eight games and he could make it eight of nine in Week 13.

Even with Tony Pollard also in the Dallas backfield, Elliott is still the favorite in the red zone as he’s scored six TDs in his past four games. Only six backs have more rushing TDs than Elliott (seven) on the season and Kenneth Walker III is the only one of them who has appeared in as few games as Elliott (nine). One of the best offenses in the league when Dak Prescott is under center, the Cowboys get into scoring position early and often. And Elliott is usually the first line of offense at the goal line. He’ll go up against the 10th-best matchup for opposing running backs, the Colts, who are comparatively the fourth-worst matchup for opposing WRs.

Brown has scored six times in his past six games as the primary pass-catcher for the Eagles in the red zone, now that Dallas Goedert is on injured reserve. Only Davante Adams (10) and Stefon Diggs (nine) have more TDs than Brown (seven) among WRs, and each of them have at least 30 more targets than Brown on the season, showing just how efficient Brown is with his opportunities. He should see plenty of opportunities this week against a Titans team that is stifling against the run, they’re a top six rushing defense, but weak against the pass. The Titans are the third-best matchup for opposing WRs. Seeing 95% of snaps in Week 12 and coming in with -105 odds to score, Brown is one of the best bets at his position to hit the end zone this week.

It took a minute for Garrett Wilson to get going in fantasy football, but the talented rookie has put together games of at least 90 yards or a TD in three of his past four appearances now and is coming off of a two-TD game with Mike White under center. Wilson and the new-look Jets face a Vikings team that has been putting up points through the air and they’ll have to do likewise to stay competitive. The Vikings are also our fourth-best matchup for opposing WRs so Wilson and company will be able to get open downfield and into the end zone.

After a four-week absence, Chase may return to game action against KC in a rematch of last season’s AFC championship game. He was close to playing in Week 12, so Chase could be raring to go in this matchup that pits the Cincy WR group against a secondary that’s our sixth-best matchup for opposing WRs. Tied for the fourth-most receiving TDs for a WR (six), with four fewer games under his belt than the guys in front of him, Chase could find the end zone if he hits the field this week.