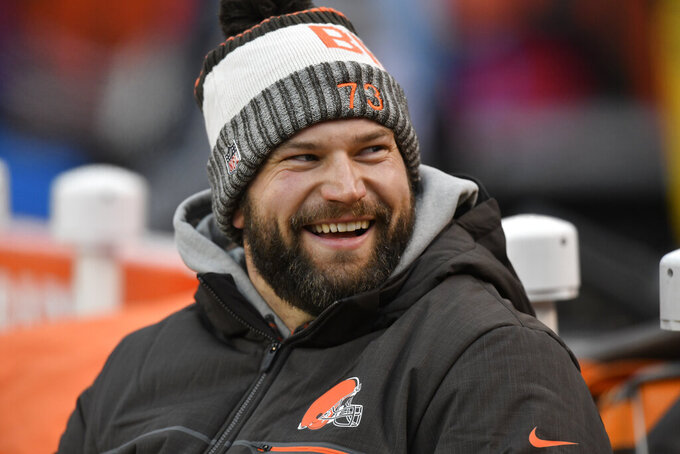 FILE - Cleveland Browns offensive tackle Joe Thomas sits on the bench during an NFL football game between the Cleveland Browns and the Green Bay Packers, Sunday, Dec. 10, 2017, in Cleveland. Thomas is one of five first-year eligible players among 28 modern day semifinalists for the Pro Football Hall of Fame’s class of 2023. (AP Photo/David Richard/File)

Joining Revis as candidates for induction next year are offensive linemen Jahri Evans and Joe Thomas, defensive lineman Dwight Freeney and linebacker James Harrison. Each last played in the 2017 season.

Henry Ellard and London Fletcher are semifinalists for the first time. Albert Lewis, a semifinalist in 2013, is also on the list. Ellard, who retired following the 1998 season, and Lewis, who also retired in 1998, are in their final year of eligibility as modern era players.

Torry Holt returns for the ninth time, Hines Ward and Darren Woodson are semifinalists for the seventh time and Ronde Barber makes the list for the sixth time. Zach Thomas is a fifth-timer and James Willis and Reggie Wayne are back for a fourth time.

The 28 semifinalists will be reduced to 15 finalists before the final voting process in January. The inductees will be announced on Feb. 9 during NFL Honors, the prime-time awards show when The Associated Press reveals its individual award winners for the 2022 NFL season, including Most Valuable Player and Coach of the Year.

Four finalists previously announced are Don Coryell in the coaching category, and Chuck Howley, Joe Klecko and Ken Riley in the senior category.