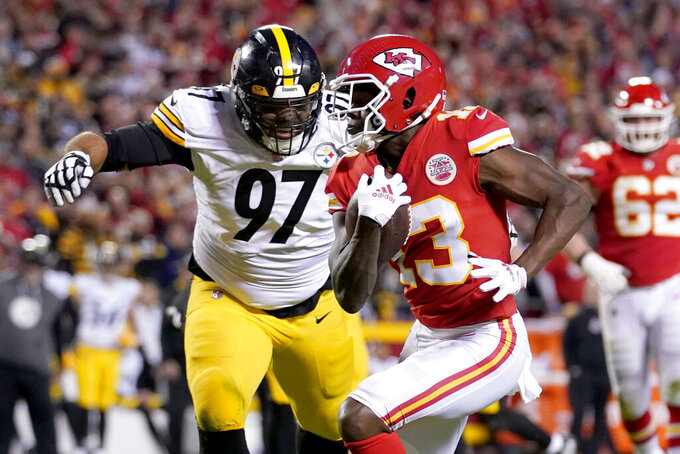 The Steelers have the worst rush defense in the league, but they were able to keep running back Nick Chubb and the Browns in check when the AFC North rivals met in Cleveland on Halloween. Heyward and the Steelers will need to do it again — and possibly with a depleted defensive front — against the Browns on Monday night football at Heinz Field if they want to keep their playoff hopes alive.

“I think the key is playing team defense,” Heyward said Friday. “The run needs to be stopped, so we can make a team one dimensional. It’s easier said than done, but we were able to do a lot of things that put us in a good position.”

Wormley, who was acquired in a 2020 trade with Baltimore, has started 13 of 14 games. Wormley missed last Sunday’s loss at Kansas City with a groin injury, but was a full practice participant on Thursday prior to his diagnosis. Rookie fifth-round pick Isaiahh Loudermilk is likely to start his second consecutive game if Wormley can’t play on Monday.

Wormley, who has a career-high six sacks, was key in the Steelers’ win at Cleveland earlier this season with a sack, one quarterback hit and a tackle for loss.

The Steelers ranked No. 11 in the league against the run in 2020, but they’re last this season. They lost a pair of veterans early, as Stephon Tuitt hasn’t played a snap because of a knee injury, while Tyson Alualu fractured his ankle in September against Las Vegas.

Still, the Steelers managed to neutralize Chubb during an October win at Cleveland. The Browns managed just 96 yards rushing after averaging 170 yards entering the game. Chubb, who missed the previous two games with a calf injury, had 61 yards on just 16 carries.

“I just think we were playing Chubb after he got hurt, and he was coming off an injury,” Heyward said. “They just seem like they’ve become more cohesive. They have three running backs who are really good.”

The Browns average a NFL-best 5.13 yards per attempt and are currently the No. 3-ranked rushing team in the league, led by Chubb, D’Ernest Johnson and Kareem Hunt. Chubb is third in the NFL with 1,143 yards and eight touchdowns despite missing three games. He has one 100-yard effort and a 4.4 yards-per carry average in six career games against Pittsburgh. Chubb had 126 yards and a score, as the Browns rushed for 219 yards, but committed four turnovers during a two-point loss last week at Green Bay.

Heyward feels that stopping first-down runs will be key on Monday.

“You have to make sure you win first down to help yourself on the back end,” Heyward said. “If you can start a drive and get to second and long, then they’re trying to play catch-up, and third down becomes an advantage your way.”

Heyward was pleased with the run defense the first time around against the Browns. The Steelers will have to do it again, and likely without several key pieces up front on defense, if they want to have a shot at reaching the playoffs for the second straight season.

“It’s not an easy task,” Heyward said. “They have a lot of good athletes, a powerful offensive line and a great running game. We have to keep running to the ball. We have to make sure it’s not just one guy there. It has to be all 11.”