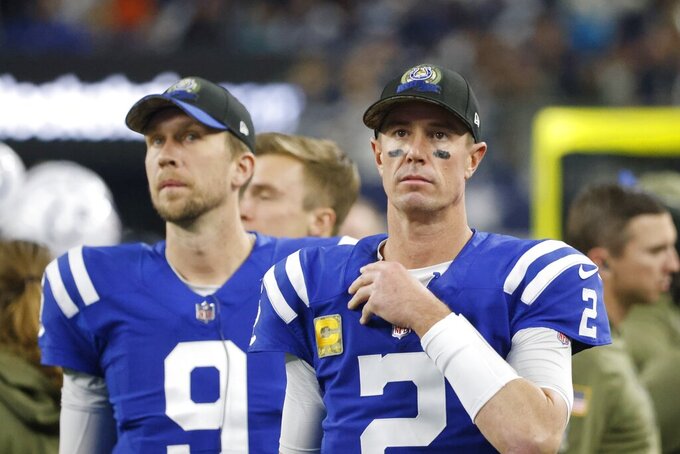 INDIANAPOLIS (AP) — The Indianapolis Colts thought they'd be contemplating their playoff possibilities during their bye week.

Instead, a disastrous season has them on the verge of being mathematically eliminated.

They've changed quarterbacks twice, fired coach Frank Reich, fired offensive coordinator Marcus Brady and are working with a revamped and short-handed staff under interim coach Jeff Saturday. And when Indy returns to work next week, more changes could be coming.

“We’re going to look at everything — no position in particular, but everybody — and look and see what we think is going to be best,” Saturday said following last week's 54-19 drubbing in Dallas. “I told the guys we’ve got a four-week season. That’s almost a quarter of the season, and it’s for all the marbles. So we need the best 11 on the field."

Indy (4-8-1) has spent all season searching for that very combination. Nothing's worked.

NFL rushing champion Jonathan Taylor struggled with an ankle injury and saw his carries dwindle because the low-scoring Colts were playing catchup so often. He's reverted more to the 2021 form as Saturday opted to place more emphasis on the run during his four-game tenure.

Three-time All-Pro linebacker Shaquille Leonard has only played in three games this season — including one half in a season debut ruined by a collision with teammate Zaire Franklin. He missed three more weeks with a broken nose and appeared in two more games before having his second back surgery since June. He's expected to miss the rest of the season.

Even the traditionally trusty offensive line has scrambled to plug leaks with a mishmash of lineups that have allowed a league-high 46 sacks and dozens more hits.

By early November, Irsay had seen enough. He made his first midseason coaching change since taking the reins from his late father a quarter-century ago and hired Saturday from the broadcast studio even though he no prior coaching experience at the pro or college level.

Now for the first time since taking the job, Saturday can catch his breath and contemplate what, if anything, can be fixed before January's season finale.

“You’d certainly rather have a week where you’re coming off a big win in Dallas,” center Ryan Kelly said Sunday. "But each guy is going to have to look back and reflect on what he’s done so far this year, how he wants the rest of the season to look and the rest of his career to look.”

The truth is with four games left, Indy faces another daunting and perhaps tumultuous future.

As Saturday continues adapting to his new job, Irsay has already promised a vigorous coaching search before deciding Saturday's fate.

If Ryan returns, he will cost $35.2 million against the salary cap. If he doesn't, Indy could save $17.2 million but will be looking for its seventh opening-day starter in seven years.

Taylor and receiver Michael Pittman Jr., the Colts' two most reliable offensive players this season, will be entering the final years on their respective rookie contracts.

And as Saturday implores players to continue fighting, fans largely want Indy to play for a higher draft pick so it can finally select Andrew Luck's long-term replacement.

Amid all of it, Saturday continues working toward a brighter future. He has already said rookie left tackle Bernhard Raimann will remain in the starting lineup regardless of mistakes. And less than 12 hours after saying Ryan would remain the starter, Saturday backtracked slightly.

“I’m not looking at Matt any different than anybody else, but yeah we’re looking at all of it,” he said Monday when asked about potentially benching Ryan again. "We didn’t play nearly well enough (Sunday in Dallas), especially at the end. So yeah, we’re looking at it all and let’s see what we can do to get ourselves a chance to win these games.”

All of which leaves one giant question looming over the Colts: What will they look like when they return to the field next week at Minnesota (10-2)?

“You’re not changing coaches in the middle of the season if it’s not bad, so I knew what I was signing up for,” Saturday said. “The effort, the energy, enthusiasm these guys are playing with, they are battling. You talk about a gut check, you talk about, ‘We don’t quit,' I appreciate those things.