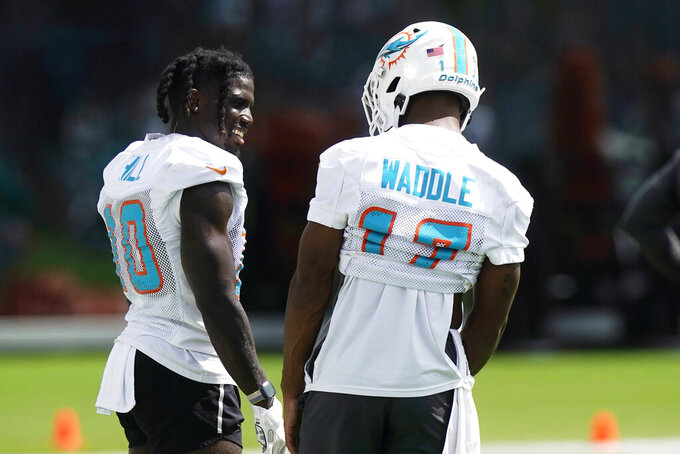 MIAMI GARDENS, Fla. (AP) — When Tua Tagovailoa has been asked about the Dolphins’ commitment to him as their franchise quarterback, his answers have followed a similar theme: He feels that the team is all-in on him in 2022.

Tagovailoa, entering his third year in the NFL, will begin a pivotal season after injuries and tumult within the team hampered his first two seasons. Miami ranked 22nd in scoring offense last year as its offense struggled throughout the season. Despite that, the Dolphins finished 9-8 in a rollercoaster season that had the team lose seven straight games then win eight of the final nine.

Now, Tagovailoa has a new coach, speedy receiving options and an all-around talented team to help him take the next step in proving his ability to be the Dolphins’ quarterback of the future.

Last season, the Dolphins were reportedly interested in trading for Deshaun Watson, now the Browns’ quarterback, and the team was recently disciplined by the NFL for having “impermissible communication” with Tom Brady in 2019.

Still, Tagovailoa said he feels the team’s confidence in him remains high.

“I came in 2020 so whatever happened in 2019, I can’t even speak on that,” Tagovailoa said of the team’s reported interest in Brady. “I was here in 2020 and I’m still here and I’m blessed to be here. If it has to do with support from the team, I think the team is all-in with me and all of the guys that we have now.”

To help ensure Tagovailoa’s success, the Dolphins brought in a plethora of playmakers on offense, including the three-time All-Pro Tyreek Hill, who was one of the league’s elite deep threats with the Kansas City Chiefs.

Miami signed Hill to a $120 million, four-year extension that makes him one of the highest-paid receivers in NFL history. In six NFL seasons, Hill has 479 catches for 6,630 yards and 56 scores.

Hill and second-year receiver Jaylen Waddle will make up one of the fastest receiving duos in the NFL. And they know it.

Miami hired Mike McDaniel, the former 49ers offensive coordinator, to replace Brian Flores, who was fired despite posting winning records in two of his three seasons in Miami.

Afterward, Flores sued the Dolphins, the NFL and two other teams, alleging racist hiring practices for coaches and general managers. He also accused Ross of incentivizing him to lose games during his first season with the team to help Miami get the top draft pick.

The NFL said Flores’ claims were “without merit,” and the same investigation that found the team guilty of tampering found that the Dolphins did not intentionally lose games during the 2019 season.

McDaniel had been credited with constructing San Francisco’s creative running game, which at times featured receiver Deebo Samuel as a rusher. The Dolphins run game has struggled in recent seasons. They haven’t had a 1,000-yard rusher since 2016 (Jay Ajayi, 1,272) but in the offseason, they brought in Chase Edmonds, who had 592 rushing yards last season, Raheem Mostert, and Sony Michel in hopes of bolstering their rushing attack.

‘IT STARTS WITH ME’

The Dolphins returned most of their starters from a year ago, including veteran cornerback Xavien Howard, whom they signed to a five-year extension with nearly $51 million in new money. They brought in linebacker Melvin Ingram, resigned defensive end Emmanuel Ogbah and exercised the fifth-year option on defensive tackle Christian Wilkins.

Even with a talented roster, it will be difficult to unseat the Buffalo Bills in the AFC East, but the Dolphins are primed to have a better record than a year ago and end their playoff drought.

They open the season on Sept. 11 at home against the Patriots, and then go to Baltimore to face Lamar Jackson and the Ravens in Week 2. They’ll have four more home games before their bye week in Week 11, including facing the Steelers and their former head coach, Flores, who is a defensive coach on Mike Tomlin’s staff.

Miami's road games in the second part of the season include trips to face San Francisco, the Chargers and the Bills. The Dolphins close the season at New England and then against the Jets at home in their regular-season finale.