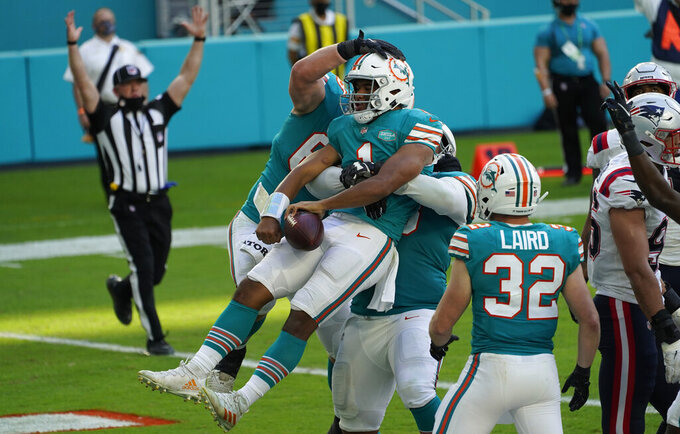 Coach Brian Flores started the rebuilding process in Miami a year after Jon Gruden did the same in his return to the Raiders.

Both coaches traded away big-name players for premium draft picks and reshaped the roster in hopes of reviving once-proud franchises. While Flores arrived a year later than Gruden, he has the Dolphins well ahead of the Raiders in the rebuilding process.

Surprising Miami (9-5) heads to Las Vegas (7-7) on Saturday night in playoff position, but with little room for error in the top-heavy AFC in an impressive one-year turnaround for a team that lost its first seven games in Flores’ debut season last year.

“Since day one, there was never a doubt in my mind after I met Coach Flores and got around the organization that we could do some good things,” defensive tackle Christian Wilkins said. “But I just hope that good things can continue to keep happening for us, but it’s all about putting the work in, putting the work in each and every week and just keeping moving. I’m just excited to be a part of it.”

The Dolphins can clinch a playoff spot with wins against Las Vegas and Buffalo in the final two weeks as the rebuild has happened quicker than expected.

“In December, when you’re playing in meaningful games, there’s a little bit of added anxiety or stress, if you want to call it that; but it’s good to kind of go through that,” Flores said.

The Raiders had hopes of being in that position just a few weeks ago when they had a 6-3 record.

But they have lost four of five games and are on the brink of being eliminated for the third straight year under Gruden and for the 17th time in the past 18 seasons.

“I believe in us,” quarterback Derek Carr said. “I do believe that we have the right kind of people, I do believe that. I’ve been around when times are tough, you’re playing a big game or things like that and the morale, people, the way they talk, the way they practice, it’s not good football. It’s not good for an organization. I believe we have the right things and the right pieces to build on and that’s why I’m always optimistic and why I feel that way.”

Dolphins rookie Tua Tagovailoa has been looking up to Raiders backup quarterback Marcus Mariota ever since he met him as a fourth grader growing up in Hawaii. They’re both of Samoan descent and Tagovailoa followed Mariota’s path to Saint Louis High School to college stardom to first-round pick.

“Marcus has just been the standard a lot of the kids back home look to as a person, as a human being and being as good as he was, that didn’t change who he was as a person,” Tagovailoa said.

There was a chance they both would start this week after Mariota played well in place of an injured Carr last week. But Carr appears to be healed from the groin injury and is likely to start for Las Vegas.

For the fourth year in a row, the Dolphins are unlikely to have a rusher reach 750 yards. But in last week’s win over the Patriots, the Dolphins rushed for 250 yards, their highest total since 2016, and undrafted rookie Salvon Ahmed became their first 100-yard rusher in 32 games.

“If you have a good ground game, it will definitely up your chances to win,” center Ted Karras said.

Miami might be content to keep it on the ground against the Raiders, who rank 25th in run defense.

Raiders tight end Darren Waller made his first Pro Bowl this week as part of a record-setting season. Waller has a career-high 93 receptions for 967 yards. He needs 12 catches in the final two games to break Hall of Famer Tim Brown’s franchise record of 104 set in 1997. Waller has 425 yards receiving the past three weeks, the most ever in a three-game span for a tight end.

“He’s not a tight end. He’s not a typical NFL player. He’s a slash player,” Gruden said. “He might be the best split end that I’ve coached. He can go play flanker. We put him in the slot, he can run option routes and choice routes. We could throw it over your head with Waller. He might be the fastest guy on our team and he’s well-conditioned and he’s smart.”

The Dolphins’ pass-catching group has been banged up lately, and rookie Lynn Bowden Jr. has taken advantage of more playing time. In the past three games, he has been targeted 20 times and has 17 catches for 160 yards, while showing an ability both to get open and avoid tacklers. Bowden was drafted by the Raiders in the third round, but struggled in training camp and was dealt to the Dolphins for a 2021 fourth-round pick.

“Watch kids that come up today, and which ones played tag growing up,” Miami offensive coordinator Chan Gailey said. “If you played tag, then you know how to make a guy miss. He played a lot of tag, I guess.”