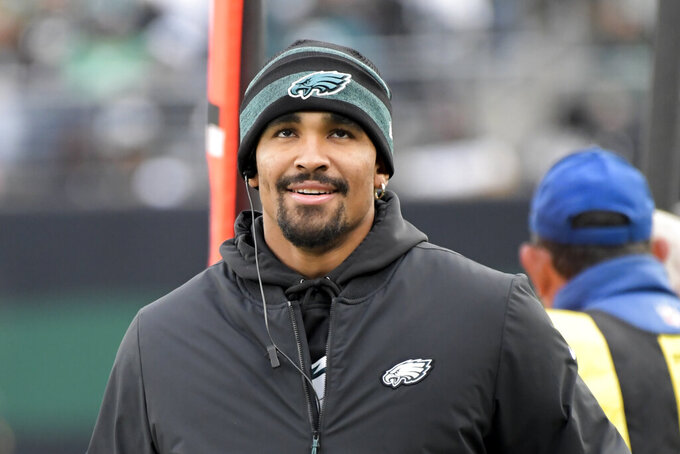 BETTING LINE: Eagles by 4 1/2, according to FanDuel SportsBook.

AGAINST THE SPREAD: Washington 5-8; Philadelphia 7-6.

WASHINGTON PLAYER TO WATCH: RB Antonio Gibson leads the team with 1,057 yards from scrimmage, including 836 rushing. He’s only averaging 3.9 yards per carry but has game-breaking speed.

EAGLES PLAYER TO WATCH: TE Dallas Goedert had six catches for a career-high 105 yards and his first two-TD performance in Week 13. He leads all NFL tight ends with an average of 14.5 yards per catch.

SERIES NOTES: Washington has won two in a row after the Eagles had won six straight. Washington clinched the NFC East title on the final day of the regular season in 2020 by beating Philadelphia on the road. Former Eagles coach Doug Pederson pulled Hurts for third-string QB Nate Sudfeld in that game, sparking outrage from the Giants. New York needed Philadelphia to win to secure the division at 6-10. Instead, Washington won it with a 7-9 record.

STATS AND STUFF: Washington plays the second of five consecutive games to end the regular season against a fellow NFC East opponent. Washington is the first team since the 1995 Tampa Bay Buccaneers to close a regular season with five divisional opponents in a row. ... Washington enters with a 1-1 division record. ... Washington will try for its first three-game winning streak against the Eagles since taking five in a row from 2014-16. ... Gibson, who was a WR in college at Memphis, is second in the NFC with 836 yards rushing this season. Dalvin Cook has 978. But Gibson also has six fumbles. ... Heinicke ranks second in the NFL since Week 10 with a 71.5 completion percentage. ... Washington leads the NFL in time of possession since Week 10, when it increased its emphasis on the running game. ... Aided by the use of a ball-control offense, Washington’s defense is allowing 302.4 yards from scrimmage per game since Week 10, which ranks third in the league behind New England and Indianapolis. ... Hurts can join Lamar Jackson as only QBs with 50-plus yards rushing in seven straight games and can tie Kyler Murray (12) for third-most 50-plus rushing games by a QB in hisfirst two seasons. ... Sanders had a season-high 142 scrimmage yards, including 120 rushing, in Week 13. ... RB Kenneth Gainwell had a career-high 54 yards rushing against the Jets. ... Goedert had eight catches for 101 yards and one TD in the last game vs. Washington. ... WR DeVonta Smith is the first Eagles rookie receiver with 50 catches since Jordan Matthews in 2014. ... DT Javon Hargrave has a career-best 7 1/2 sacks.

FANTASY TIP: Goedert is coming off his best game and has settled in as a top target with the departure of Zach Ertz.