Early turnovers just the start of dismal loss for Lions 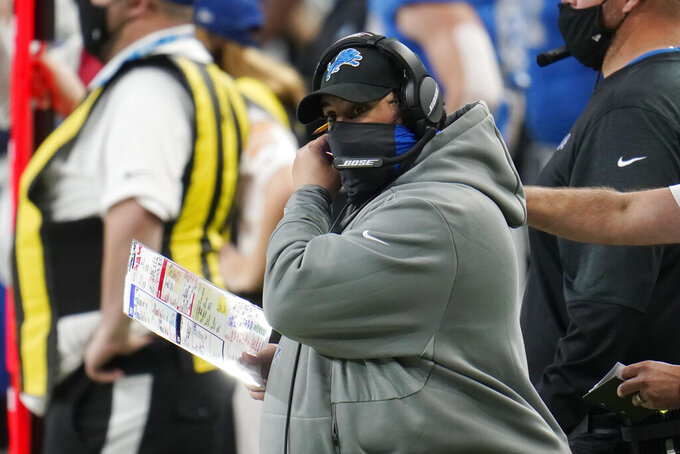 Detroit Lions head coach Matt Patricia adjusts his face mask during the second half of an NFL football game against the Houston Texans, Thursday, Nov. 26, 2020, in Detroit. (AP Photo/Paul Sancya)

DETROIT (AP) — The latest debacle for the Detroit Lions began early in their Thanksgiving matchup with Houston, when they turned the ball over three times in a span of eight offensive plays.

Of course, that was hardly the full extent of Detroit's problems during another dismal home loss.

The Lions were still in the game after those early giveaways, but their defense offered little resistance as Deshaun Watson and the Texans rolled to a 41-25 victory Thursday.

It was a chance for a national audience to see what Detroit has been for much of this season. The Lions scored first, then failed to build on their sharp start. By the time the game was over, it was hard to remember that it had ever been all that close.

“I felt like we were moving the ball and we did things to hurt ourselves," said Adrian Peterson, who ran for two first-half touchdowns. "Credit to the Houston defense of course, but it’s the National Football League. When you turn the ball over three times, it’s hard to come back from that, especially when you’re giving away points as well.”

Detroit has lost eight of its past nine home games.

The Lions led 7-0 when Houston defensive lineman J.J. Watt picked off a short pass by Matthew Stafford and took it back 19 yards for a touchdown. That was a great play by one of the game's superstars, but Detroit compounded its troubles when Jonathan Williams fumbled on the Lions' next play from scrimmage.

Kerryon Johnson also fumbled on the first play of the second quarter, although the Detroit defense quickly got the ball back by forcing a turnover of its own. The Lions took a 14-13 lead on Peterson's second TD, but by then, Watson was settling into a groove.

The Houston quarterback threw for 318 yards and four touchdowns on the day, and it seemed like no down-and-distance situation was all that daunting for the Texans. Watson threw a 33-yard TD pass to Duke Johnson on first-and-20 that gave Houston a 20-14 lead. Later in the second quarter, Watson converted on second-and-24 on a drive that ended in a field goal.

The Texans led 26-17 after three quarters, then Watson threw two touchdown passes in the fourth to turn the game into a rout. Now the speculation about Detroit coach Matt Patricia's future will only intensify, especially since the Lions don't have another game until Dec. 6.

“My focus every day is on the guys in that locker room and working as hard as I can to help them be successful," said Patricia, who hasn't been willing to share many thoughts on his job status.

The Lions (4-7) still have more than a quarter of their schedule to come, but on Thursday, only one team appeared headed in the right direction. The Texans (4-7) have won three of their past four, while Detroit remains stuck in the same mediocrity that's defined Patricia's three-year tenure.

“There’s no woe is me," Stafford said. "There’s a lot of people in this world who don’t get to do what they love or have lost family members. I do feel lucky to do what I do, especially in a time like this.”