With Engram iffy, Giants may be counting on TE Kyle Rudolph 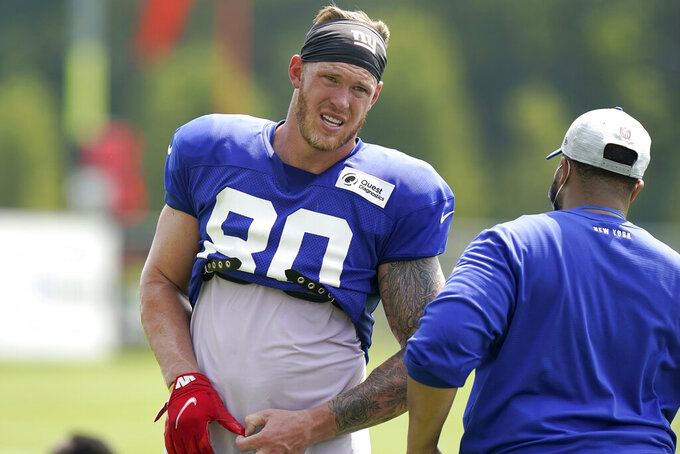 FILE - In this Aug. 25, 2021, file photo, New York Giants tight end Kyle Rudolph (80) removes his gloves before facing reporters following a joint NFL football practice with the New England Patriots in Foxborough, Mass. Rudolph signed as a free agent in the offseason. He did not play in any of the three preseason games because of offseason surgery on his foot. (AP Photo/Steven Senne, File)

EAST RUTHERFORD, N.J. (AP) — With the status of starting tight end Evan Engram uncertain because of a calf injury, the New York Giants have to hope veteran Kyle Rudolph is ready for the season opener.

The long-time Minnesota Vikings tight end watched most of training camp while finishing a long rehabilitation following foot surgery. The Giants had signed him to a two-year, $12 million contract as a free agent in March not expecting the surgery.

Rudolph started practicing when the team went to New England for joint practices late last month. He indicated after practice Monday that he would be ready to play Sunday against the Denver Broncos.

“I feel great. I’m extremely excited. I feel like Week 1 in the NFL is always a really, really exciting week," Rudolph said. "You know, every team in the NFL, the goals are out in front of them. You’ve worked since you came back together virtually in April for this week. Everything that we’ve done through virtual meetings, OTAs, minicamp and training camp is for this."

The Giants may really need the former Notre Dame product who is entering his 11th season.

Engram worked with the trainers before practice on Monday and fellow tight end Kaden Smith did not practice for an undisclosed reason. Smith is expected back Wednesday.

Rudolph said watching has been hard. He was hurt in December and has spent the past nine months getting ready to go again.

When the Giants signed him, it was expected his primary job would be as a blocker with catching passes being his other role. With Engram's injury, things are a little uncertain.

Rudolph said he was never sure what his role would be early in the week in his decade with the Vikings. He would catch 10 balls some games and others he was more involved in pass protection. It depended on the opponent.

The Broncos have two outstanding pass rushers in Bradley Chubb and Von Miller.

“Look at the team that we’re playing, the two guys, they have on the edge,” Rudolph said. “I can guess what my role is going to be for most of the game, but at the same time, you just you have no idea. And that’s part of the beauty of the tight end position.”

Rudolph played in 12 games for the Vikings last season. He caught 28 passes for 334 yards and a touchdown.

Bridgewater sustained major knee injuries in training camp in 2016 and missed that season and most of the next. He spent time with the Saints and Panthers before signing with Denver as a free agent this year.

“I couldn’t be happier for Teddy for his opportunity to be the starting quarterback,” Rudolph said. ”He deserves it. You know what he went through when we were together? The fact that he’s even playing football right now is a true testament to him and his work ethic."

Rudolph is ready for whatever happens Sunday at MetLife Stadium.

Coach Joe Judge indicated Saquon Barkley came out of his first contact last week in good condition. He added the team will have a padded practice on Wednesday and the running back who is coming off an ACL injury might be hit again.

Judge would not say whether Barkley will play Sunday. He missed all three preseason games.

“Look, that won’t be decided until later in the week,” Judge said. “I want to see how he responds to a couple things physically within his body and make the best assessment going forward for him this weekend and going forward past that.”