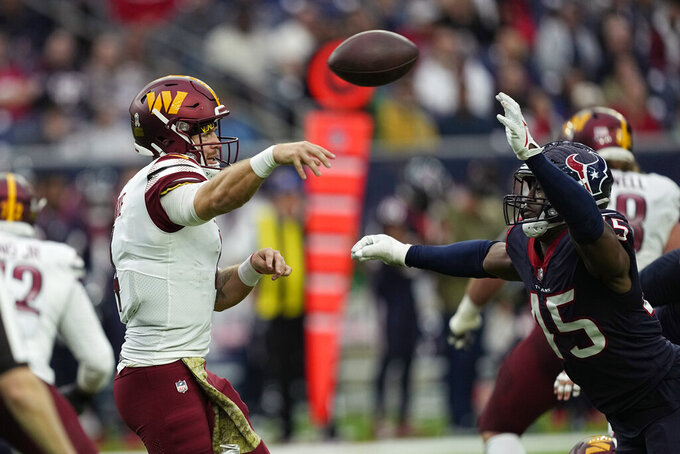 LANDOVER, Md. (AP) — Ron Rivera tried to keep from getting too excited about his Washington Commanders getting on enough of a roll to move into the mix for a playoff spot.

He couldn't contain himself over how he felt about playing host to the Atlanta Falcons on Sunday in a meaningful post-Thanksgiving game.

It's also a little unexpected after the Falcons looked like they were coming into the season in rebuilding or retooling mode and the Commanders lost four of their first five games. But here they are, with 6-5 Washington and 5-6 Atlanta just outside wild-card spots in the NFC and realistic chances at making the postseason. It was something that not long ago seemed improbable.

“You try to earn the right to be in games that matter as you get into Thanksgiving and December,” Falcons coach Arthur Smith said. “Obviously their journey’s been different than ours. You want to be in big games, and this is obviously a big game for both teams and it’s a credit to the players on both sides.”

Atlanta's running game buoyed by new quarterback Marcus Mariota and Washington's steadily improving defense have made this possible. It's still possible only one of these teams makes the playoffs.

Just getting in position to make a run at it would be welcome in Atlanta.

“What’s cool about us is we can continue to improve,” Mariota said. “If we can string these together, when we get to the point where the season is done, I think we’ll be excited about it.”

Much like Rivera, Commanders defensive lineman Jonathan Allen — tied with fellow Alabama product Daron Payne for the team lead with 6½ sacks — is trying not to get too high off this success. As one of the team's captains, he addressed teammates after beating Houston last week to point out some flaws he worried might get lost in the win and wants them to stay focused.

“It’s very easy to be high on ourselves right now, but we still have a lot of football left and we’re just trying to keep the same mentality we had when we were 1-3, 1-4,” Allen said. “You don’t get too ahead of yourselves. You don’t focus on where you’re trying to be. You focus on what you have to do today to get to your goal.”

Mariota has scored touchdowns as a rusher and passer in three games this season, including in last week’s 27-24 win against Chicago. Michael Vick set the team record with four games scoring both as a runner and passer in 2002.

Chicago’s Justin Fields (five) and Cincinnati’s Joe Burrow (four) are the only QBs with more scoring rushing and passing touchdowns this season.

Mariota has passed for 1,878 yards with 13 touchdowns and seven interceptions. He ranks third on the team with 372 rushing yards and is second with four rushing touchdowns.

“Marcus has obviously done a nice job,” Smith said. "He’s a huge part of our offense. There’s a lot of things we ask him to do. He can extend plays, and certainly on designed runs or zone read plays he can make people pay.”

Another QB who can extend plays is Taylor Heinicke, who is now Washington's starter for good despite Carson Wentz returning from surgery to repair a broken finger. The Commanders are 4-1 since Heinicke took over, and his personality and “play every game like it's my last” style have made him easy to rally around.

“Sometimes he looks like his hair is on fire because he’s so hyper,” Rivera said. “I mean the dude is constantly going, and I think his teammates feed off of that energy, which has been a big plus. I think there’s a lot of things that go into why (name Heinicke the starter), and winning is obviously the first and foremost thing because when you’re winning, it is easy to buy into it and get behind it.”

Atlanta put tight end Kyle Pitts on injured reserve with a knee injury, and MyCole Pruitt replaced him against Chicago. But Pruitt is not the only option at the position. Parker Hesse and Anthony Firkser also have experience there, and the team is awaiting the return of rookie Feleipe Franks from a calf injury.

When asked how Pruitt rose on the depth chart to become Pitts’ top backup, Smith said: “There are different ways to manufacture things so it’s never one for one. But certain things, they all have unique skill sets. MyCole is very good blocker at the point of attack in multiple schemes. He’s got a very good feel for space, a smart football player. He’s played in a lot of big games.”

Washington's stout defense and its propensity to run the ball, whether with backs Antonio Gibson and rookie Brian Robinson Jr., receiver Curtis Samuel or Heinicke, could help in games like this one with rain in the forecast and others later in the season that could include cold and snow.

“The teams that go win Super Bowls, they can run the ball well and they have a good defense and that’s what we’ve been doing for weeks now,” Heinicke said.