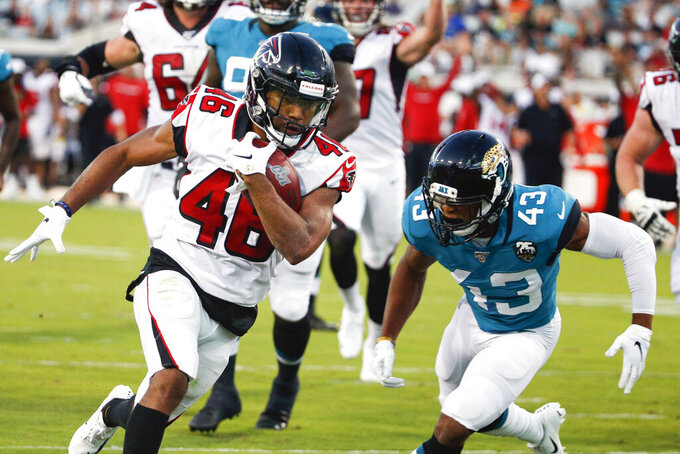 Atlanta Falcons running back Tony Brooks-James, left, runs past Jacksonville Jaguars defensive back Picasso Nelson (43) for a 15-yard touchdown run during the first half of an NFL preseason football game, Thursday, Aug. 29, 2019, in Jacksonville, Fla. (AP Photo/Stephen B. Morton) 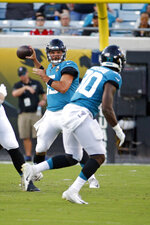 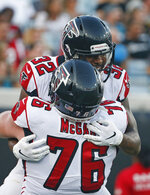 JACKSONVILLE, Fla. (AP) — Atlanta's kicking situation has some clarity for the first time in weeks — thanks to a familiar face.

Veteran Matt Bryant is scheduled to try out for coaches and front office personnel at the Falcons' training facility Friday. Assuming the 44-year-old kicker is healthy, he's expected to sign on for a 19th NFL season — his 11th with Atlanta.

"Like all positions, you want to make sure you're evaluating and doing what is best for the team," coach Dan Quinn said following a 31-12 victory at Jacksonville in the preseason finale. "Matt is a guy we obviously have great faith in and belief in. ... Like most things, it's easy to put the cart in front of the horse, but we're looking forward to having him here."

Bryant and the Falcons parted ways in the offseason. Bryant left Atlanta as the franchise's leading scorer (1,122 points). His 158 points in 2016 set the team's single-season scoring mark. He also has played for the New York Giants, Indianapolis, Miami and Tampa Bay.

Even before Giorgio Tavecchio missed his fifth field-goal attempt of the preseason, the Falcons had plans to bring Bryant back.

Tavecchio was wide left from 53 yards late in the second quarter. He fell to 4 of 9 on field-goal attempts this preseason, also missing from 54, 52, 52 and 39 yards.

"We haven't met the mark," Quinn said. "We had a lot of faith in Giorgio last year. ... I wouldn't say we've lost faith, but our first experience with him was an excellent one and right now we're not hitting that same stride so that's what prompted the looking."

The Falcons worked out three kickers — Elliott Fry, Younghoe Koo and Blair Walsh — last week and discussed the possibility of bringing in Bryant. They settled on Walsh, at least temporarily. Walsh made his lone attempt Thursday night, hitting from 46 yards.

His field goal was part of Atlanta's first exhibition victory in three years.

The Falcons (1-4) ended a 12-game losing streak in the preseason. They did it while resting 35 players, including all their starters.

The Jaguars (0-4) held out 40 players, including all their first-teamers.

Danny Etling completed 15 of 25 passes for 174 yards and a touchdown. Etling also scrambled for 67 yards. Tony Brooks-James, who grew up in nearby Gainesville, ran 15 times for 137 yards and two scores. He had a 52-yard TD scamper just before the two-minute warning.

Etling and Brooks-James are likely headed to the Falcons' practice squad.

Jacksonville finished winless in the preseason for the first time in franchise history and scored its fewest points (29). The previous low was 59 in 2004.

Rookie Gardner Minshew completed 11 of 26 passes for 79 yards for Jacksonville. Minshew has locked up the backup spot behind Nick Foles, but the team might not have total faith in the sixth-round draft pick.

"You want to see him do better," Marrone said. "It's always in the back of mind, 'Well, hey, what about if he was with these guys?' But you want to see that production, so it's tough. There's time I felt really, really good and times I want to see more."

Falcons open the regular season at Minnesota on Sept. 8

Jaguars begin at home the same day against Kansas City.