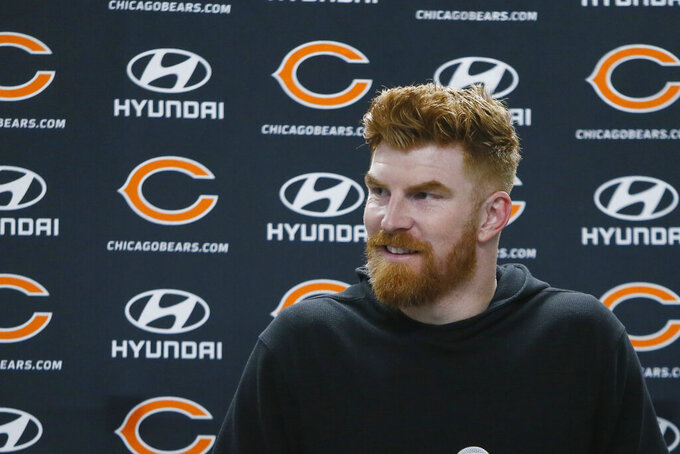 BETTING LINE: Cardinals by 7½, according to FanDuel SportsBook.

TURNOVER DIFFERENTIAL: Cardinals plus-8; Bears minus-4.

CARDINALS PLAYER TO WATCH: Edge rusher Chandler Jones has had a bit of an all-or-nothing season. He’s second on the team with eight sacks, but five came against the Tennessee Titans in the season opener. He’s been more disruptive the past few weeks and had two sacks against the Seahawks in the team’s most recent game on Nov. 21.

BEARS PLAYER TO WATCH: RB David Montgomery. The third-year pro got off to a good start, running for 309 yards while averaging 4.5 per carry through the first four games before hyperextending his knee against Detroit on Oct. 3. He missed the next four games and has struggled in the three since he returned, averaging 3.8 yards per carry on 44 attempts. Montgomery ran 17 times for 46 yards last week.

KEY MATCHUP: Cardinals TE Zach Ertz vs. Bears S Tashaun Gipson Sr. Ertz is coming off his best outing this season with eight catches for 88 yards and two touchdowns against Seattle. He has also been a thorn for the Bears in three regular-season games against them with 20 catches for 233 yards and two TDs as a member of the Eagles. It will likely be up to Gipson to contain Ertz if Chicago doesn't put a linebacker on him.

KEY INJURIES: Cardinals QB Kyler Murray (ankle) and three-time All-Pro WR DeAndre Hopkins (hamstring) are the biggest question marks. Both have missed the past three games but returned to practice on Wednesday. ... The Cardinals will definitely be without RB Chase Edmonds (ankle), who is still on injured reserve. ... Coach Kliff Kingsbury said G Justin Pugh (calf) would likely be a game-time decision. ... Bears QB Justin Fields practiced Wednesday for the first time since he cracked ribs in the loss to Baltimore on Nov. 21. Veteran Andy Dalton replaced the rookie in that game and started last week and will again on Sunday. Fields remains the No. 1 quarterback when healthy. ... LB Roquan Smith (hamstring) exited against Detroit. ... WR Allen Robinson (hamstring) and DT Akiem Hicks (ankle) have missed the past two games. Hicks is out. ... LB Khalil Mack suffered a season-ending foot injury this year.

SERIES NOTES: The Bears have won five of the past seven games overall in the series. But the road team has the advantage lately, with the visitor winning five straight.

STATS AND STUFF: Arizona owns the best record in the NFL. ... The Cardinals will try to improve to 7-0 on the road this season. They’ve won the previous six road games by 10 points or more. They’re just the third NFL team to ever accomplish that feat, joining the 1968 Cowboys and 1936 Bears. ... The Cardinals have used eight different starting lineups on the offensive line this season, including seven in the past nine games. ... RB James Conner has rushing touchdowns in five straight games, which ties a franchise record. ... LB Markus Golden leads the Cardinals with 10 sacks. ... Rondale Moore had a franchise rookie record 11 catches against Seattle. ... The Cardinals have had 34 offensive plays gain at least 25 yards this season. That’s second most in the league behind Las Vegas, which has 36. ... Arizona has forced 15 fumbles this season, which leads the NFL. The Cardinals have recovered 11 of those fumbles — second in the league. ... Arizona’s offense has used 36 players, second in the league behind Tennessee. ... Chicago beat winless Detroit on a last-second field goal by Cairo Santos. ... Though the Bears are one game out of the NFC’s seventh and final spot, they are one of eight teams in the conference with either four or five victories. ... Chicago is tied for second in the NFL with 32 sacks. LB Robert Quinn has 11 and is tied for fourth in the league. ... WR Darnell Mooney had 123 yards against Detroit after finishing with 121 in the loss to Baltimore four days earlier. ... Dalton threw for a Bears season-high 317 yards last week and a touchdown.

FANTASY TIP: Conner could be in for a big game against a banged-up defense, particularly if Smith is unavailable for Chicago.