Giants and Cardinals meet with playoff hopes on the line 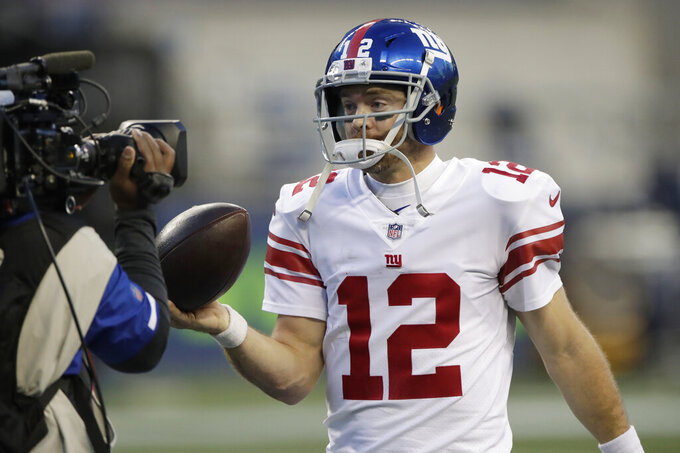 New York Giants quarterback Colt McCoy holds a game ball as he is interviewed after an NFL football game against the Seattle Seahawks, Sunday, Dec. 6, 2020, in Seattle. The Giants won 17-12. (AP Photo/Larry Maurer)

EAST RUTHERFORD, N.J. (AP) — The Arizona Cardinals and New York Giants are doing something they haven't managed in a few years. They're playing games in December with a chance to get into the playoffs.

Only the teams are heading in different directions going into Sunday's game at MetLife Stadium.

The NFC East-leading Giants (5-7) are riding a four-game winning streak in attempting to become the NFL's first time to start winless in five and make the playoffs. It would be their first postseason appearance since 2016, and only their second since 2011.

The Cardinals (6-6) have lost three straight and four of five in seeing their hopes dim for their first postseason berth since 2015.

"We’ve got four games left, and each game is crucial," Cardinals quarterback Kyler Murray said. "We know that; everyone knows that. We understand that it’s a 1-0 mentality, and we’ve got to win.”

Arizona is catching a break with its schedule. After this week, it will have home games against Philadelphia (3-8-1) and San Francisco (5-7) before a regular-season finale at the Rams (8-4).

“It’s been a couple years since we’ve played meaningful games in December, and that’s what everybody starts the season trying to do," Cardinals coach Kliff Kingsbury said.

The Giants and rookie coach Joe Judge face a tougher road to the playoffs. After Arizona, they have a home game with Cleveland (9-3), a road game at Baltimore (7-5), and a home game against Dallas (3-9).

Quarterback Daniel Jones, who missed last week's win over Seattle with a hamstring injury, is hoping to return this week. If he can't, Colt McCoy will start his second straight.

“I’m treating this just like I would any other week, and preparing and just getting ready to go,” McCoy said. “These guys are really good. They’re playing for a lot just like we are, so we have to be ready to go.”

During the current winning streak, the Giants' defense has held each of the last four opponents to 20 points or less. The best effort came last weekend when the high-scoring Seahawks were limited to 12 points.

New York has not played defense this well since it had a similar run in the final two games of the 2011 regular season and the four playoff games en route to winning the Super Bowl. The last time it had a four-game streak of allowing 21 or fewer points in the regular season was in 2004.

Murray was on pace for a 1,000-yard rushing season at one point. That’s changed dramatically over the past three games. He’s averaged just 20.3 yards on the ground in losses to the Seahawks, Patriots and Rams.

Murray said teams have changed their defensive plan and are forcing him to give up the football.

The Cardinals got good news when veteran receiver Larry Fitzgerald was reinstated from the reserve/COVID-19 list after missing the past two games.

The 37-year-old Fitzgerald is more of a role player at this point of his career – he has 43 catches for 336 yards and no touchdowns in 10 games – but his presence on the field, on the sideline and in practice has been missed.

“He is a tremendous leader and presence for us, obviously,” Kingsbury said. “He brings a level of confidence because of what he’s accomplished and what he can do on the field, there’s no doubt.”

The Cardinals and Giants have two of the best rushing offenses in the league. Arizona is ranked fourth overall, averaging 150.6 yards. New York has moved up to No. 11 after rushing for at least 100 yards in seven straight games and eight of nine. It had a season-high 190 against Seattle, with Wayne Gallman gaining a career-high 135.

The Giants' run defense also is improving. It is fourth overall, giving up an average of 96.7 yards. The Cardinals are No. 22, giving up 123 per game.

Special teams used to be the Giants' most effective unit. It has struggled the past two games.

A missed block helped Seattle get a safety on a blocked punt. A Seahawks player recovered the ball at the back of the end zone, but he was just out of bounds.