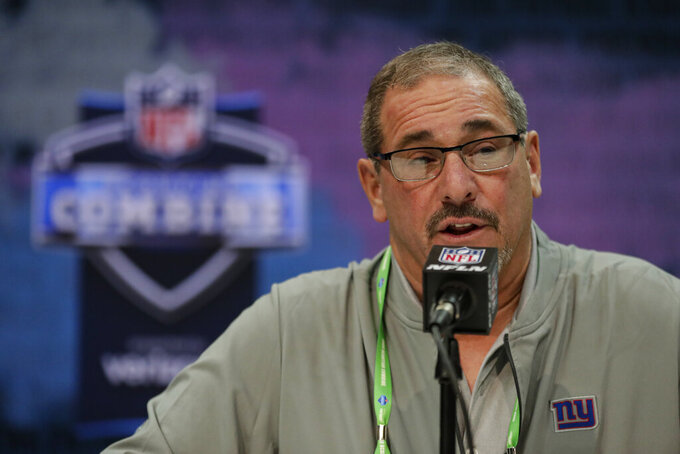 FILE - In this Feb. 25, 2020, file photo, New York Giants senior vice president and general manager Dave Gettleman speaks during a press conference at the NFL football scouting combine in Indianapolis. Gettleman made three draft-day deals in which he moved up and down, found promising players at need positions and picked up three extra choices for next year's event that supposed to deeper in talent (AP Photo/Michael Conroy, File)

The New York Giants were surprisingly aggressive in free agency last month, and they didn't change the game plan in the NFL draft.

General manager Dave Gettleman rolled the dice on three draft-day deals, found promising players at need positions, and picked up three extra choices for next year's talent-rich draft in an effort to get New York back to playoffs for the first time since 2016.

"It's all about calculated risk," Gettleman said Saturday. “You go to Vegas, go to Atlantic City, some people are aggressive, some people aren’t. It’s instinct. Sometimes it’s just looking at the board and seeing where it’s going to take you. We felt we were aggressive in the offseason, both in free agency and in the draft.”

The move that stands out most was on the first day of the draft.

Football analyst Daniel Jeremiah had said NASCAR would have right-hand turns before Gettleman traded down in the first round. Then Gettleman did the unexpected. The 70-year-old GM traded the 11th overall pick to the Bears for the 20th pick overall, a fifth-rounder this year, and first-and-fourth rounders next year.

It hit big for both teams. The Bears got Ohio State quarterback Justin Fields. The Giants got speedy Florida receiver Kadarius Toney, one of their top needs.

The Giants added edge rusher Azeez Ojulari of Georgia in the second round and cornerback Aaron Robinson of Central Florida in picks that involved more wheeling and dealing up and down on Friday. It also filled more needs with value selections.

New York, 6-10 in Joe Judge's first season, had three picks Saturday. It took outside linebacker Elerson Smith of Northern Iowa in the fourth round and running back Gary Brightwel l of Arizona and cornerback Rodarius Williams of Oklahoma State, both in the sixth round.

“We feel like we’ve added a strong group of players at a variety of positions,” Gettleman said. “We've added playmakers, We’ve added pass rushers and we've added corners. We feel good about what we’ve done.”

Judge said the picks and free agency moves have increased the competition at almost all the team's positions, the lone exception being the offensive line. Value and need at the position never seemed to match.

The Giants are going to lots of candidates for getting to the passer. Leonard Williams returns from a career-best season, and Lorenzo Carter and Oshane Ximines are back from injury. Linebackers Cam Brown and Carter Coughlin have a year of experience and the draft picks — Ojulari and Smith — have potential.

Coming out of FCS school Northern Iowa, the 6-foot-6 Smith had 21 1/2 sacks combined in 2018 and '19, but he did not play last season. He showed well against stiffer competition at the Senior Bowl.

Ojulari had 8 1/2 sacks at Georgia despite missing time with a knee injury.

NEXT YEAR What makes the extra picks for next year so important is many college football players decided to use the extra year of eligibility the NCAA granted for the 2020 season due to the coronavirus pandemic to stay in school.

Chris Pettit, Giants director of scouting, said next year's draft class is going to be large and will stress the scouting departments.

“At least now we have the picks to really hit it out of the park in next year, hopefully," he said.

New York added the Dolphins' third-round pick in 2022 in dropping from 42nd to 50th in the second round so Miami could take Notre Dame offensive lineman Liam Eichenberg. New York took Ojulari.

Rodarius Williams, the second of the two sixth-round picks, is the older brother of Cleveland Browns cornerback Greedy Williams.

The younger Williams, 23, was a second-round draft pick in 2019 out of LSU. Rodarius Williams, who will turn 25 in September, set a record with the Big 12's Cowboys, making 48 straight starts. He had two career interceptions.

With the NFL not having a combine, the Senior Bowl was the one event where Giants coaches and staff were able to sit down and talk to the athletes, as well as examine them and see them play. It's not surprising five of the six players they took played in the game. The exception was Brightwell, who caught the Giants' interest because of his special teams play along with his ability as a halfback.

“To be honest, the guys you only see on tape you don’t have enough interaction with,” Judge said. “You may like him as a player and there’s just something missing that you can’t really stand on the table and say, ‘This guy fits our locker room. This guy fits our culture.’ So the interactions are definitely crucial for us.”