Giants kept Manning in dark about future and Beckham trade 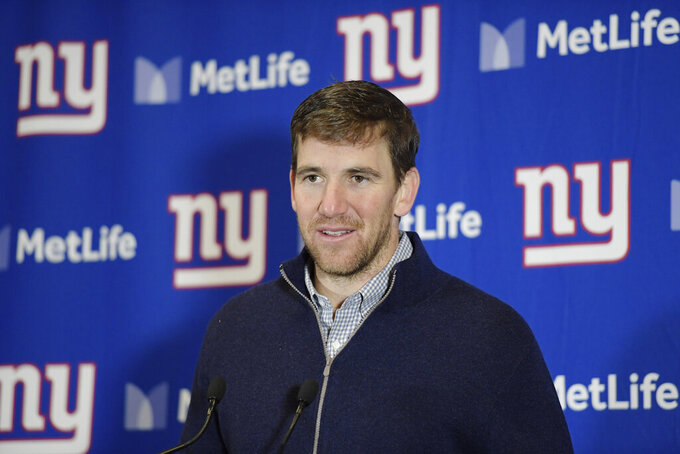 FILE - In this Dec. 31, 2017, file photo, New York Giants quarterback Eli Manning speaks during a news conference after an NFL football game against the Washington Redskins, in East Rutherford, N.J. The New York Giants kept two-time Super Bowl MVP Eli Manning in the dark until recently about his future with the team, and didn’t give him a warning about the trade of star receiver Odell Beckham Jr. to the Cleveland Browns. Speaking as organized team activities started Monday, April 15, 2019, the 38-year-old quarterback said the Giants informed him a month ago that he would be returning for a 16th season. (AP Photo/Bill Kostroun)

EAST RUTHERFORD, N.J. (AP) — The New York Giants kept two-time Super Bowl MVP Eli Manning in the dark until recently about his future with the team, and didn't give him a warning about the trade of star receiver Odell Beckham Jr. to the Cleveland Browns.

Speaking as organized team activities started Monday, the 38-year-old quarterback said the Giants informed him a month ago that he would be returning for a 16th season.

The stunning news of the Beckham deal came secondhand: Manning read it on a crawl across the bottom of his television screen.

In other areas, Manning expects the Giants, who have won eight games over the past two seasons, to draft a quarterback. He is entering the final year of his four-year, $84 million contract.

Manning is looking forward to running the offense in Pat Shurmur's second season as coach. Other players will have step up to replace Beckham, but he noted the offense ran well in the final four weeks when his top receiver was sidelined with a quad injury.

"I think every year I am just worried about that next year," Manning said. "That is what I am thinking about. I am thinking about right now with this team. Getting rolling, getting wins and doing whatever it takes to be a good teammate to get this team winning football games."

After going 5-11 last season, the Giants offered Manning no guarantees he would be back in 2019. In his postseason talk with general manager Dave Gettleman and Shurmur, Manning told them wanted to return. They evaluated the team for roughly two months before letting him know he would have another season.

The Beckham deal was less personal, coming from a TV screen. Then came the texts.

"That is how I found out," Manning said. "The reaction, I wanted to reach out to him. Odell has been a teammate for five years and has been a friend. These circumstances, you think about the player involved. It is more than just a player; it is someone you have a relationship with. You think more about that person, how they are handling it and that they are OK and doing well with it."

The two spoke, and now they have to move on.

"I think after being in the NFL for 16 years, I don't think there are a whole lot of surprises anymore, "Manning said. "You learn to deal with everything. You learn to adjust, you move on and do my job. Do it to the best of my ability and get the players that are here up to speed."

Sterling Shepard, who is the No. 1 receiver since the trade, had a different reaction.

"I was a little shocked at first, like everyone was I think, but you sit back and you look at it, it's kind of the nature of the business," said Shepard, who signed a $41 million contract extension last week. "That was a point for me to really sit back and realize that this is a business, and that's just how things go sometimes."

Heading into the draft next week, the Giants have the Nos. 6 and 17 picks in the first round, the second one coming from Cleveland in the Beckham deal. New York probably needs more help on defense after losing safety Landon Collins to Washington in free agency and trading linebacker/edge rusher Olivier Vernon to the Browns.

Expect a lineman to be taken with the sixth choice. With Manning's age, it's possible they could go with a quarterback at No. 17.

"I can see the Giants getting a young quarterback," Manning said. "I understand that. I still have to do my job. I will do my part, same as last year. Go out there, play quarterback, win football games. That is what I am trying to do."

In talking to the team Monday, Shurmur did not focus on the moves the Giants made in the offseason. He is looking to move forward.