Giants look to win sixth game in a row against Washington 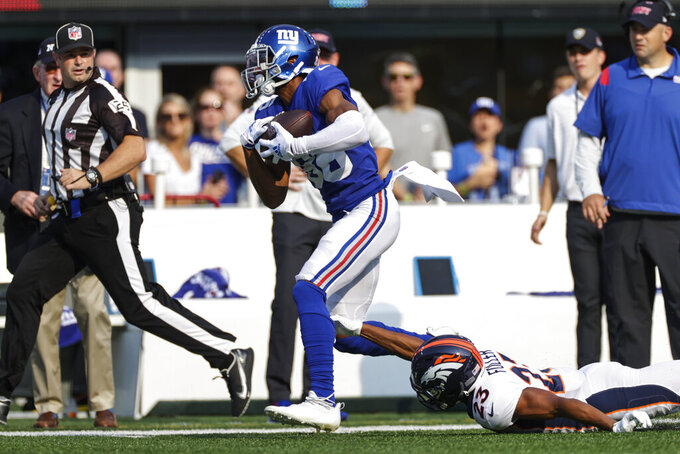 OPENING LINE: Washington by 3 1-2, according to FanDuel SportsBook

GIANTS PLAYER TO WATCH: After missing all three preseason games because of a hamstring injury, WR Kenny Golladay got on the field in Week 1. Despite being rusty and having not worked a lot with QB Jones, Golladay caught four passes for 64 yards. Expect more against Washington from the former Lions receiver who signed a four-year deal for $72 million as a free agent.

WASHINGTON PLAYER TO WATCH: Chase Young was held without a sack and to just three tackles by the Chargers and will need to be more disruptive to make Washington's pass rush a factor. New York's offensive line isn't as stout as L.A.'s, which could open some opportunities for Young and fellow edge rusher Montez Sweat.

KEY MATCHUP: Jones vs. Washington S Landon Collins. Jones has never lost to Washington, and the former Giants defensive back questioned his old team taking the Duke product so early in the first round. Collins has also never beaten New York and is looking like his old self again after tearing his right Achilles tendon last season.

KEY INJURIES: Pro Bowl TE Evan Engram (calf), LB Cam Brown (hamstring) and G Shane Lemieux (knee) are all out for the Giants. RB Saquon Barkley is listed as questionable but expected to play. ... Washington is turning to Taylor Heinicke as starting QB after Ryan Fitzpatrick injured his right hip in the season opener. ... RB Antonio Gibson is expected to be full go after banging up his left shoulder against the Chargers.

SERIES NOTES: The Giants have won the past five meetings, including a sweep last season when Washington finished first in the lowly NFC East. ... Judge is 2-0 and Jones 4-0 against Washington. ... Washington coach Ron Rivera last beat the Giants in 2018 with Carolina. ... Alex Smith was Washington's QB the last time it beat the Giants, in October 2018.

STATS AND STUFF: Since making the playoffs in 2016, the Giants have had four consecutive losing seasons. They started at least 0-2 each of those seasons. ... Jones threw for 267 yards against the Broncos, ran for a touchdown and threw one. He also lost a fumble on a run into the red zone. ... In four career starts against Washington, Jones has thrown eight TD passes and three interceptions. ... Barkley, who missed most of last season with a knee injury, had a career-high 279 yards from scrimmage in his last game against Washington on Dec. 22, 2019. That included a career-best 189 yards rushing, 90 yards receiving and two touchdowns, one rushing and one receiving. ... Barkley was limited to 26 yards on 10 carries Sunday. ... WR Sterling Shepard had seven catches for 113 yards and a TD against the Broncos. He has had a TD catch in two of his past three games at Washington. ... DB Logan Ryan had a forced fumble and recovery on the same play last week and a team-high 10 tackles. In three career games against Washington, he has two interceptions, one forced fumble and a sack. ... Rookie LB Azeez Ojulari last week became the youngest player in Giants history to make a sack. ... This is Washington's first Thursday night home game since 2017. ... Washington does not play another NFC East game until Dec. 12 against Dallas. ... Heinicke is set to start a regular-season NFL game for the just the second time and first since 2018 with Carolina. Heinicke started Washington's wild-card game against Tampa Bay last season. ... Heinicke was 11 of 15 for 122 yards and a TD pass to Logan Thomas in relief of Fitzpatrick in Week 1. ... Gibson had 20 carries for 90 yards and lost a fumble against the Chargers. Gibson is fully recovered from a toe injury that hampered him late last season. ... WR Terry McLaurin finished with a team-high 62 yards receiving last week despite not being targeted for more than a quarter and a half. ... Washington's new-look offensive line allowed one sack but plenty of QB hits and pressure against L.A. ... Washington's defense stopped the Chargers on just 5 of 19 third-down opportunities. Allowing a 73.7% conversion rate ranks worst in the league. ... Sweat and DT Jonathan Allen each sacked Justin Herbert in Week 1. ... LB Cole Holcomb led Washington with 11 tackles last week. ... Rookie CB Benamin St-Juste was a frequent target of Herbert's in Washington's opener and was in coverage for the go-ahead TD pass to Mike Williams. ... DB Bobby McCain had a career-high 10 tackles last week.

FANTASY TIP: Thomas has become to Washington what previous coaching staffs hoped Jordan Reed would be. He's a reliable pass catcher who can create matchup problems. If he continues the same chemistry with Heinicke that he had with Fitzpatrick in training camp and showed the beginnings of last week, Thomas will be in the end zone once again.