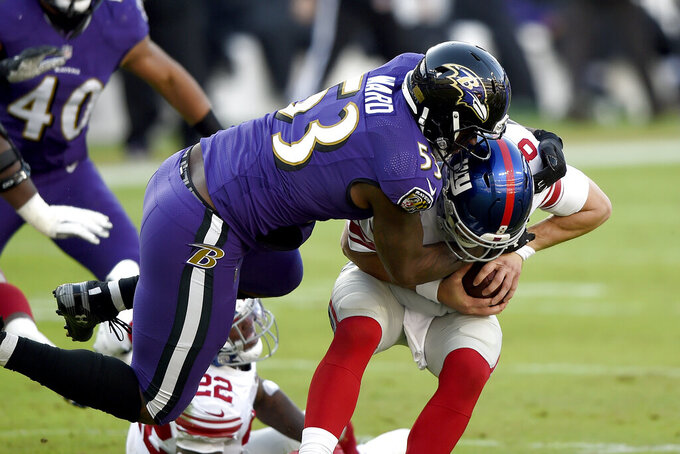 BALTIMORE (AP) — In a bid to keep their playoff hopes alive, the New York Giants needed at least one of two things to happen against Baltimore: Their recently hobbled quarterback had to efficiently direct a foundering offense, or their defense had to play stoutly against a team with a penchant for making opponents play from behind.

As it turned out, the Giants could not pull off either task Sunday. The result was a 27-13 loss that left New York (5-10) hoping for a whole lot of help to extend its season beyond next week.

Second-year quarterback Daniel Jones, who returned after missing two of the Giants’ previous three games with hamstring and ankle injuries, finally got going in the second half. But by then, the Ravens’ relentless running attack had shredded the Giants defense.

Lamar Jackson guided Baltimore to touchdowns on its first two possessions and to a pair of field goals on the following two trips downfield. It was 20-3 by halftime, far too big a deficit for New York's anemic offense.

“We have to find a way to slow him (Jackson) down and we didn’t do a good job of it,” defensive end Dexter Lawrence lamented.

After scoring only 13 points in their previous two games, the Giants began this outing with a three-and-out in which they twice jumped offside and Jones nearly threw an interception.

“We didn’t start the game like we needed to,” Jones said. “We shot ourselves in the foot early on a couple of plays. We got to look at that stuff and clean it up. It makes it tough when you put yourself in that position.”

“It’s frustrating,” receiver Sterling Shepard said. “We got to get off to a better start. We’re not the team that can afford to get off to a start like that, especially against a team like Baltimore.”

It didn't matter much that the Giants outscored the Ravens 10-7 in the second half, because by then Baltimore was just coasting behind a running attack featuring Gus Edwards (85 yards), Jackson (80) and J.K. Dobbins (77).

Jones was better after halftime despite being sacked six times. He finished 24 for 41 for 252 yards.

“We were able to make some adjustments in second half to get some things going," coach Joe Judge said. “We need to get that earlier."

The Giants may not win the NFC East and go to the playoffs. Yet there's hope for the future, if for no other reason they're playing a lot better than when they started 1-7.

Judge said he sees improvement every week. But he was quick to note: “We’re paid to win games. We got to do a better job coaching and a better job playing.”